Why Trump, Clinton both scare Netanyahu

Prime Minister Benjamin Netanyahu fears that if elected president, Hilary Clinton will hit the ground running and not stop until advancing the two-state solution. 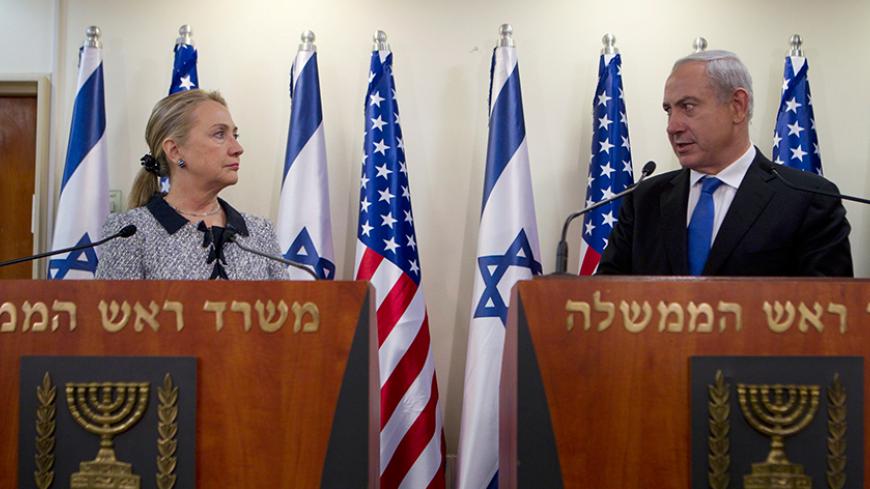 With regard to the presidential campaign in the United States, Prime Minister Benjamin Netanyahu finds himself in the position he hates most: irrelevance.

In the 2008 election campaign, Netanyahu was not yet prime minister, but secretly prayed for the victory of Republican candidate John McCain over the enigma that was Barack Obama.

This time, Netanyahu is helpless. Together with Adelson, Netanyahu sought the “right” candidate on the Republican side and preferred Marco Rubio. But he found himself, like America and the rest of the world, with something else altogether. Donald Trump caught Netanyahu and his people unprepared. Trump is not a “Beltway” man, he’s a total outsider. No one knows what to do with him, how to work with him and what the rules of the game are now.

The situation is not much better on the Democratic side. Hillary Clinton is the last person on the planet that Netanyahu wants to see in the White House, after Obama. Jerusalem is keeping a very close eye on the primaries and is beginning to internalize that Clinton is a done deal. Even her loss in Indiana has not changed this working assumption.

The anticipated race between Trump and Clinton is likely to place Netanyahu in a bizarre situation: He will not have a clue which candidate to support, or which is the lesser evil. Everyone agrees that it’s an impressive matchup.

The Clintons have a tradition of animosity toward Netanyahu. Netanyahu views Clinton as a sworn enemy, worse than Obama, for a simple reason: It will be very hard for him to set Israeli public opinion against her.

The information flowing into Jerusalem worries Netanyahu even more. According to reports transmitted by various Israeli emissaries and sources in the Democratic establishment, Clinton is building an extensive and powerful team that is preparing for the “day after” on the international and Middle East fronts. The team, according to the reports, encompasses several dozen experts. The large majority are volunteer workers, and a small part are on the payroll of the campaign.

Various reports on the issue have already been published in the United States (by John Hudson in Foreign Policy and Josh Rogin on Bloomberg). The names mentioned there do not encourage Netanyahu: Obama's adviser on the Iran deal Jake Sullivan, former State department official Laura Rosenberger and others. According to the reports, other former senior officials consulted include former Defense Secretary Leon Panetta, former top defense official Michele Flournoy and former Undersecretary of State Nick Burns. One way or the other, these are all people who were involved in the catastrophic and chaotic relations created between Netanyahu and the Obama administration over the last eight years.

Netanyahu’s mood can be expected to deteriorate even more when looking closer: Clinton’s task force also includes a special team that focuses on the Israeli-Palestinian issue, a permanent American headache that has worsened over the years. This team is also bad news for Netanyahu. Experts who were involved in the last administration are also included, such as Ilan Goldenberg, Tamara Coffman-Wittes, Derek Chollet, Prem Kumar and probably also David Makovsky. Most of these people are working at the moment as volunteers, but the direction is clear. If Clinton does become the next president of the United States, most of these people will take up key positions in her administration.

Clinton’s goal is simple: If and when she is elected, she hopes not to waste time on overlapping or studying past experience. She will pick up where she left off and hit the ground running. Nothing scares Netanyahu more than her ambitions, while his policy is to waste time. He banks on other political needs forcing the American president to avoid having to make real decisions. Netanyahu succeeded in teaching Obama a lesson in small-minded, devious politics. He actually managed to spend eight years with Obama without making a single significant decision or implementing a significant concession.

The last thing that Netanyahu wants is an American president who knows her stuff and has well-formulated opinions. Clinton is viewed as a supporter of Israel, but one that does not like Netanyahu. “We think that she won’t allow herself not to renew the diplomatic process between Israel and the Palestinians,” a source close to Netanyahu told Al-Monitor on condition of anonymity. This is bad news for the prime minister, who has succeeded in freezing the process and totally keeping it from the international agenda, at almost no cost to himself.

Clinton was secretary of state; she managed the contacts with Netanyahu and was party to the demand to freeze Israeli settlement construction in the West Bank. In retrospect, this emerged as one of the salient mistakes of the Obama administration in his first term of office. With regard to this aspect, Netanyahu has some faint hopes. “We believe that Clinton understands the enormity of the error of that [settlement construction] freeze,” said a senior diplomatic source, quoting words of another associate of Netanyahu who spoke to the premier. “Hopefully, she’ll draw the [correct] conclusions.”

Nevertheless, Netanyahu is aware of Clinton’s opinion of him, and his opinion of her is not much better. He understands that the burden of proof rests on him. In conversations with his close advisers, he complains openly and frequently about his bitter fate. “I only got Democratic presidents,” he once said to one of his associates, according to a diplomatic source who spoke to Al-Monitor on condition of anonymity. “I had Bill Clinton in my first term of office, and Barack Obama in my second, third and fourth terms. Now I’ll get Hillary Clinton.”

At the moment, Netanyahu is trying to prepare himself for the two poor alternatives he faces. If Clinton becomes the next president of the United States, Netanyahu will need to exploit all the political and personal talents at his disposal to win her over. In this context, a decisive role will most certainly be accorded to American-Israeli businessman Haim Saban, who is one of the Clintons’ closest associates. Saban keeps in touch with Netanyahu and served as mediator when needed between the Obama administration and Netanyahu in recent years. Saban will be a key player indeed.