How will Bibi meddle in next US presidential race?

Associates of Israeli Prime Minister Benjamin Netanyahu estimate that casino mogul Sheldon Adelson, and subsequently Netanyahu, will soon decide whom to back in the US presidential race. 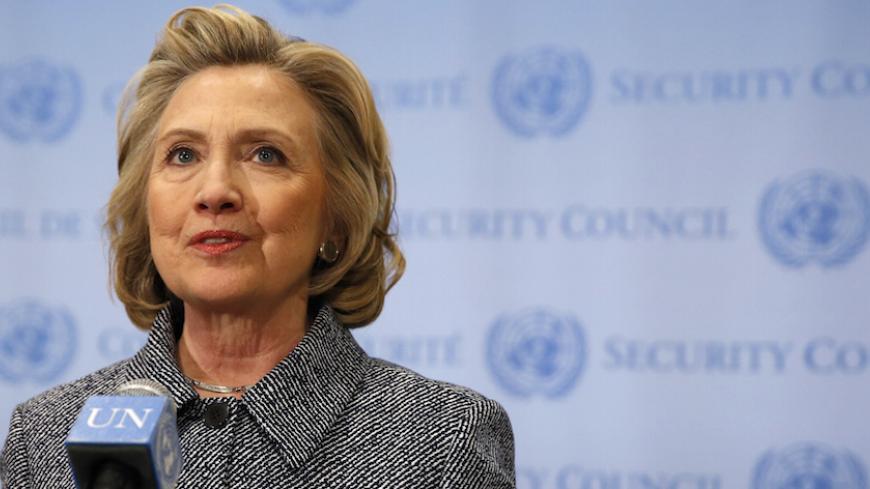 Former US Secretary of State Hillary Clinton speaks during a news conference at the United Nations in New York, March 10, 2015. - REUTERS/Mike Segar

There wasn’t very much nervous anticipation in Prime Minister Benjamin Netanyahu’s office in Jerusalem while waiting to see whether former Secretary of State Hillary Clinton would announce that she was a candidate for president of the United States on April 12. Everyone there had known for a long time that Clinton would toss her hat into the ring en route to the US presidential race. So much so, in fact, that the prime minister’s closest advisers had included her candidacy in their assessments of the situation. Every step that Clinton took had been recorded and filed in Jerusalem over the past year, with Clinton perceived as an inevitable fate, a bitter pill anticipated in advance, and an obstacle that must be traversed.

“Netanyahu has been prime minister for nine years already,” sighed one of Netanyahu’s people this week, “and he has yet to be lucky enough to serve for even 15 minutes with a Republican president in the White House. He keeps getting Democrats like [Bill] Clinton and [Barack] Obama, and now maybe another Clinton. Do people really say that Netanyahu is lucky? Well, as far as American presidents go, he’s been remarkably unlucky.”

No one in Jerusalem feels that this is an emergency. They have far more urgent things to worry about, in particular the Iranian nuclear threat. The prime minister is right in the middle of a “world war against the White House,” with both sides “going for broke” and using almost every weapon in their respective arsenals. The American side is actually trying to reduce tensions and placate the Israelis, who are charging full steam ahead anyway. This includes pushing for and backing a proposed sanctions bill by Sens. Mark Kirk, R-Ill., and Bob Menendez, D-N.J., a new proposed bill by Sen. Bob Corker, R-Tenn., for congressional oversight of any nuclear deal, the full-throttle deployment of the American Israel Public Affairs Committee and the ominous pressure now being exerted on Democratic senators. In this battle, Netanyahu has adopted a "take no prisoners" approach, with a special focus on President Barack Obama. The precise identity of Obama’s successor is hardly as important for the moment. As they say, “We’ll cross that bridge when we get to it.”

For the moment, it is impossible to tell what kind of president Hillary Clinton would be, at least as far as Israel is concerned. While there is a tendency to regard Republican presidents as being more sympathetic to Israel and Democrats as more severe, history has shown that there is no real rule. If anything, the outcome is random. George H.W. Bush was very tough in his approach toward Israel. In fact, he is considered to be the person who brought down Prime Minister Yitzhak Shamir’s Likud government by refusing to provide Israel with loan guarantees in 1991. In contrast, Bill Clinton, a Democrat, was considered very supportive of Israel — some would say he was practically a Zionist — throughout Prime Minister Yitzhak Rabin’s time in office. Then Netanyahu came to power and the whole relationship became intolerable.

Clinton later played some role in Netanyahu’s defeat by former Prime Minister Ehud Barak in 1999. Those were the days when the US president was the most popular person in Israel. If there was some way that Clinton could have run for prime minister, he would have defeated every possible rival. Today, of course, the situation is the polar opposite. Obama has succeeded in positioning himself as the “enemy of the people.”

Clinton’s successor, George W. Bush, began his first term giving Israel the cold shoulder. This in turn forced Prime Minister Ariel Sharon to deliver his famous “Czechoslovakia Speech” in October 2001, shortly after the attack on the Twin Towers in New York (where Sharon called upon the West not to abandon Israel, the way Czechoslovakia was abandoned in 1938). The feeling at the time was that the world in general, and the United States in particular, would “throw Israel under the bus” in the wake of Islamic terrorist attacks against the bastions of the West, meaning that Israel will no longer be a priority. In the end, the exact opposite happened. Abandoning Israel was "delayed." And according to Netanyahu’s beliefs and approach, Israel was only thrown under the bus after eight (good) years of George W. Bush in the White House, by Obama.

What can be concluded from all this? That there is no way to foretell how any American politician will relate to Israel, be that politician a Republican or a Democrat. It all depends on the particular circumstances at the time, external factors, the identity of the Israeli prime minister and many other variables. What can be done is to assess the potential politician’s opinions, preferences, statements and relationships throughout his or her career, before becoming president, and to use the utmost caution in trying to derive conclusions from them.

That being the case, things get rather complicated when it comes to Hillary Clinton. During her husband’s term in office, she was considered to be somewhat to the left of the president. In terms of Israel, she was chillier than her husband and did not share his warm, special and supportive relationship with the Zionist state. But this approach changed over the years. Once Clinton became an influential Democratic senator from New York, it was quite apparent that she had become a different person. She was surrounded by Jewish cronies, some of them wealthy, and became much closer to Israel. As she prepared to run for the Democratic nomination for president, her engagement with Israel grew deeper and she was considered to be one of its foremost advocates.

Her term as Obama’s secretary of state added nothing positive to the complicated relationship between the Clinton family and Netanyahu. Clinton was thought to have spearheaded the firm American demand for a settlement freeze in the occupied territories, and she had several harsh incidents with Netanyahu, almost throughout her entire time in office. This gave her a chance to understand from up close what her husband meant when he asked his advisers after his first meeting with a younger Prime Minister Netanyahu in 1996, “Who's the fucking superpower here?”

When she completed her term as secretary of state, Clinton had left behind a significant puddle of bad blood between her and Netanyahu, even if that puddle seems rather minor now, compared with the dark ocean separating the prime minister from the Obama administration during the president’s second term. In life, just about everything is relative, and it seems to me that if it was up to him, Netanyahu would, at this very moment, replace Obama with Clinton without giving the matter a second thought. On the other hand, he would not replace Obama with Clinton nearly two years from now.

Clinton has a network of confidants, acquaintances and supporters, all of whom are close friends of Israel, but this entire circle is hardly among Netanyahu’s avid supporters. Clinton certainly would have been happy if Zionist Camp leader Isaac Herzog had won the March 17 election in Israel but, in fact, he lost. This means that over the next few months she will have to adopt the body language and artificial messages of support toward Israel and its current government, so as not to become a target during this early stage of the campaign.

The Clintons tread through Israeli politics at particularly high resolutions. Their intimate familiarity with Israel’s political jungle is remarkable. Even now there are many amusing anecdotes making the rounds in Israel about how involved former President Clinton and his wife, possibly the next president, have been in local political maneuvering. Once, in 2009, Bill Clinton consulted with a senior Israeli diplomat on the issue of, “Should [then Kadima Party Chair] Tzipi Livni join the Netanyahu government.” At the time, Clinton said that Prime Minister-elect Netanyahu asked him personally to put pressure on Livni to forgo her refusal to join his government, but Clinton did not pick up the phone to call her, at least as far as is known. Maybe he also thought that she should stay out of the government.

One thing is certain, however. The next 18 months in the campaign for president of the United States will be fascinating, with Israel playing a key role in it. Will Netanyahu once again throw his support behind the Republican candidate, just as he did with Mitt Romney in the previous campaign? The assumption among those closest to Netanyahu is that he will. “Netanyahu did something that no Israeli prime minister ever did before, by taking a position regarding the presidential campaign. He didn’t pay any price for it, so there is no reason for him to show any caution the second time,” I was told this week by one of Netanyahu’s former advisers.

It is also believed that the final decision will be made by billionaire Sheldon Adelson, based on the positions of the various candidates and the identity of the Republican candidate. Should Jeb Bush win the Republican nomination, for instance, Adelson might be far less enthusiastic, and so, by extension, would Netanyahu. On the other hand, it should not be forgotten that Romney also failed to evoke the enthusiasm of Adelson and Netanyahu, at least at first, but that they threw both their support quite heavily behind him later on.