What's next for Hezbollah in Syria?

Hezbollah will have a difficult time finding a replacement for slain commander Mustafa Badreddine. 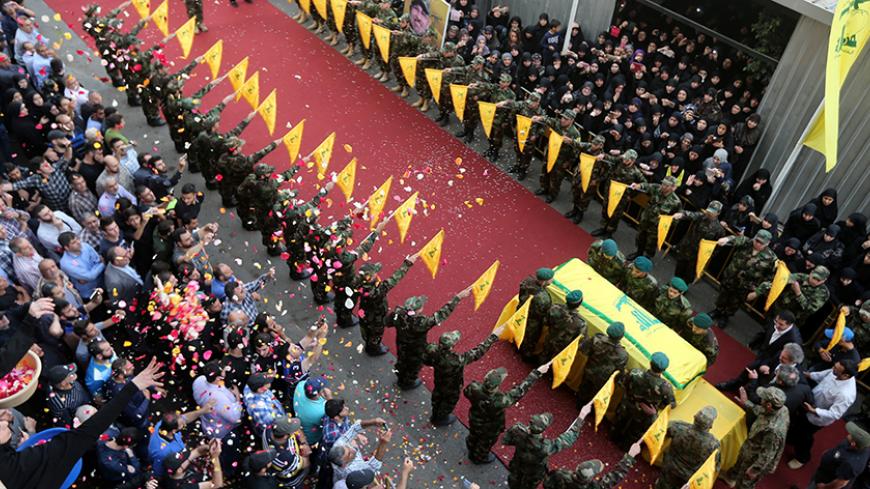 People toss rose petals as Hezbollah members stand near the coffin of top Hezbollah commander Mustafa Badreddine, who was killed in an attack in Syria, during his funeral in Beirut's southern suburbs, Lebanon, May 13, 2016. - REUTERS/Hasan Shaaban

Many people know the name Mustafa Badreddine, but few could say they really knew the Hezbollah high commander in Syria, who died last week in an explosion at one of the group’s bases near Damascus International Airport.

Even those who had met the man knew him by different names.

Hezbollah announced that its most prominent commander, known among his ranks as Zulfiqar (a legendary sword in Islam), was killed in an artillery bombardment carried out by area groups of “takfiris,” fundamentalists who excommunicate other Muslims. According to an Iranian military source in Syria who spoke to Al-Monitor on condition of anonymity, Badreddine wasn’t alone at the time of the explosion.

“There was a high-ranking meeting. A senior Iranian commander was with him, along with other Hezbollah senior officers. As they finished the meeting [and started to disperse], a shell fell close to [Badreddine]. Shrapnel to the back of his head killed him immediately … while there were a few light injuries among the others.”

Losing the high commander of its forces in Syria makes the stakes very high for Hezbollah in a war that has seemed to go nowhere in five years. According to the Iranian military source, there is no way to make up for Badreddine's loss.

“He’s a combination of several elements — experience, charisma, military vision and shrewdness — that are hard to find in one person. He had them all in him. But this doesn’t mean Hezbollah’s men are going to be affected on the ground,” he told Al-Monitor. “Resistance bloc fighters execute plans and tactics that are drawn by the joint military command, so there’s no fear in this regard on field operations. But, yes, the command will miss his capabilities and broad vision.”

The source added, “Hezbollah’s military today isn’t the same as a decade ago. Today they are more institutionalized. Several great commanders have fallen in the past couple of years, but this didn’t change the course of the war. … The best farewell to [Badreddine] is to continue this war until the victory that he was looking for [is achieved].”

But in fact, the killing of Badreddine is going to have a deep effect on Hezbollah’s military command. For the first time in many years, there will be a new commander from outside the legend of Badreddine and his brother-in-law, commander Imad Mughniyeh.

A source close to the organization said, “There are other commanders who are going to rise. The mythical effect of Mughniyeh and Badreddine didn’t allow others to be heard clearly. This might be a chance for fresh blood to pour into the group’s body — yet in Syria this will have a different effect.”

According to the source, the command in Syria is expected to see more centralization under the Iranians. “Until his death, Badreddine played an important role in the decision-making path in Syria, military-wise. This is due to his character and history. Now the command is expected to solely be in the hands of the Iranians, whereas Hezbollah’s role will be executing decisions taken by the central command.”

Badreddine’s name has been in the media for decades. In 1991, he was said to have taken part in negotiations for the release of Western hostages taken in Beirut by the Islamic Jihad movement. According to the Oct. 16, 1991, issue of the New York Times, Badreddine supervised a secret meeting with former United Nations envoy Giandomenico Picco.

“I heard of his death this morning,” Picco told Al-Monitor on the phone from New York. He said he wasn’t able to say for sure that he had met Badreddine. “They were all masked, but I heard he was with them.”

In 1991, Badreddine was back from Kuwait, where he had been serving a life sentence for allegedly bombing the French and US embassies there. According to Kuwaiti media reports, Badreddine’s nom de guerre was “Elias Saab” and he was a member of the Iraqi Islamic Dawa Party.

An Iraqi who said he was with Badreddine in the prison recalls the story of their escape after the Iraqi invasion. “The prison was isolated completely. There were seven of us — myself; Mustafa Badreddine, who used the name Abu Amin; the well-known Iraqi commander Abu Mahdi AlMohandes; and others from the PLO,” the Iraqi inmate, who refused to give his name, told Al-Monitor.

“Badreddine was trained to use and make explosives; therefore, when the guards fled and we started hearing gunshots, he began planning for our escape. He brought some soap, matches and batteries, and made a small bomb that destroyed the locks.” According to the source, the prisoners were able to flee and stayed in Kuwait for four days before arranging for sea passage to Iran, where they were temporarily detained.

From 1992 until 1999, Badreddine was the military commander of Hezbollah leading the resistance against the Israeli occupation of southern Lebanon. Then Badreddine assumed another role and the command was taken by Mughniyeh, who was married to Badreddine’s sister. While Badreddine had mainly focused on reducing the number of deaths among members by enhancing the use of booby traps, Mughniyeh came from a newer school of thought that blended classic military with guerrilla war. By May 2000, Israel was forced to withdraw from Lebanon unilaterally.

From 2000 until 2008, Badreddine’s role was to lead the group’s security apparatus, which helped later in uncovering several Israeli spy networks in Lebanon. A source close to the party indicated that Badreddine played a vital role in the 2006 war with Israel, though the source provided no details.

The special tribunal for Lebanon that is looking into the assassination of former Lebanese Prime Minister Rafik Hariri believes Badreddine and three others were responsible for Hariri’s Feb. 14, 2005, death, an accusation that Hezbollah repeatedly denied while refusing to hand over the four suspects. According to the court, Badreddine used several names during this operation, among them Sami Issa, Elias Fouad Saab and Safi Badr. The court’s accusation of Badreddine and Hezbollah’s denial added to the already-tense atmosphere that had pervaded Lebanon since 2005, though after the Syrian crisis the case dropped down on Lebanon’s priority list.

In 2008, Mughniyeh was assassinated in a Damascus car bombing. Badreddine was chosen among other commanders to fill the shoes of Mughniyeh, whose death Hezbollah blamed on Israel. All those who were chosen became members of the jihadi council and aides to Secretary-General Hassan Nasrallah. In 2011, the Syrian crisis began at the same time the tribunal indicted Badreddine. A year later Hezbollah started preparing for its intervention in Syria. May 2013 marked Hezbollah’s first battle in Qusair. Badreddine started overseeing the group’s war in Syria and how it developed from an operation to protect the borders to a battle for the preservation of the Shiite shrines. He remained in that capacity until the day he was killed.

To Hezbollah, Badreddine isn’t someone who can be replaced the next day, given his history, understanding and influence inside the organization. Yet, the number of commanders slain during the Syrian war has given the group the experience to endure such hits with the fewest possible effects. In fact, one day, years ago, Mughniyeh and Badreddine were seen as Nasrallah’s main lieutenants. Now that he has lost both, Nasrallah will begin looking within his ranks for the man who’ll replace his Syria war commander. He might have many candidates, but none of them can fill the shoes of Mustafa Badreddine.