In an interview with Al-Monitor, Hamdeen Sabahi, a former presidential candidate and head of the Egyptian Popular Current, speaks about his decision to stage a sit-in and his views on the political situation in the country. 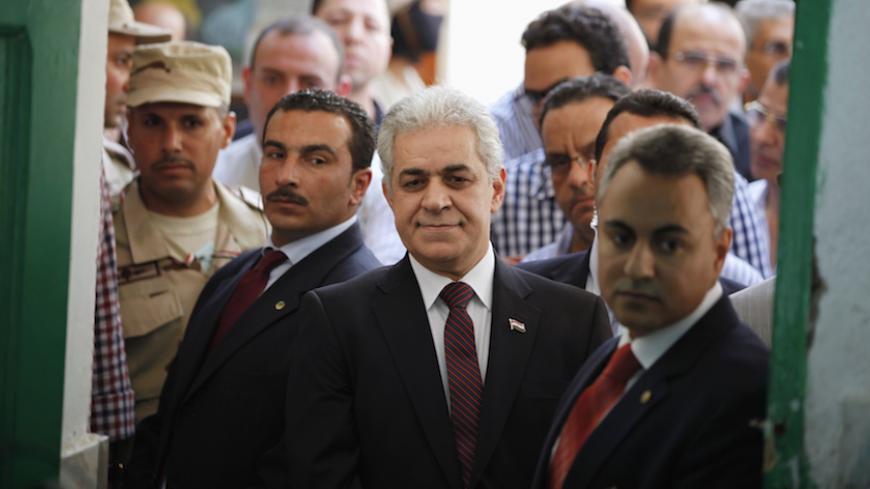 Presidential candidate Hamdeen Sabahi (C) waits to cast his vote during the presidential election in Cairo, May 26, 2014. - REUTERS/Asmaa Waguih

On May 17, former presidential candidate Hamdeen Sabahi decided to stage a sit-in at the Karama Party headquarters in Cairo against the border demarcation agreement between Egypt and Saudi Arabia, under which Egypt transferred ownership of the Red Sea islands of Tiran and Sanafir to Saudi Arabia. The sit-in was also held to protest against the decision to imprison 101 demonstrators for five years and 51 other demonstrators for two years for participating in the April 25 demonstrations against the transfer decision.

On May 24, the Court of Appeal revoked the decision to imprison the 101 demonstrators and imposed a fine on them instead. The rest of the protesters have yet to be released.

In an interview with Al-Monitor, Sabahi tackled Sisi’s performance during his two-year reign as well as the real alternative initiative, which he believes is the only way to achieve the January 25 Revolution goals.

Al-Monitor:  What motivated you to stage a sit-in at the Karama Party headquarters?

Sabahi:  The maximum sentences issued against more than 150 young Egyptians was based on an unconstitutional law and unjust trials. The authorities are seeking to punish people who wanted to express their opinion in a peaceful way. This is part of a set of measures aimed at tightening the noose on the right to peaceful expression. Instead of resorting to dialogue, the authorities used the security forces as a major tool to deal with those voicing a different opinion. Tyranny is the name of the game. The president is being deified and the people are being forced to surrender.

Al-Monitor:  How does the ceding of the two islands pose a threat to Egypt's national security?

Sabahi:  Land ceding constitutes the biggest threat to our national security. The state lost sovereignty over part of its territory, and the constitution has been violated. Its first article determines the state's territory and ensures its unity, while Article 155 prohibits ceding [land], even if the people give their consent. In this case, the people were not even informed of the state’s intention to take this dangerous step.

This is a great example of the tyrannous state, which took a decision it is not authorized to take. Strategically speaking, the Strait of Tiran is the main navigable waterway that leads to the Israeli port of Eilat, and the ceding made Egypt share sovereignty over it with another country. Despite the international nature of this strait after Camp David, the transfer of the islands’ ownership to Saudi Arabia prevents Egypt from imposing its full sovereignty over the strait. I link this to the Israeli seas canal project aimed at establishing a link between the Mediterranean Sea and the Red Sea through the Dead Sea. This channel will serve as an alternative to the Suez Canal and will turn the latter into a swimming pool. The ceding has crippled Egypt’s grip on this project and made the Suez Canal lose its importance.

Al-Monitor:  To what extent is your sit-in able to dissuade the state from its decision regarding the border demarcation agreement?

Sabahi:  The protests are actually aimed at making a difference in the case of prisoners of conscience, but the land issue will require considerable effort. We are protesting at a time when the authorities are mobilizing their media outlets and audience despite the negative impact that such mobilization would have on Egypt’s interests.

Al-Monitor:  What is your take on the popular movement witnessed in Egypt following the agreement?

Sabahi:  Egyptians have an inherent potential capable of exploding when necessary. This has been exemplified by the demonstrations that included thousands of people, knowing that many young Egyptians had withdrawn from such movements out of frustration. This is a sign that the popular movement in Egypt is alive and cannot be extinguished.

Al-Monitor:  What is your take on the authorities’ dealing with this movement?

Sabahi:  The authorities’ dealing with the movement is weak. The leadership has abused its security apparatus, which reflects the fragility of its position and its persuasion inability. Why would it resort to violence if it is confident of its ability to convince the masses? Egypt has become a strong state with a weak administration that resorts to excessive force whenever it feels that it is in a weak position.

Al-Monitor:  Why do you believe the demonstration law needs to be reconsidered?

Sabahi:  This law should have been reconsidered ever since it was released. It should be a law that guarantees, not obstructs, the constitutional right [to demonstrate]. It is an unjust and brutal law, and it is being used by the authorities to maltreat dissidents. The absence of a way for people to peacefully express their opinion sets the stage for terrorism. Not only do we need to amend the demonstration law, but we also need to have all prisoners of conscience released. The people should be allowed to express their opinion.

Al-Monitor:  What is your take on Sisi’s dealing with the topics of freedoms, the economy, foreign policy and social justice?

Sabahi:  Social justice is the most important of all. The poor have become poorer, and the policies governing the economy and wealth management and distribution are the same as before January 25, 2011.

As far as freedoms are concerned, the authorities’ philosophy has not changed. These are still demeaning the role of the masses. The only difference is that there are now more victims. Also, in terms of national independence and Egypt’s role, Egypt is losing its leading role in the region.

Economically speaking, with all due respect to the efforts made in several projects — some of which succeeded, while others failed — the society and its institutions did not participate in the decision-making process, and the order of priorities faded. There was no fixed plan to determine our needs, our funding sources and the available opportunities aimed at figuring out the optimal spending methods, the projects’ social impact and role in creating jobs so that the poor classes can benefit the most from the proceeds of the projects as a step on the path toward achieving social justice. We are dealing with the same old policies that will eventually lead to the same results, but those who are now in charge of the implementation of policies do not even have the managerial skills to run bad policies.

Al-Monitor:  What is your take on [President Abdel Fattah al-] Sisi's recent comments on warm peace with Israel?

Sabahi:  We are in the process of launching a project to widen the scope of Camp David. I expect new peace initiatives that would work to achieve Israel's interests in the first place, but the transfer of islands was certainly part of this warm peace and Israel was a party to the agreement. I see this as a step to draw a new regional map in a way that redistributes the effective players therein. This was disclosed by Foreign Minister Sameh Shoukry and reiterated by Sisi, who said that Egypt is not striving for leadership. The current authorities are defying geographical and historical facts, and they are working to make Egypt move from leadership to dependency, in favor of whom? If they want to serve Saudi Arabia, then this confirms the idea of ​​turning the conflict in the region from an Arab-Israeli conflict into a Sunni-Shiite conflict, and this is exactly what would serve the interests of Israel. However, if they are working to serve Israel's interests, then the outcome would be worse.

Sabahi:  The initiative was born because we know full well that despite the existing hostility between the [former President Hosni] Mubarak regime and the Muslim Brotherhood, these are two sides of the same coin. They adopted the same policies and the same choices that led to the same consequences of poverty, corruption, tyranny and subordination. The two have agreed not to allow the people to show an alternative to them. The problem faced by the revolution was the absence of organization, and the gap must be filled through organization and alternative policies. We are seeking to build a strong party that includes the Karama Party, the Egyptian Popular Current and several independent currents to support the democratic movement in the street, and we will go into the upcoming local elections to measure our ability to build a discourse capable of earning the trust of the masses.

Al-Monitor:  What is your assessment of the performance of the current parliament?

Sabahi:  It is very weak. And this is expected given that security and political money have played an illogical role that went beyond what is permitted within [the parliament]. Yet still I appreciate the attempts made by some good parliamentarians, but the parliament’s decision is not confined to those alone. The authorities have made this parliament, and its performance goes in line with the performance of the authorities.

Al-Monitor:  What do you think of the current administration’s management of the country’s affairs?

Sabahi:  I think the authorities are abusing violence instead of using their political mind. The authorities should solve problems politically, not through their security apparatus, so that the policies that led the people to revolt get changed.

Al-Monitor:  To what extent are the Egyptian media outlets biased toward the authorities?

Sabahi:  The Egyptian media is largely biased to the ruling authorities as a result of the imposed restrictions and the pressures placed on them. Add to this the influence of the capital that owns most of the independent national media outlets. The crisis is not only about bias, but about the aggravation of the hate and polarization discourse. Instead of finding consensus among the people, the media outlets are deepening the division.

Al-Monitor:  Why do you think the Egyptians are less ambitious now when it comes to achieving the goals of the January 25 Revolution?

Sabahi:  The revolution has ups and downs. The aspirations of the people after January 25 were legitimate and deeply rooted. What changed is the people’s ability to reach these goals because the revolution lacks organization, and it was stolen twice. I think Egyptians still have the same dreams following the January 25 Revolution, but their ability to achieve these dreams requires more effort.

Al-Monitor:  Do you think Sisi [supports] the January 25 Revolution goals?

Sabahi:  Sisi is not aligned with the January 25 Revolution goals, and he must change his security and economic policies and involve the community in all of his decisions.

Sabahi:  The Egyptian Popular Current’s presence has diminished, as is the case with the rest of the political forces. We are working on forming a strong partisan entity to establish an organized civilian front that can serve as a substitute for the two sides of the coin, namely the old regime and the Muslim Brotherhood.

Al-Monitor:  What are you working on currently? Do you intend to run in the next presidential election?

Sabahi:  In addition to working on the alternative initiative, I am working with all the parties on achieving the January 25 goals, like any Egyptian who participated in the revolution and witnessed the sacrifices that were made in this regard, and I have a great insistence on this. As for the next presidential election, I will not be participating.