Is Egypt's state of emergency in Sinai unconstitutional?

Egyptian President Abdel Fattah al-Sisi is drawing the wrath of advocates of the constitution once again, this time for extending the state of emergency in north Sinai for another three months. 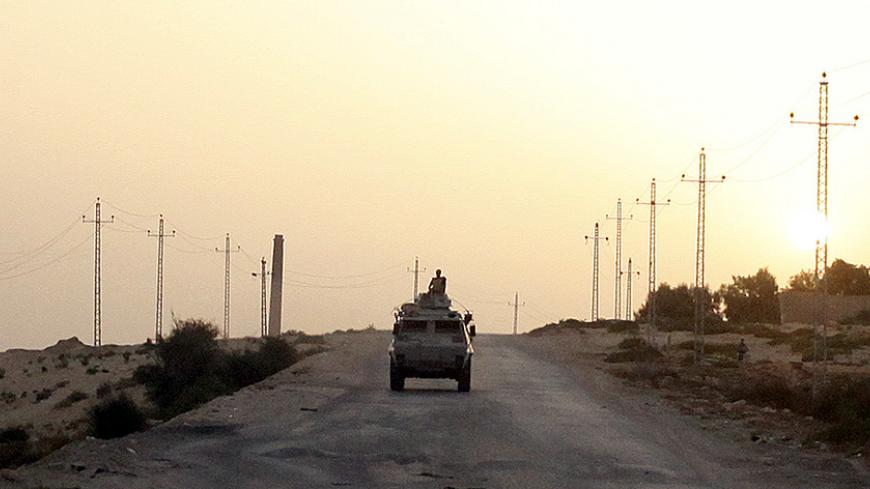 An Egyptian military vehicle is seen on a highway in northern Sinai, May 25, 2015. - REUTERS/Asmaa Waguih

Critics are blasting Egypt's latest extension of a state of emergency in the north Sinai Peninsula, saying it violates the constitution and parliament's powers. The original three-month order was issued in October 2014 and has been extended many times, amid much indignation and repudiation by Sinai residents, whose businesses are affected by the restrictions on movement and the curfew.

The Egyptian government said mounting violence perpetrated by terrorist groups against military and police targets forced President Abdel Fattah al-Sisi to extend the state of emergency yet again to preserve security, tighten the grip on these groups and counter their continuing attacks. The government said that the army and police, in turn, are taking measures to face terrorists, prosecute their money suppliers and safeguard innocent lives as well as public and private property.

Article 154 of the Egyptian Constitution says a majority of parliament must approve a declaration of a state of emergency before it is implemented for three months. To extend that order for another three months requires approval by two-thirds of the legislature. Neither requirement was a problem with the previous declarations because, until this year, the country had been without a parliament since 2012.

Parliament member Alaa Abdel-Moneim aimed harsh criticism at the Cabinet during parliament's May 8 general session. Abdel-Moneim urged the government to respect the constitution, which says the president must submit such a decree to parliament within seven days. He said, "Prime Minister Sharif Ismail should have delivered his statement before the parliament prior to the current general session. What is happening is a blatant violation of the constitution."

In an attempt to settle the issue, Speaker Ali Abdul Aal revealed during the same session that he had previously been notified about the president's decision to declare a state of emergency and that the prime minister was slated to address the parliament on May 10 regarding that decision.

In a bid to justify the situation, Ismail delivered a statement May 10 outlining why the president had declared a state of emergency, but Ismail didn't address why the Cabinet delayed its submission to the parliament.

"The state's keenness on preserving national security and determination to cleanse precious Sinai from terrorism and extremist ideology, as well as Sinai's need for comprehensive development, made it a necessity for the president to declare a state of emergency in all parts of north Sinai," he said.

"Terrorist groups are still targeting north Sinai, wreaking havoc there by smuggling arms, spreading extremism and killing army personnel, police forces and civilians. External and internal forces are also supplying terrorist groups with money, arms, ammunition, individuals, and political and media [support] with the objective of turning the entire Sinai Peninsula into a lawless area and a springboard for spreading terrorism in the entire region. As a result, we … decided to declare a state of emergency," Ismail added.

In an interview with Al-Monitor, constitutional expert Shawki al-Sayed said the subject is more complicated than it appears.

"The declaration of a state of emergency violated Article 154 of the constitution. But what most people don't know is that President Sisi referred to Emergency Law No. 162 of 1958. All Egyptian presidents have referred to this law, which grants the president absolute power to impose a state of emergency whenever he deems necessary and without addressing the parliament. … However, this does not justify the constitutional violation committed by President Sisi in this respect," he said.

Article 3 of Emergency Law No. 162 of 1958 authorizes the president alone to declare a state of emergency in the event of a threat to security or public order, whether due to a war or the threat of war, or due to a public disaster or epidemic.