The initiative by Culture and Sports Minister Miri Regev requiring every institution financed by the state to fly the Israeli flag is just yet another ploy to make headlines and associate herself with nationalist interests. 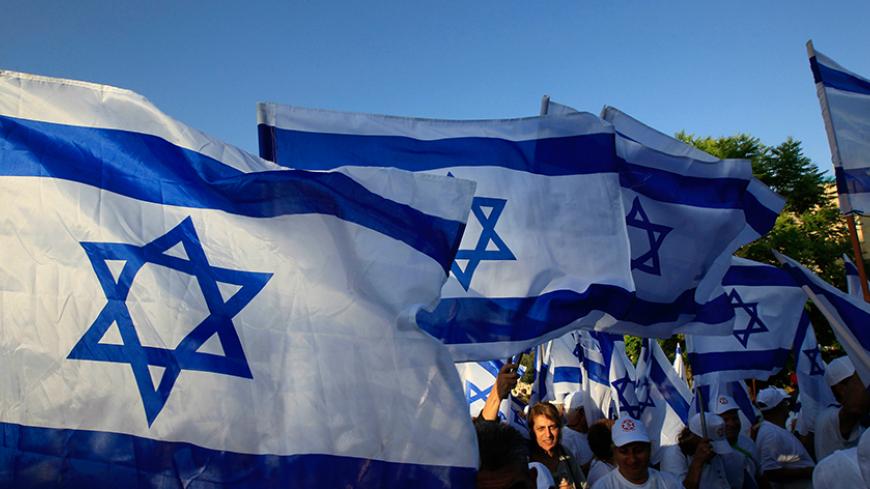 Israelis wave national flags ahead of Jerusalem Day in Jerusalem, May 30, 2011. - REUTERS/Ronen Zvulun

It should have come as no surprise when Minister of Culture and Sport Miri Regev used the eve of Independence Day, May 9, to announce a provocative new piece of legislation that she intends to champion. She wants to compel institutions and facilities built with state funding to fly the Israeli flag.

Regev’s flag law is the latest link in a series of controversial legislative initiatives, ordinances and statements by her that have offended various sectors of the population. They are also the kind of initiatives that she can ride all the way to the Likud primaries. Take, for example, the Mizrahi agenda that she is trying to advance in Israeli culture. The problem is that she is using an attitude of disdain toward everyone else to win the hearts of the masses. Regev is never satisfied with speaking out sharply about Ashkenazi cultural hegemony over Israel. She always insists on being defiant, expressing herself in ways that she knows will make headlines and turn her into a “working class hero.” For example, she used the term “tightasses” to describe Ashkenazi artists from Tel Aviv.

Alongside her war against the Ashkenazim, which is winning her more and more support among the Likud’s Mizrahi electorate, Regev also wants to use strong-arm tactics with Israel’s Arab sector such as passing laws and regulations requiring them to be loyal to the state. All of this is, of course, intended to promote her image as a minister eager to settle the score with the Arabs and restore order.

The "cultural loyalty" law, which she initiated upon entering office, was intended to deny government funding from cultural institutions that criticize the state and its symbols. As expected, the proposed law raised a commotion, enraging leftist and Arab Knesset members and artists and prompting them to protest, which was exactly what she wanted. Every disparagement and curse, every criticism and insult hurled her way is pure poetry for her, proving to her right-wing electorate that she is not afraid of her opponents. She is a proud and unapologetic patriot, the ultimate Zionist.

Now, a few months later, Regev’s law remains little more than a statement of intent, but what difference does that make? She already cashed in. Today she is enjoying what she likes most of all: loud headlines that depict her as the little Dutch boy who used the few resources available to prevent the state from falling to the dark forces of the left and the Arab-Israeli sector.

Few of Regev’s initiatives have any real backing, but they do manage to poison Israel’s civic space and intentionally add fuel to the already volatile atmosphere between Arabs and Jews. As far as Regev is concerned, the more uneasy the situation, the better. Volatility and conflict mean more votes for her in the Likud primaries. Regev succeeded in cracking the code, and her skirmishes against Arabs and Ashkenazim will allow her to continue to soar in the Likud.

Regev, therefore, could not let this Independence Day pass without leaving her mark on it and exploiting the festive holiday mood to advance yet another nationalist initiative.

Regev announced that she instructed the director general of her ministry, Yossi Sharabi, to assess and formulate a proposal to require all cultural and sports facilities in Israel built with state funding to fly the Israeli flag. Regev’s vision is one of the Israeli flag being flown over football fields, sports stadiums, theaters and cultural centers built with state funding, whether directly by government ministries or through the various state lotteries. Regev has been quoted as saying, "Israel's 68th Independence Day and Memorial Day require us to uphold the country's values and symbols. It's not reasonable that displaying a flag on cultural centers and sports facilities that were built by the government should be left to the discretion of individuals. Institutions built by Israel should fly the flag with pride."

This seems like a positive initiative. But what Regev really wants to do is to pour fuel on the fire in the conflict between Arabs and Jews. Right now, the Israeli flag flies over all public institutions, including state and municipal institutions in the Arab sector, and no one has a problem with that. But Regev is focused specifically on the soccer stadium, an already volatile place. She knows that there, her proposal could cause riots, but unrest is her lifeblood as a politician.

In press interviews, Sakhnin Mayor Mazen Ghnaim explained the problem well: “I am very proud of my identity, but on the other hand, I am a citizen of the State of Israel. The Israeli flag flies over every institution, over the municipal building, over all the local councils. … Is there anyone today who is refusing to fly the Israeli flag over any government institution?”

It is likely that this particular initiative, like most of Regev’s other initiatives, will remain little more than a headline. Unfortunately, however, it will continue to hover over us like a dark shadow for a long time to come. No matter what anyone thinks about Regev and the flag, all the minister really wants is to use this initiative to advance her personal political needs. This manipulation cheapens the flag's value, alienates entire sectors of the population and hurts everything that the flag is supposed to represent.