For some fleeing conflict, even Yemen is a haven

Thousands of Africans fleeing the misery in their countries continue to seek refuge in Yemen, which itself is suffering the ravages of civil war. 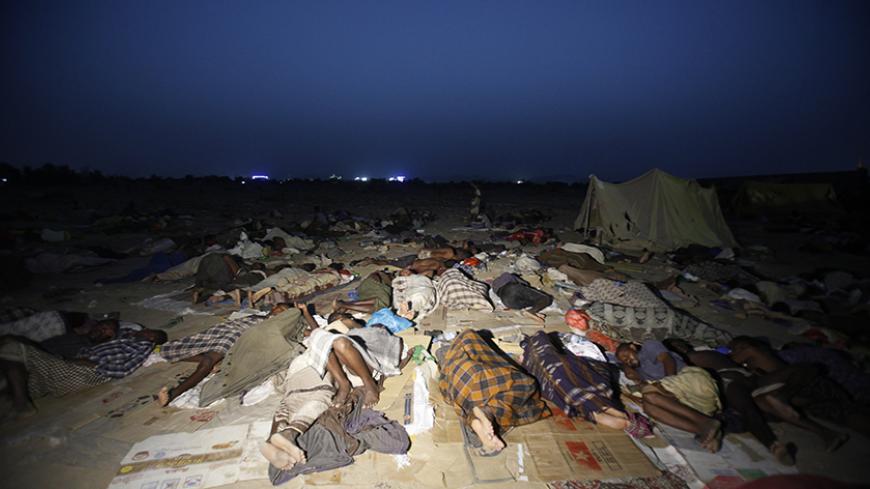 Ethiopian migrants sleep out in the open near a transit center in the western Yemeni town of Haradh, on the border with Saudi Arabia, May 21, 2013. - REUTERS/Khaled Abdullah

SANAA, Yemen — One of the most striking paradoxes generated by war and migration in the Middle East is that the war in Yemen, raging since the spring of 2015, has not scared off boats packed with African immigrants heading toward this impoverished country.

Africans fleeing the despair and hell of conflicts on the other side of the Red Sea, in Somalia, Djibouti and Eritrea, still flock to Yemen, which is also plagued by misery and a bloody armed conflict.

The United Nations High Commissioner for Refugees (UNHCR) reported Jan. 19 that around 92,000 people reached Yemen’s shores by boat in 2015. It said the number is one of the highest annual totals recorded over the past decade, and two-thirds of these immigrants reached Yemen since March 2015, when the conflict began.

Yemen is the only country on the Arabian Peninsula that is a state party to the 1951 UN Refugee Convention and its 1967 Protocol. The convention, signed by 139 countries, is designed to protect refugees, provide them with aid and reinstate their social rights.

Yemeni President Abed Rabbo Mansour Hadi said in 2013 that there were close to 2 million foreign refugees living in Yemen. Back then, Yemen was hosting hundreds of Syrian refugees fleeing the war ravaging their country, but the number Hadi mentioned seemed exaggerated and inaccurate.

Yemen is a miserable and doomed "escape" for those who fled conflicts and suffering in their homeland to save their lives. When immigrants, mostly from Somalia, reach the west coast of Yemen, they are hosted in the Kharaz refugee camp, which is about 1,500 square meters (roughly one-third acre) in size and about 136 kilometers (84 miles) from Aden. The camp was established in 2000 in a secluded and harsh place where temperatures in the summer can reach 50 degrees Celsius (122 degrees Fahrenheit).

The UNHCR receives the refugees, records their data and gives them identity cards to protect them from being forcibly deported to their country of origin. Yet many refugees overlook this protocol and head toward Aden or Sanaa with no identity papers, making yet another harsh and expensive trip.

Said Wael Mohamed Hassan, a human rights activist, lives in Lahij, the province where the Kharaz camp is located. He told Al-Monitor, “The camp consists of 83 residential units of 25 houses, each including a family or two.”

Most of the refugees in Kharaz are Somalis; the camp hosts nearly 17,000 refugees from that country, which has been plagued by a civil war for almost two decades.

In her book titled "A Million Shillings, Escape from Somalia,” journalist Alixandra Fazzina noted the Kharaz camp once was a military base. She described the camp's environment as hostile and unforgiving, and a far cry from the promised land many refugees risked their lives hoping to find.

One of the hundreds of Somali refugees living in the Safia district in central Sanaa told Al-Monitor on condition of anonymity, “At the end of 2015, I went on a precarious journey to cross the sea to reach Yemen. I almost died three times at sea, when the boat, carrying about 40 people, was about to overturn. I said to myself: God, I do not want to die at sea. I prayed for this not to be the end.”

The UNHCR writes on its website, "Tragically, more people continue to lose their lives trying to cross the sea in overcrowded, unseaworthy boats.”

The Somali man said, “I thought that once in Yemen I would have a fresh start, but I was mistaken. I have a miserable life, I did not find a job and I failed to [make it] into Saudi Arabia because of the war."

“But at least I'm still alive,” he added.

Many Africans view Yemen as a gateway to other parts of the Middle East, as it shares a border with Saudi Arabia, which hosts millions of foreign workers. Immigrants with high hopes are shocked when they reach Yemen and witness the ruin inflicted by its devastating civil war.

Despite the refugees' dire conditions, there are no Somali beggars in Sanaa, unlike the many poor Yemenis seen in the capital’s streets. Somali refugees forge a living out of their perseverance. Most of the men wash cars for a maximum of $2 in popular markets, while women work in the homes and offices of affluent families. The women serve drinks and clean offices for $200 a month in the best-case scenarios.

Somali refugee Othman Omar told Al-Monitor he has spent 20 of his 29 years in Sanaa. "I have not received any financial aid or in-kind allowance from any international organization. I have been washing cars to provide for my family.”

Another refugee told Al-Monitor on condition of anonymity, “I received $300 a month from the UNHCR, but the amount was cut to $150.”

A third refugee said, “I only get $100, which is not enough in light of the high food prices.”

These refugees were sitting in the shade on the sidewalk in Sanaa, with old pieces of cloth on their shoulders and buckets of soapy water, waiting for a driver to give them the sign to wash his car.

In addition to the harsh living conditions, the refugees are at high risk. Omar told Al-Monitor, “The Houthi militants, who control Sanaa, are forcing us to fight in their ranks, against their opponents.”

He added, “They took 30 Somalis to fight in their ranks. I even know some of them. Why have we fled our country to Yemen? Had I wanted to fight, I would have stayed in Somalia. We have fled death. Now, we fear that they will force us to join the Yemeni war.”

The number of immigrants in Sanaa, Aden and Lahij is unknown. Al-Monitor was unable to secure any figures from the UNHCR offices in Sanaa and Aden.

It seems refugees from war-torn nations throughout the region are unwittingly exchanging one wretched existence for another. In the struggle to survive, more than 173,000 Yemenis have fled to neighboring countries since March 2015 to escape the war, including 51,000 to Oman, 40,000 to Saudi Arabia, 33,000 to Djibouti, 32,000 to Somalia, 11,000 to Ethiopia and 6,000 to Sudan.

Yemeni refugees in Somalia, Djibouti and Eritrea are living miserable lives. They rely heavily on UNHCR aid in the absence of the Yemeni government, which was exiled to Riyadh.

In a May 18, 2015 story, the Los Angeles Times described Yemeni refugees as surviving "in a rudimentary camp in Djibouti on a remote coastal stretch where shelter from a punishing sun is scarce and the shrieks of hyenas and jackals echo in the evenings.”