Syrian refugees boost Turkish economy, but for how long?

Syrian refugees provided a much-needed boost to the slowing Turkish economy last year, but their contribution is not expected to last. 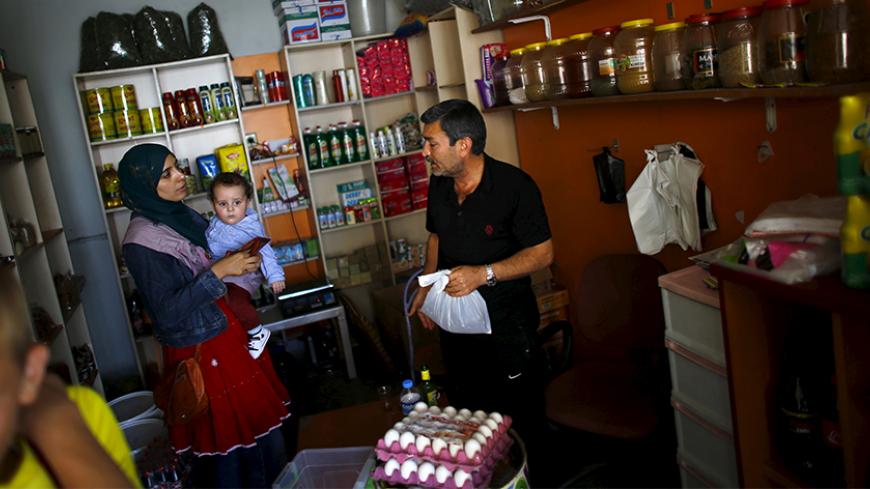 A Syrian woman who fled the war in her homeland shops at a market in a low-income neighborhood of Ankara, Turkey, Sept. 29, 2015. - REUTERS/Umit Bektas

The Turkish economy grew an average of 3% in the past four years, a rate that trails behind the country’s 50-year average of 4.5%. The slowdown is the result of both the weakening global economy and adverse political and economic conditions at home. Yet a much-needed booster has come from an unlikely quarter — the Syrian refugees.

Close to 3 million people have fled to Turkey since the outbreak of the Syrian civil war in 2011, and their impact on the economy is becoming more pronounced. Beating expectations, Turkey’s economy grew 5.7% in the last quarter of 2015, the highest rate in the G-20 group after China and India. The overall growth rate for 2015 was 4%, again a surprise compared to the previous year, with household consumption contributing 3 percentage points to headline growth. Economists believe Syrian refugees played an important part in boosting consumption spending as it became the driving force of the economy.

In a recent report on the issue, Morgan Stanley economist Ercan Erguzel wrote, “In what appears to be a break with the past, the driver of strong consumption was not consumer loans. … [The] strong correlation between lending and consumption growth has started to diminish since 2013. This trend is also not easily explained by the increase in gross wages and salaries, given that the growth rate in income in real terms in the last two years has not changed significantly. We believe that at least some part of this strong domestic consumption can be explained by the huge refugee influx in the last two years, reaching almost 3 million Syrians currently meeting their basic needs from Turkey. This can also be confirmed from agricultural sector growth, which, at 7.6%Y (4Q trailing), was the strongest rate since 2005.”

The refugee influx in 2015 was the biggest since the Syrian crisis began. According to UNHCR figures, nearly 1 million people took refuge in Turkey, with the total now exceeding 2.7 million.

Though experts agree widely on the refugees’ positive impact on growth, the precise extent of this impact is hard to calculate. Muammer Komurcuoglu, an economist at Is Investment, believes the “refugee impact” could be measured using Turkey’s hunger and poverty lines, which stood at 1,400 Turkish lira ($492) and 4,651 Turkish lira ($1,634), respectively, for a four-person family in March. “I believe Syrians made an important contribution to growth. One could calculate it using certain assumptions,” he told Al-Monitor. “If we assume that the Syrians live at the hunger line, we are able to calculate their total expenditures as 0.5% of gross domestic product. And if we assume they live on the poverty line, then the figure goes up to 1.7%.”

The refugee impact on other economic indicators, however, is negative. Take for instance the unemployment rate. According to official statistics, unemployment rose to 10.3% last year from 9.9% in 2014. Surveys indicate that the Syrian refugees — most of whom work illegally — drove the increase. A November study by the Confederation of Turkish Employers’ Unions says at least 300,000 Syrians have entered the Turkish labor market. Based on this figure, Komurcuoglu calculates that Syrians added 1 percentage point to the jobless rate.

In a March review e-mailed to Al-Monitor, Tim Ash, a senior economist at Nomura International, wrote that the Syrians had a positive impact on Turkish growth and argued that lifting restrictions on their work permits would lead to a decrease in labor costs and thus a lower inflation.

Yet official figures show that inflation in regions with big refugee populations is higher than the national average. Observers believe this is due to an increased demand for consumption goods, housing and transportation. According to the Turkish Statistics Institute, Turkey’s inflation was 7.46% in March, down from 9.58% in the beginning of the year. The rate, however, stood 1 percentage point higher — at 8.48% — in Gaziantep and neighboring provinces at the Syrian border, which are home to sizable refugee communities.

The Syrians’ positive contribution to growth is not likely to be a lasting one, while their negative impact on unemployment is expected to continue. When it comes to their impact on inflation, the issue remains open to debate for now.

“Turkey has seen a big demographic shift, and its economic impacts are now becoming more visible,” economist Murat Ucer told Al-Monitor. “The Syrians’ impact on growth was a one-off thing, meaning they will not be boosting growth at the same rate every year. But as long as they stay, they will continue to push up unemployment and pressure wages.”

Erguzel also believes the refugees’ contribution to growth will wane in the coming period. “Barring a new migration wave in the long run, the Syrians’ impact on growth will not be a durable one. It will even reverse if returns begin,” he told Al-Monitor, estimating that Turkey’s economic growth would decline to 3% this year.