Erdogan, Davutoglu shed tears for Gaza, but do little else

Turkey as well as the oil-rich Gulf states have still not fulfilled their pledges to help with the reconstruction and development of Gaza. 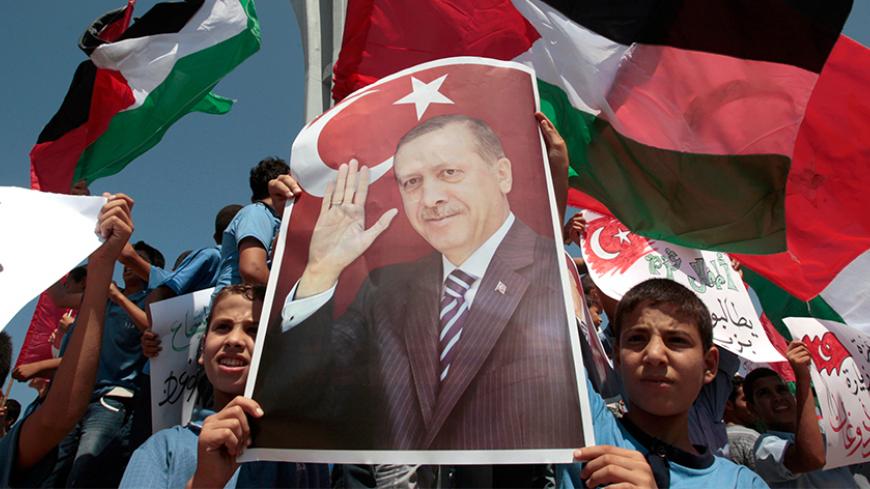 The closing session of the recent 13th summit of the Organization for Islamic Cooperation (OIC), held in Istanbul, experienced a diplomatic scandal, set in motion by the host's economic finger-pointing. The proverbial shoe would soon, however, be on the other foot.

Turkish President Recep Tayyip Erdogan, chairing the summit April 15, referred to the widely discussed financial problems of the OIC as the cause of the organization's passivity and ineffectiveness. He went on to declare that Turkey would be donating $2 million to help make the OIC the influential organization suggestive of its name. Erdogan then began to read the names of member states that had not paid their dues. But Saudi Arabian Finance Minister Ibrahim Abdulaziz al-Assaf stated that “Such issues are solved inside the organization. It is not proper to expose the countries that have not paid their dues.”

By coincidence, just as Erdogan revealed delinquent OIC member states, the World Bank in a report April 19 exposed Turkey to the world as one of the countries that had not fulfilled their pledges to help with the reconstruction and development of Gaza after Israel’s intense bombardment in July 2014. Erdogan and his Justice and Development Party (AKP) government, which frequently invoke the Palestine issue and the plight of Gaza for domestic political advantage, were embarrassed by the disclosure.

Since 2013, Erdogan has been expressing his intention to visit Gaza, but he has been unable to do so because of tensions in Israeli-Turkish relations. Karel Valansi, foreign affairs writer for Istanbul’s Hebrew-language newspaper Shalom, noted that Erdogan could only go to Gaza "only with the knowledge and approval of Israel, but that was not likely to happen any time soon." Valansi also pointed out that Erdogan couldn’t go to Gaza via Egypt because of problems between Ankara and Cairo and therefore would have to travel via Israel. Of course, it would be up to the Israeli government to approve any such journey.

A donor conference for Gaza's reconstruction had been held in October 2014 in Cairo. Some 50 countries agreed to set up a fund to repair Gaza’s infrastructure and rebuild destroyed houses, schools and other buildings. Turkey pledged $200 million to the fund, which recorded $3.5 billion in promises.

The World Bank regularly releases figures on the ratio of pledges paid, and its report dated April 19, 2016, covering the period ending March 31, noted that only 40% of the $3.5 billion has been delivered. Turkey has paid $64 million, or 32% of its $200 million pledge, while Saudi Arabia, which pledged $500 million, has so far disbursed only $51 million.

Qatar made the biggest pledge, at $1 billion, but has only paid $152 million thus far. The United Arab Emirates pledged $200 million and has provided $29 million. Kuwait, which promised $200 million, is yet to make good on a single dollar of its pledge. Meanwhile, the United States, Netherlands, Canada, Denmark, Finland, Austria, Australia, Russia, India, France and Algeria have paid their pledges in full, and Sweden has provided more than it pledged.

The World Bank report reveals that the majority of the countries that have not delivered on their pledge are, strangely enough, Muslim countries, including, as cited, the oil-rich Gulf states. The bank has since called on these countries, including Turkey, to keep their promises. According to the report, only 9% of the destroyed houses have been rebuilt, and 75,000 Gaza residents remain homeless.

President Erdogan and Prime Minister Ahmet Davutoglu frequently refer in their election campaigns to the assistance Ankara provides to Gaza and other support to the Palestinians. People remember how Davutoglu, in response to main opposition leader Kemal Kilicdaroglu, who had called for improving relations with Israel, had said in 2015, “You don’t know about the Mavi Marmara flotilla, of the children massacred in Gaza. We can’t be friends with those [Israeli soldiers] who have entered Al-Aqsa Mosque with their boots on.”

There is also Foreign Minister Mevlut Cavusoglu, who in a TV interview on April 9 asserted, “Until today, we gave much assistance to Gaza and Palestine, totaling about $500 million. At the Cairo donors' conference, we pledged an additional $200 million. Looking at the projects we have on hand, we will go above that amount.”

Alas, the World Bank report has exposed that the foreign minister's remarks do not reflect the current reality. His words are not backed up by deeds.