Though Israel’s Gaza operation is a central theme in its presidential campaign, Turkey remains largely irrelevant in efforts to end the fighting. 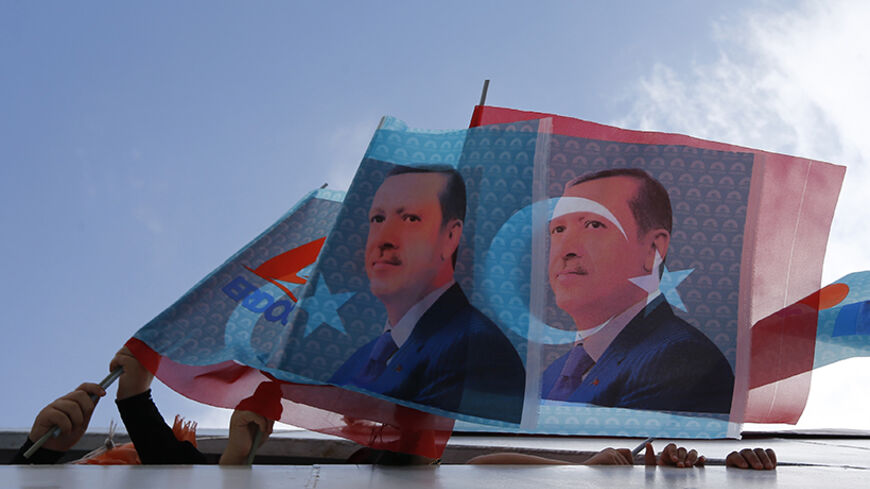 Supporters of Turkey's prime minister and presidential candidate Recep Tayyip Erdogan wave flags in a boat on their way to an election rally in Istanbul, Aug. 3, 2014. - REUTERS/Murad Sezer

Israel’s Gaza operation has become one of the central themes of Turkish Prime Minister Recep Tayyip Erdogan’s campaign for the presidency culminating in an election this Sunday, Aug. 10, the first ever by public vote. Despite strong international criticism, Erdogan has repeatedly compared Israel’s Gaza operation to Adolph Hitler’s barbarism and accuses his opponent, Ekmeleddin Ihsanoglu, of looking the other way on Israeli aggression.

“They are killing women so they cannot give birth; they are killing babies so they don’t grow up,” Erdogan said Aug. 3 at an election rally in Istanbul attended by nearly 2 million people accusing Israel of genocidal intent to create a pure race. “They are even afraid of babies, but believe me, the more they kill, the more scared they will be.”

On July 24, Erdogan attacked Ihsanoglu, saying, “Eeeey Ekmel, we know you well. You served for eight years [as the secretary-general of the Organization of Islamic Cooperation (OIC)]. … You never showed any guts [on behalf of the Palestinians], but Gazans know us well.” Foreign Minister Ahmet Davutoglu also slammed Ihsanoglu Aug. 2, accusing him of not knowing his place and subject. “Is there any other country than Turkey that is showing effort [to end Israel’s Gaza operation]?” Davutoglu asked. “Ekmeleddin Ihsanoglu is making remarks stating that one can’t take care of a people by just making verbal statements. We are taking care of them both by words and by actions. Yet one should ask him, then, what he did for them.” He added Aug. 3, “When Palestine earned the observer status at the UN, I was there, next to [Palestinian President] Mahmoud Abbas. Abbas still tells this everywhere he goes, that I was the only one with him on that day. So where were you as the secretary-general of the OIC, then?”

Expressing dismay over such remarks, Ihsanoglu has said repeatedly that this issue should not be exploited for political gains, as diplomacy requires prudence. “It is not enough to make statements or blame Israel,” he said July 20. “We can satisfy our people’s emotions, as well as those of other nations, but this is not the way to meet the needs of the Gazans or to end their suffering.” Denouncing the Israeli operation several times, Ihsanoglu stressed his long and well-established background as proof that he is no friend of Israel.

The deaths of Palestinian children and the painful pictures coming out of Gaza directly to people’s living rooms have indeed left Israel without any friends in the Turkish political sphere. There is certainly no public debate discussing Hamas' responsibility in this last round of fighting. Although the Pew Research Center survey in 2010 showed 9% of Turks in favor of Hamas — just a year after the previous Israeli operation into Gaza, that dropped to 5% in 2013. Turkish President Abdullah Gul, however, continues to blame Israel for any kind of Islamic extremism in the region.

Despite the lack of any significant public support, though, the Erdogan-Davutoglu team shapes the Turkish policy approaching Hamas as freedom fighters fighting honorably against the Israeli occupation. They have not yet made one statement about Hamas misconduct against Abbas or Gazans. “Hamas is not a terror organization, but an entity fighting to liberate its land from occupation,” Davutoglu said July 28 in Paris to one of his European counterparts in a meeting discussing a cease-fire. “They did not come there [to Gaza] from abroad. They are the grandsons of those living there for centuries.” His ministry has issued nine written statements since the beginning of this last round of fighting, but none with any direct mention of Hamas.

“We call on Israel to put an immediate end to its attacks carried on as a method of collective punishment against Gaza and also call on the international community, including the United Nations first and foremost, to expeditiously intervene and to warn against and urge for the cessation of these attacks,” read the first written statement on July 8.

The ministry released its latest written statement Aug. 4, condemning the Israeli strike on the UN school. “We strongly condemn the Israeli attack targeting a UN school which resulted in the death of at least 10 Palestinian civilians. We completely share the view of the UN secretary-general that the attack constitutes a criminal act,” the statement read. “Israel disregards all of the rules and established practices related to the international law and human rights with this and other previous attacks against UN buildings. [The] International community should take necessary steps to ensure that Israel is held accountable for its unprecedented attacks.”

While Davutoglu complains that his 110 telephone conversations to achieve a cease-fire yielded no results only because of Israel, Turkey’s relevance in the Arab world is also in question. Erdogan had rocked the Arab streets with his feverish remarks against Israel and gained unprecedented popularity during Israel’s previous Gaza operation — especially when he walked out of a January 2009 panel attended by then-Israeli President Shimon Peres in Davos at the World Economic Forum. Arabs loved Erdogan as they had never heard their leaders speak in such a way against Israel. They had also hailed Erdogan for bringing his country back to its Muslim roots. Erdogan had in fact blamed the previous Turkish governments for turning their backs against the Arab countries almost with a racist intent, and allying with Israel at the cost of the Palestinian cause.

Just as that framing was wrong, the Erdogan camp's efforts to bring anyone who questions Hamas’ responsibility in this round of fighting under the spotlight as if they were accomplices in the deaths of the Palestinian children is wrong. These excessive emotional explosions and misrepresentation of the facts do not help bring peace between Israel and Palestinians. While Davutoglu blames Ihsanoglu for not knowing his place, it would have been wiser indeed for Turkey to know its place and admit that it can only be a facilitator for improvement and can’t write the final chapter. Therefore, Ankara needs to understand the complicated nature of Arab politics and the Israeli-Palestinian conflict, and remain an observer weighing on this conflict with soft power. The previous Turkish governments’ approach was never coldness to Palestinian suffering, but a decision to keep a line open to Israel at all times. Yet if these governments were wrong, Turkey’s joining the region’s narrative against Israel also did not bring any benefit to the Palestinians or the Arab world at large, but only led to Turkey squandering its political capital in the region.