Does Erdogan want his own Islamic state?

Erdogan is willing to not abolish Turkey’s constitutional secularism, as some fear, but rather to use religion in the most effective way. 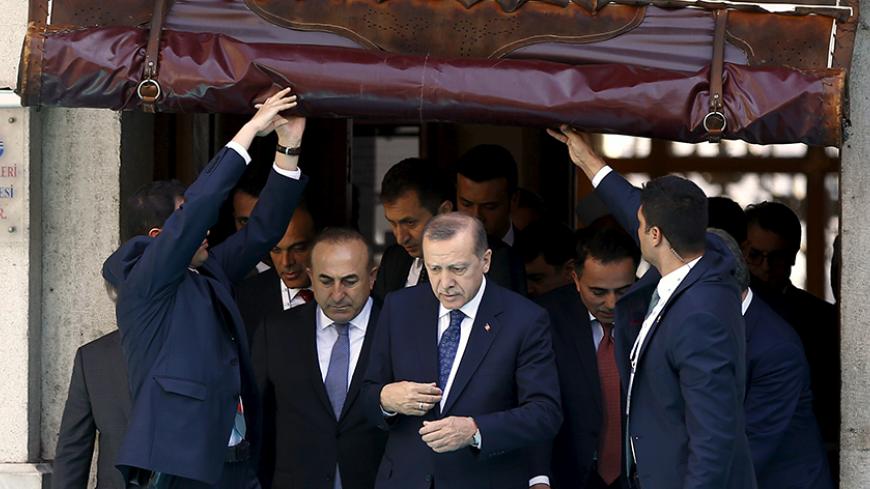 Parliament Speaker Ismail Kahraman unexpectedly sparked controversy in Turkey when on April 25 he declared that Turkey’s new constitution should forgo mention of “secularism” and instead be a “religious constitution” referencing God. His words reignited Turkey’s always tense “secularism debate,” which has been amplified since 2002 when the Justice and Development Party (AKP) came to power. Kahraman's remarks led to protests in a number of cities, a call by the main opposition leader for him to resign and allegations by secular pundits that the Speaker had shown the AKP’s “true face,” its “real intentions.” Because Kahraman is a known confidant of President Recep Tayyip Erdogan, many also suspected that his statement was part of a scheme being orchestrated by Turkey's leader.

In the next two days, however, the major figures in the AKP disowned Kahraman’s position on a “religious constitution.” The AKP’s Mustafa Sentop, chairman of parliament's constitutional commission, said that Kahraman’s view was not a “party stance” and that “secularism is preserved in our constitutional draft.” Prime Minister Ahmet Davutoglu asserted, “In the new constitution that we are preparing, the principle of secularism will be included.” He added that it would be a “liberal interpretation” of secularism, not an “authoritarian” version. In also addressing the controversy, Erdogan not only professed support for secularism, but even offered an inspired defense of the principle.

Defining secularism as the state's “obligation to stay at an equal distance to different faith groups,” he explained why it is a good idea: “If the faith of all religious groups in this country is guaranteed in the constitution, and the state’s equal distance to all religious groups is a foundation, why do you need to emphasize Islam? If I can live my faith as a Muslim the way I want to, the issue is over. If a Christian can live his/her Christianity, if a Jew can live his/her Jewishness or an atheist can live his/her atheism, the issue is also over for them.”

Will Erdogan's powerful statement ease the tensions over secularism? Probably not, because many secularists fear that they have not yet seen the AKP’s “true face.”

A common view in opposition circles is that Kahraman’s statement on doing away with secularism and introducing a religious constitution did not reflect his “personal views,” as he claimed, but was in fact part of a plan cooked up by Erdogan. Accordingly, Erdogan wanted to test the waters by having Kahraman float the idea of a religious constitution, but then defended secularism after the reaction it elicited. An “Islamic state,” however, remains Erdogan's long-term goal in their thinking. Another, more persuasive interpretation of events would be as follows.

Erdogan’s ambitions are more about power than doctrine. For power, he needs to sustain popular support, and for popular support, he needs to use religion, but only to a certain extent. While religious symbolism has broad appeal in Turkey, a Quran-thumping Islamic state does not. Various polls bear this out. The most recent survey of the political inclinations of Turkish society was conducted in 2013 by the Pew Research Center, which found that only 12% of all Turks support “making Sharia the official law in their country.” In contrast, 84% of Pakistanis and 74% of Egyptians supported the idea.

Erdogan likely has the support of this hardcore, Islamist minority of 12%, who probably do expect him to create their utopia. At the same time, he also has the support of a much larger block of “conservative” voters who are religious and like reference to religion, but who still prefer to live under secular law. This is why Erdogan would want to retain secularism in the Turkish constitution, albeit while not shying from venerating religion in the public square or perhaps even in the constitution.

A journalist with access to the AKP recently wrote in an insider report that there is a chance that the new constitution will preserve secularism — “laiklik,” from the French “laïcité” — but the preamble might make reference to “Allah and the religion of Islam,” along with some historical figures such as Rumi and Atatürk — in other words, something for everybody. Another rumor is that the preamble will make reference to “the Creator,” a possible inspiration from the US Declaration of Independence.

The more likely future for Turkey is not a Sharia-imposing Islamic state, but a more conservative state re-designed in the image of the AKP. Keep in mind that the latter-day ideology of the party is not simply “Islamism” after all, but “Erdoganism,” in which Islamism is indeed an important theme, but not the only theme. This would not put Turkey on the path to becoming another Iran or Saudi Arabia, as Turkey’s secularists fear, but it could lead in the direction of another Russia, where a similar ideology, “Putinism,” rules.

As the journalist Fareed Zakaria astutely observed, Putinism consists of five fundamentals: religion, nationalism, social conservatism, state capitalism and government media control. “Returning to the values of religion” — in particular Orthodox Christianity — is a powerful theme in Putin’s agenda, with a global vision of “protecting persecuted Christians all over the world.” Replace “Christian” with “Muslim,” and one has Turkey’s ruling ideology.