Rumors and denials of a possible coup by the Turkish military are a symptom of the malignant political atmosphere in the country. 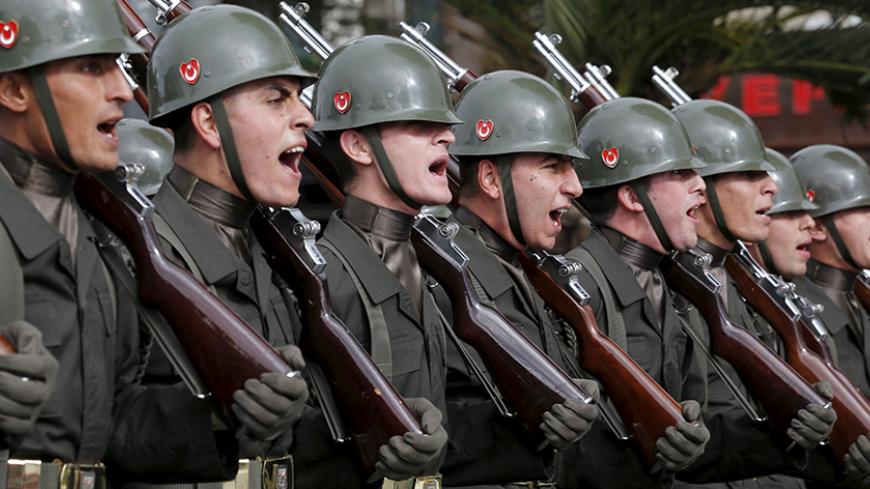 The Turkish military appears to be taking a hands-off approach to the country's toxic political environment, refusing to get stuck between the president's impassioned followers and fervent foes.

In recent years, Turks had come to believe that the word “coup” had been discarded from the lexicon of the civilian-military relationship and that the news media had forgone using the Turkish Armed Forces (TSK) as a tool for shaping perceptions among the public. The virulence of the current political atmosphere is evident in recent speculation and media commentary that the military might once again intervene in politics. Efforts by both the ruling Justice and Development Party (AKP) and the opposition to benefit from this situation will only erode confidence in civilian politics.

The TSK high command evidently have had enough of the allegations about it and felt compelled to share its uneasiness with the public in a rare political statement issued March 31. “Discipline, absolute obedience and firm chain of command are the basic elements of the TSK,” the General Staff remarked in a post on its official website. “It is inconceivable to think that the TSK would tolerate any illegal phenomenon or action that would digress from the chain of command. We have initiated legal action against those who spread such news and comments, which have absolutely no legal and logical basis and which contravene media ethics.” The statement continued, “News and comments in some media organs without any foundation naturally negatively affect the morale and motivation of our personnel.”

Of interest, the Turkish media have split over the identify of the intended recipient of the generals' message. Some believe it was a stern response to a March 27 article, “Operations Targeting Turkey and Erdogan,” by Rasim Ozan Kutahyali in the daily Sabah, which is close to President Recep Tayyip Erdogan. In the article, Kutahyali claims that the Russian plane shot down on Nov. 24 was intentionally targeted by Gulenist pilots in the Turkish air force, and he said 50% of F-16 pilots are pro-Gulenist. Kutahyali added that all such pilots will be dismissed from the TSK en masse in 2016, and if Chief of the General Staff Hulusi Akar resists the move, he will have to resign.

Another possible explanation for the statement is the TSK's discomfort over allegations, particularly in the international media, that it might stage a coup against Erdogan. One such piece is “Could There Be a Coup in Turkey?”, a column by former Pentagon official Michael Rubin, a resident scholar at the American Enterprise Institute. According to Rubin, if the army were to intervene against Erdogan as was done in Egypt, there would not be much opposition to it.

Will there be a coup in Turkey? If so, how? If not, why? A couple of retired military officers shared their opinions with Al-Monitor.

Retired Col. Ali Bilgin Varlik of the Ankara-based Central Strategy Institute noted that Turkey has maintained a democracy for 100 years, albeit with some hiccups. He said, “There can’t be any more coups in Turkey. Grounds for a coup could become fertile [if there were] extreme conditions of ideological and societal fragmentation, economic collapse, lost wars, etc. But I don’t see any of this happening in the near future.”

Why then is such speculation making the rounds? “I think the AKP is using coup rumors to suppress the domestic opposition,” Varlik said. “With these rumors, it prevents its policies from being questioned while it concocts an internal threat to unite its base behind the party.”

A retired general who requested anonymity agreed with Varlik, saying, “Actually, the issue that had forced the TSK to release that statement is precisely the thing we should be discussing. Why is the TSK still a popular tool both for the media and the politicians? Why can’t civilians refrain from reverting to the TSK for issues they should be dealing with themselves, and why is it there are always these expectations of the TSK? There is something missing in respect for the army. These are the matters we should discuss.”

What is happening today is that Turkish society is splitting not over the role of the AKP, but over Erdogan. Today, if the committed anti-Erdogan front is approached, one will hear a virtual chorus of, “It doesn’t matter if the country is set on fire, if there is a crisis or a plot, as long as Erdogan goes.” Meanwhile Erdogan partisans proclaim, “Let there be instability, polarization and clashes, as long as Erdogan remains in power.”

In a country squeezed between fervent, unquestioning Erdogan lovers and those who despise him with a passion, both sides have their expectations of the military. Their intensity is so deep that they don’t hesitate to provoke the TSK or use it to intimidate the opposing side. This is why the TSK is basically saying, “Leave us out of this. We are busy enough.”