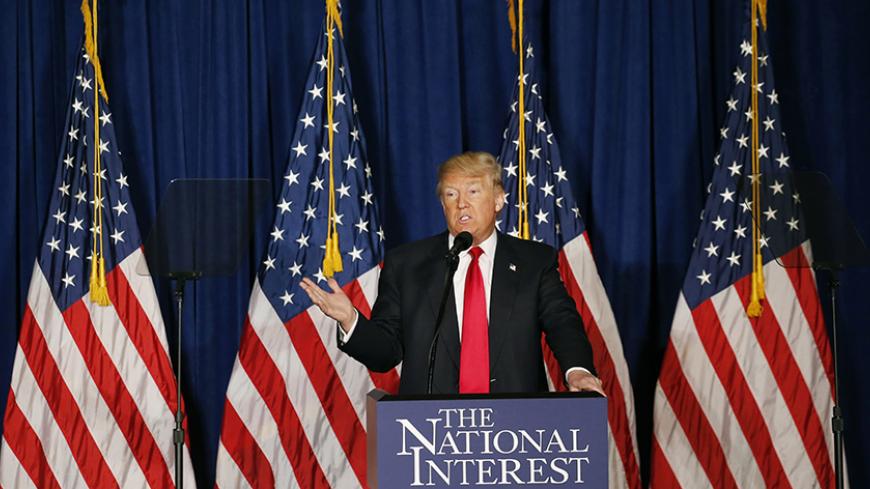 WASHINGTON — Reading from a teleprompter, Republican presidential front-runner Donald J. Trump addressed the Washington foreign policy establishment at a speech at Washington’s Mayflower Hotel on April 27, calling for a less interventionist US foreign policy that values stability over democracy, and which would put America first.

“In the Middle East, our goals must be to defeat terrorists and promote regional stability, not radical change,” Trump said in the rare foreign policy address, hosted by the Center for the National Interest, a Washington think tank associated with the Nixon administration, and its journal, The National Interest.

Restating his opposition to President George W. Bush’s 2003 invasion of Iraq, Trump said President Barack Obama and his first-term secretary of state — and Trump’s presumed 2016 Democratic presidential rival, Hillary Clinton — had pursued reckless military interventions against tyrants in the Middle East that had opened up a vacuum into which had flowed the so-called Islamic State (IS) and chaos.

“It all began with the dangerous idea that we could make Western democracies out of countries that had no experience or interest in becoming a Western democracy,” Trump told the Washington audience that included a few rows of supporters and advisers, the board members of the host think tank and several dozen journalists.

“We tore up what institutions they had and then were surprised at what we unleashed,” Trump said. “Civil war, religious fanaticism; thousands of American lives, and many trillions of dollars, were lost as a result. The vacuum was created that [IS] would fill. Iran, too, would rush in and fill the void, much to their unjust enrichment. Our foreign policy is a complete and total disaster.”

“Although not in government service, I was totally against the war in Iraq, saying for many years that it would destabilize the Middle East,” Trump said. “Sadly, I was correct, and the biggest beneficiary was Iran, who is systematically taking over Iraq and gaining access to their rich oil reserves — something it has wanted to do for decades. And now, to top it all off, we have [IS].”

Trump criticized the Obama administration for not walking out of the Iran nuclear deal talks as a negotiating tactic to get a tougher deal, but notably he did not say that he would tear up the deal were he to be elected. He also repeated several times the quite conventional assertion that Iran could not be allowed to get a nuclear weapon.

“In negotiation, you must be willing to walk,” Trump, most famously the author of "The Art of the Deal," said. “The Iran deal, like so many of our worst agreements, is the result of not being willing to leave the table. When the other side knows you’re not going to walk, it becomes absolutely impossible to win.”

But Trump did not say he opposed a negotiated deal in principle to restrict Iran’s nuclear program.

Similarly, while criticizing the Obama administration for not being tougher in its stance, Trump seemed to share Obama’s skepticism about military interventions, especially in the Middle East.

“We’re getting out of the nation-building business and instead focusing on creating stability on the world,” Trump said.

Trump also said that while he was willing to use US military force if necessary, he would be willing to try to improve relations with Russia.

“We desire to live peacefully and in friendship with Russia and China,” Trump said. “We have serious differences with these two nations, and must regard them with open eyes. But we are not bound to be adversaries. We should seek common ground based on shared interests. ... I believe an easing of tensions and improved relations with Russia — from a position of strength — is possible.”

“Some say the Russians won’t be reasonable,” Trump said. “I intend to find out. If we can’t make a good deal for America, then we will quickly walk from the table.”

“Our goal is peace and prosperity, not war and destruction,” Trump said.

Trump took no questions after his hourlong address. Seated among the first rows of invited foreign policy guests was Harold Rhode, a former Pentagon official who during the Bush administration had been involved in a controversial back channel to a CIA blacklisted Iran-Contra era figure, Manucher Ghorbanifar.

Asked if he was dismayed by Trump’s disdain for the regime change ambitions that had fueled the Bush administration’s intervention in Iraq and the back channel with Ghorbanifar, Rhode said he was not. “I think he is going to be our next president,” Rhode said to Al-Monitor of Trump.

Among other Trump foreign policy supporters in attendance was Walid Phares and John Hajjar, a Quincy, Massachusetts-based attorney, who after the address praised Trump’s speaking out on behalf of the Middle East’s Christians and in opposition to radical Islam.

“We have made the Middle East more unstable and chaotic than ever before,” Trump said in his address. “We left Christians subject to intense persecution and even genocide. Our actions in Iraq, Libya and Syria have helped unleash [IS]. And we’re in a war against radical Islam, but President Obama won’t even name the enemy.”

Alireza Jafarzadeh, the head of the Washington office of the National Council of the Resistance of Iran — the Mujahedeen-e-Khalq's political wing — attended the Trump speech April 27. Asked afterward what he thought of it, he said he was still digesting it.

It was also notable the Republican foreign policy heavyweights who were not in the audience, many of them veterans of the Bush/Cheney administration, some of whom have expressed alarm about the Trump candidacy as being anathema to more interventionist, neoconservative foreign policy values.

Trump, for his part, indicated he would not be looking to the establishment to fill the ranks of his administration. “My goal is to establish a foreign policy that will endure for several generations,” Trump said. “That is why I will also look for talented experts … not people on TV and writing in The New York Times with a history of foreign policy failures.”

Trump also reasserted in a somewhat toned-down way his previous call to halt the immigration of Muslim refugees to the United States because of security concerns.

“We must stop importing extremism through senseless immigration policies,” Trump said. “A pause for reassessment will help us to prevent the next San Bernardino or worse — all you have to do is look at the World Trade Center and September 11th.”

Trump said he would defeat IS quickly if elected president, but said he would not spell out the details how so that he would be unpredictable to the terror group.

“I have a simple message for them,” Trump said of IS. “Their days are numbered. I won’t tell them where and I won’t tell them how. We must, as a nation, be more unpredictable. But they’re going to be gone. And soon.”