While Jordan's strategic relationship with the United States will likely remain strong under surprise presidential victor Donald Trump, the unpredictable leader's positions on the Muslim Brotherhood, Jerusalem and the West Bank settlements are cause for concern. 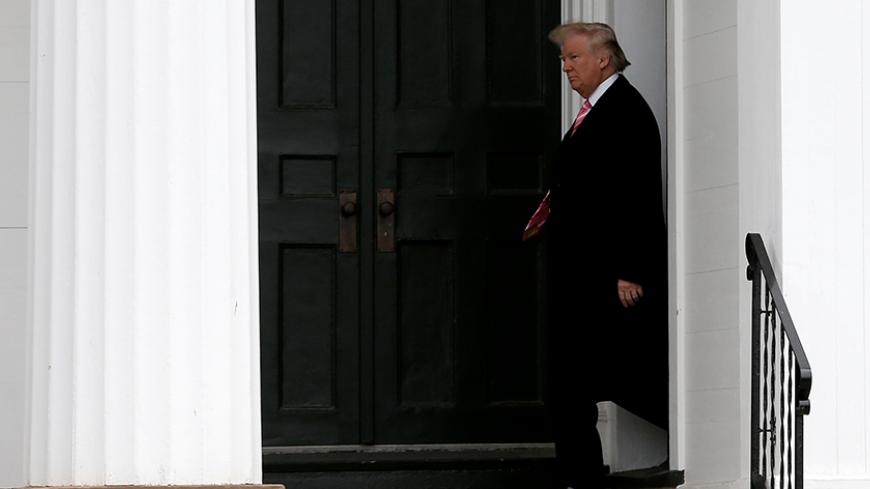 Like most countries, Jordan had been preparing for a Hillary Clinton presidency, which was largely expected to be a continuation of President Barack Obama’s policies in a crisis-ridden Middle East. The former US secretary of state had strong working relations with regional leaders including King Abdullah. For the Jordanian government, a Clinton victory would have meant that strong bilateral relations, especially in security and military fields, would continue.

There had been doubts and concerns when the Democratic candidate told an Iowa audience on Oct. 7, 2015, that a final peace agreement between Israelis and Palestinians is unlikely until both sides “know what happens in Syria” and also depends on whether Jordan remains stable. That statement elicited angry reactions from local commentators, while officials chose to ignore it.

But Donald Trump’s historic upset in the Nov. 8 elections took Jordanians off guard. Abdullah sent the president-elect a congratulatory cable on Nov. 9, but did not call him until Nov. 14. A terse statement from the royal palace said that the king had expressed his wish to work jointly with the new American leader on boosting US-Jordanian strategic relations. There was no mention of Trump’s response.

Since he took over in 1999, Abdullah has been able to strengthen Jordan's strategic relations with Washington. He dealt closely with two US presidents, George W. Bush and Obama, during turbulent times for a post-9/11 America and the Middle East following the US invasion of Iraq. The king is a frequent visitor to the White House and Capitol Hill and enjoys good working relations with officials from both parties. His communication skills and pro-Western policies have won him valuable bipartisan support for Jordan in both the economic and the military fields. In March 2007, he addressed a joint session of Congress pleading for a just resolution to the plight of Palestinians. He has worked closely with Obama to advance the peace process, train moderate Syrian rebels and confront terrorism through a US-led coalition combating the threat of the Islamic State in Syria and Iraq.

Under Obama, US aid to Jordan was boosted from $660 million to about $1 billion annually. American assistance to Jordan is essential as the kingdom faces endemic economic problems made worse by the presence of 1.2 million Syrian refugees who have poured from their war-torn country since 2011.

Few observers doubt that the strategic relationship between Jordan and the United States will shift under Trump, especially in the realm of confronting IS terrorism and religious fanaticism. But many areas of Trump’s Middle East policy remain the subject of much speculation. However, a Trump foreign policy adviser, Walid Phares, told BBC radio on Nov. 10 that the upcoming administration plans to set up a coalition with the Gulf Cooperation Council, Jordan and Egypt to support counterterrorism efforts. Phares also said that Trump might not move the US Embassy to Jerusalem immediately and indicated he would make negotiating an Israeli-Palestinian peace deal a priority.

There has been no official reaction in Amman to his statements, but political commentator Fahd al-Khitan wrote in Al-Ghad Nov. 13, “Reviving an alliance that includes Jordan, Egypt and the GCC countries may have been easier in the past, but after the fall of the [President Hosni] Mubarak regime in Egypt, differing Gulf attitudes toward the military rule in Cairo and declining oil revenues, maintaining such an alliance would be difficult without US financial support.”

Phares was also quoted by a pro-Egyptian government news site Youm7 on Nov. 11 as saying that Trump’s Middle East strategy will include designating the Muslim Brotherhood as a terrorist organization. Jordan has labeled the Brotherhood as an illegal entity but stopped short of banning it, aware of the risks involved in doing so. The movement’s political arm, the Islamic Action Front, won 10 seats in the September parliamentary elections. Trump designating the Muslim Brotherhood as a terrorist organization would create an internal crisis for the Jordanian government.

Former Prime Minister Taher al-Masri believes the relationship between Jordan and the United States will not change under Trump. He told Al-Monitor that the phone call between the king and the president-elect “left a good impression.” But he said that Trump’s policy toward the Palestinian issue remains unclear and it is too early to make judgments. “For now, Trump’s priority is to defeat [IS] and Jordan supports that direction,” Masri said.

But head of Al-Quds Center for Political Studies Orieb al-Rintawi said that while Jordan's strategic relationship with the United States will remain strong, Trump’s position on Jerusalem and the West Bank settlements is a cause for concern. “Obama did not revive the peace talks, but he maintained that the settlements were illegal. Trump does not see it that way, and if he reverses this policy it will mean the end to the two-state solution,” Rintawi told Al-Monitor.

Trump’s position on the future of East Jerusalem will be of particular concern for Jordan, which under the 1994 peace treaty with Israel has a special role to play as guardian of Muslim holy places there. Abdullah has repeatedly criticized Israeli incursions into Al-Aqsa Mosque and attempts to allow Jewish worshippers to pray there. Any alteration to the status of East Jerusalem and the holy places will be seen as a direct challenge to Jordan and to the king’s authority in particular.

Political analyst Amer al-Sabaileh is not optimistic about the future of the Palestinian issue. He told Al-Monitor that Israeli Prime Minister Benjamin Netanyahu will have dramatic influence on Trump’s position toward the Palestinians. “Netanyahu is not interested in striking peace with the Palestinians, and he will be the political compass guiding Trump on issues such as settlements and East Jerusalem,” he said. "Eventually, this will have tremendous negative effects on Jordan’s national security.”

As Jordan looks for further hints of what a Trump presidency will mean for the kingdom and the region, the local mood is apprehensive about the president-elect’s provocative statements on Muslims and radical Islam during his campaign. His recent choice of known Islamophobes such as his national security adviser, retired Lt. Gen. Michael Flynn, to fill key positions in his Cabinet will keep many Jordanians on their toes.