The late senator from Arizona leaves behind a legacy as one of the Senate’s last prominent proponents of US interventionism. 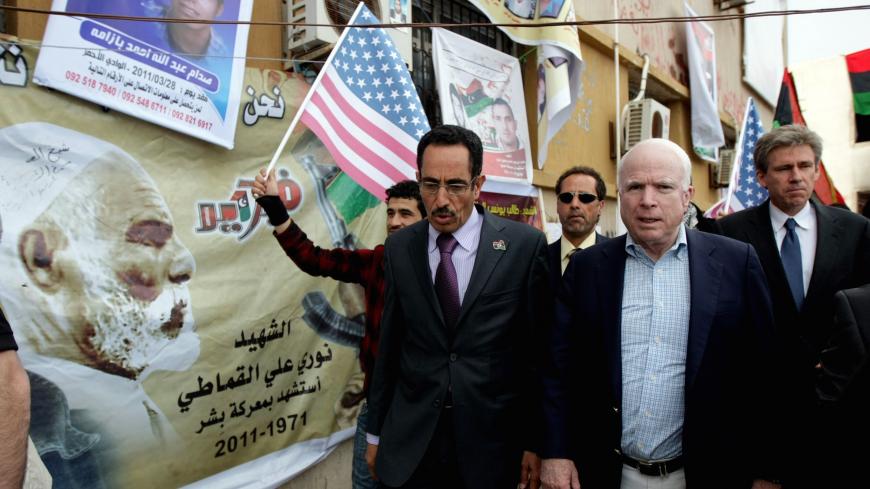 “Within minutes, the senator agreed to see us, surprising even our seasoned lobbyist,” said Fareed Yasseen, Iraq’s ambassador to the United States. “Then ensued one of the most heartwarming and genuine meetings I have attended in my almost two years as Iraq’s ambassador to Washington.”

Trump, frequently at loggerheads with the senator, who died of brain cancer last month, eventually removed Iraq from the list.

Many interpreted McCain’s Sept. 1 funeral as a bipartisan rebuke of Trump. But this meant pitting McCain’s ardor for the long US history of foreign military intervention against Trump’s “America First” agenda.

“It seems to me when we look at the enormous outpouring of sorrow and regret that his passing triggered, in some sense it was a posthumous celebration of American exceptionalism,” Andrew Bacevich, an international relations historian at Boston University, told Al-Monitor. “McCain was an ideologue and the essence of his ideology in that regard was his belief in American exceptionalism.”

Former President George W. Bush made the same connection in his eulogy Sept. 1.

“It’s this combination of courage and decency that makes the American military something new in history, an unrivaled power for good,” Bush said.

Ironically, McCain, who had fervently championed Bush’s 2003 invasion of Iraq on the false evidence that Saddam Hussein had an active program for weapons of mass destruction, eventually called the war “a very serious” mistake in a memoir published earlier this year. In the book, McCain wrote, “I have to accept my share of the blame.”

Nevertheless, McCain still remains beloved by many Iraqis precisely because he advocated Saddam's removal from power. Zuhair Humadi, an Iraqi-American and former secretary-general of Iraq’s Council of Ministers, even went so far as to set up a McCain for President committee in Baghdad during the senator’s failed 2008 presidential campaign.

The Iraqi Kurds are also mourning a longtime champion.

“He stood by us when the Peshmerga needed weapons [against the Islamic State] and he spoke out against the escalation of tensions between Kurdistan and the federal government of Iraq after [the] Kurdistan independence referendum in 2017,” the Kurdistan Regional Government’s representative to Washington, Sami Abdul Rahman, said in a statement.

But 17 years of prolonged US wars in Afghanistan, Iraq and Syria have deprived the American public of its appetite for extensive US military adventures overseas. While a Pew Research Center survey said 72% Americans supported Bush’s invasion of Iraq in 2003, a Real Clear Politics poll last year found that 50% of Americans are “weary” of US military intervention.

“To the extent that today there appears to be not much of a popular appetite for further intervention abroad, I think that what we really see is a tradition that is almost certain to manifest when the circumstances are a little bit different than they are today and when the memories of Iraq and Afghanistan begin to fade,” said Bacevich.

Indeed, many of McCain’s interventionist colleagues are clamoring for the United States to do more in Syria as President Bashar al-Assad, bolstered by his Iranian and Russian patrons, threatens a bloody offensive to retake the last rebel stronghold in the province of Idlib.

“Trump should not repeat the mistakes of [President Barack Obama] by leaving Syria,” Sen. Lindsey Graham, R-S.C., McCain’s closest friend in Congress, told Al-Monitor. “The Middle East has been turned upside down. The Iranian regime was enriched badly by the nuclear deal. When we left Iraq, we paid a price. [McCain] told Bush you don’t have enough troops, he was right. He told Obama if you withdraw the troops at the same time you introduce them into Afghanistan, it won’t work. He was telling Trump you should engage Iran in Syria, or you’ll regret it.”

Trump argued for less military intervention in the 2016 campaign as part of his “America First” approach, frequently lambasting his opponent, former Secretary of State Hillary Clinton, for her vote in favor of the Iraq war when she represented New York in the Senate. But Trump’s “America First” impulse is often at odds with his policy of advancing a tougher US posture on Iran, a posture McCain fiercely believed in.

McCain infamously chanted “bomb, bomb, bomb" Iran in 2007 during his campaign for the Republican presidential nomination; this reiterated a parody that emerged during the 1979 Iran hostage crisis of a song the Beach Boys had made famous. He also maintained that Iran was the “real problem” in the region, pointing to its support for Shiite proxies throughout the Middle East, including Assad.

In 2013 McCain crossed into Syria and took a photo with a group of Sunni rebels as part of a bid to convince the Obama administration to provide weapons and support to the Syrian opposition, which it eventually did. But the trip caused an international uproar when family members of kidnapped Lebanese Shiite pilgrims accused two of the rebels of being involved in their abduction.

Prior to that, McCain visited Libyan forces fighting dictator Col. Moammar Gadhafi, urging the United States to do more to support the rebels after the United States and its NATO allies instated a no-fly zone over the war-torn country.

“I would say [McCain] has a great responsibility for the adverse results in Libya and Syria even more than he does Iraq,” Ted Carpenter, a senior fellow at the libertarian Cato Institute, told Al-Monitor. “He had consistently been one of the most enthusiastic lobbyists about US support for rebel forces in Syria despite growing evidence about the extremist nature of many of the rebels.”

Even now, as Assad moves to crush the last of Syria’s Islamist and non-Islamist opposition alike, Graham said it’s not too late for Trump to act in Syria. However, he added that right now Trump “has no plan other than we shouldn’t go into Idlib.”

And yet Graham — and McCain, posthumously — may get their wish.

The Washington Post reported Thursday that Trump has agreed to keep some 2,000 troops in Syria indefinitely to counter Iran despite previously pushing for their withdrawal by the end of the year — a withdrawal vociferously opposed by McCain.

At the same time, Russia has threatened to attack al-Tanf, a strategic base with US troops situated near the Syrian, Iraqi and Jordanian borders. In turn, US forces stationed at the garrison began military drills Friday.