After Kurdish forces took control of parts of northeastern Syria, they have found themselves facing many challenges, including the management of their oil wells. 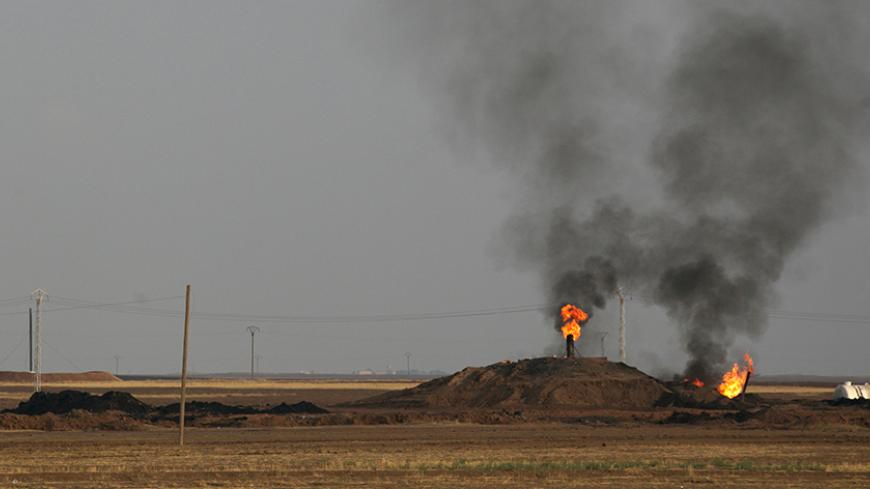 All military forces, such as the Islamic State (IS), Jabhat al-Nusra and the opposition Kurdish forces, sought to control the areas rich with underground resources. These resources are concentrated in Deir ez-Zor and the Kurdish areas in the Rojava region, a de facto autonomous region of Syria.

Oil wells are scattered across the Kurdish areas, in particular in Rmeilan. After the outbreak of the Syrian revolution and with the displacement of the area’s residents to neighboring countries such as Iraq and Turkey, the oil wells were almost shut down.

The authorities tried to operate some of the wells, at least partly, to allow the residents to get by and to deter them from resorting to dangerous means of oil extraction that caused explosions, which led to deaths and injuries.

In some areas of Syria, such as Deir ez-Zor, tribes took over the oil wells and started running them for individual interests. Later on, in mid-2014, IS, hoping to finance its military forces, tried to invade all Kurdish oil-bearing areas to control the wells and impose a monopoly over all the oil resources.

However, the situation in the Kurdish areas was different from the other provinces and areas in Syria. The Kurdish forces that controlled these areas, such as the People's Protection Units, fought and deterred IS, therefore keeping the oil wells intact.

Engineer Muhammad Ali told Al-Monitor, “Under [Bashar] al-Assad’s regime, Rmeilan oil fields were highly productive. The oil proceeds accounted for one-third of the Syrian national product, but the tense political and security situation in Syria led to the closure of many oil wells that lost their value and standing.”

He added, “Oil proceeds resulted mostly from the wells in the Kurdish region, yet we were often short of oil due to the policy of the ruling Socialist Arab Baath Party in Syria that aimed to impoverish our region. IS tried to implement the same scenario by controlling and exploiting oil wells, but it was forced out by the Kurdish forces who defended their regions. Although oil proceeds are currently insignificant, oil is available in our fields at a knock-out price.”

Despite the prevailing tensions in Syria in general, the Kurds tightened their grip on the oil wells and oil production. In early 2014, oil distribution became, in light of the declaration of self-rule in the Kurdish provinces in Rojava, governed by laws. Any party seeking to monopolize this substance or sell it on the black market was liable for arrest.

Civil engineer Mona Ibrahim Dawud, co-head of the Municipality of People in Derbasiya, told Al-Monitor, “On a daily basis, we obtain approximately 75,000 liters of diesel fuel from the wells to cover the needs of the citizens. We are approaching the summer season, and the agricultural region of Derbasiya and its countryside under our administration need water to irrigate the crops through artesian wells requiring engines to pump up water. Moreover, a large share of oil is allocated to reconstruction and public works companies operating within our region.”

She added, “A shortage was registered in the winter, which led us to distribute oil over two batches to the citizens. Each family was entitled to two batches of 320 liters. Seven municipalities are subordinated to the Municipal Council of Derbasiya, with a total population of 20,000 people. We have almost 94 employees in our municipality, and our monthly salaries budget reaches nearly 3 million Syrian pounds [around $13,000] — a huge amount given the situation in the region. The democratic self-rule [Rojava] region supplies our areas with fuel at a cheap price of nearly 35 Syrian pounds per liter [about $0.15].”

Derbasiya lies on the Syrian-Turkish border. In addition to its contribution to the Syrian national oil proceeds, it is characterized by its fertile soil and agricultural crop. These areas were Syria’s oil lifeline under Assad’s regime. Before the outbreak of the Syrian revolution, oil was intensively abundant at a giveaway price of approximately $0.3 per liter.

Mohammed Khalaf, the co-head of Shaab Municipality in Derbasiya, told Al-Monitor, “We suffered a sharp oil crisis. Oil was monopolized by smugglers and outlaws, especially at the onset of the Syrian crisis. At a later stage in early 2014, things were controlled by the Kurdish authorities who controlled the region after the outbreak of the revolution in 2011. They arrested any person trying to monopolize or steal oil and sell it at higher prices.”

He added, “We did not deal with them in our capacity as a state authority, but we rather tried to reason with them and convince them that we must work together to build our region and protect our citizens. These persons cooperated with us, and we were able to ensure a fair distribution of oil over the regions based on the people’s needs. We also made sure that the local administrations supervised the whole process to protect the people’s rights.”

Despite all attempts to control oil resources and ensure their fair distribution to the citizens, the Rojava residents are still demanding officials to exert more effort to ensure the provision of oil quantities and improve the quality of the oil resources.

This is especially true after the declaration of a Kurdish federation under the democratic self-rule system on March 17. This declared federation has yet to obtain international recognition amid intensive Kurdish efforts.