The Lebanese government rift and lack of a clear and effective policy for dealing with security gaps at the Rafik Hariri International Airport in Beirut may lead international and Arab airlines to suspend their flights to Lebanon. 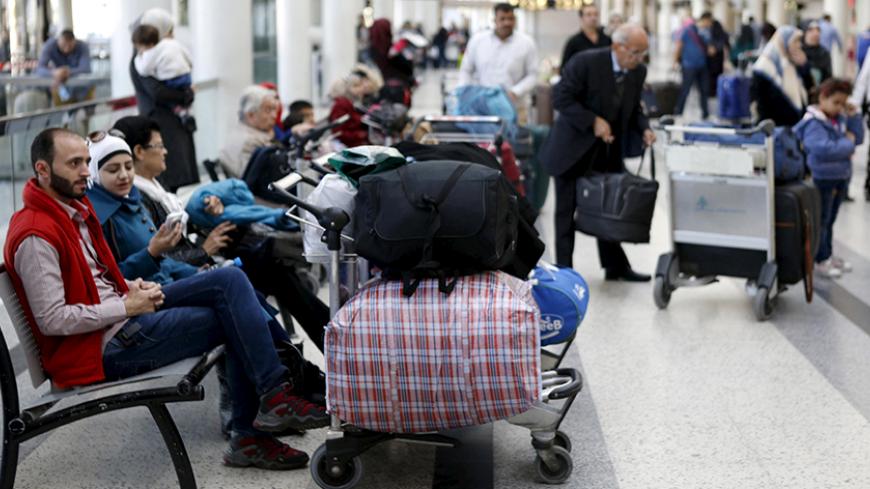 Passengers sit next to their baggage as they wait for their flight at Beirut's international airport, Nov. 21, 2015. - REUTERS/Mohamed Azakir

With the trash crisis still pending, having tainted Lebanon’s image around the world and exposed its government’s division and incompetence when it comes to performing a basic duty like waste collection, another crisis looms on the horizon: Lebanon’s airport security and its compliance with international safety standards are now called into question.

This time, too, the government has failed yet again to perform one of its essential duties: preserving security and protecting a vital economic facility at a critical time when terrorism is striking in many world capitals and airports, with the latest incident at Brussels airport on March 22.

Lebanon has already been the stage of terrorist attacks, the latest of which was the twin explosions that shook the Burj el-Barajneh neighborhood in Beirut’s southern suburb on Nov. 12, 2015, only two days prior to the Paris attacks.

Airport security returned to the forefront with Lebanese Interior Minister Nouhad al-Machnouq’s official three-day visit to London on March 20, which aimed to enhance bilateral ties between Lebanon and the United Kingdom and explore opportunities for cooperation on security and counterterrorism. During his visit, Machnouq met with several British officials who voiced their concerns over Beirut airport security.

“I am raising my voice now, because I am tired of the situation,” he said in a statement issued March 25, holding his colleague Minister of Public Works and Transportation Ghazi Zeaiter responsible for the current security gaps and referring to him as the airport’s “tutelage minister.”

Two technical committees comprising aviation safety experts from the United Kingdom and France visited Rafik Hariri International Airport on Jan. 16, and concluded with comments on the administrative, technical and security situation at the airport.

Safety concerns were raised in regard to the Beirut airport, which has no fence or wall equipped with surveillance cameras and protection devices. In addition, the luggage inspection methods are inefficient due to a lack of scanners and the baggage carts are obsolete.

British Airways had already expressed concerns over baggage inspection and asked the airport administration to run a random inspection on passengers via drugs and explosives detectors. But the most important announcement was communicated at a press conference Jan. 31 by Fadi Hassan, the head of the airport. Hassan addressed three technical gaps: the airport’s perimeter wall lacks surveillance cameras, the baggage carts need to be replaced and X-ray scanners should be deployed at the airport.

Machnouq’s statements in London prompted a response from Zeaiter, who held a press conference March 29. Zeaiter blamed the problem on the Lebanese government, accusing it of negligence with regard to airport security, as no funds have been allocated to address the security gaps.

He said, “They allocate money for interior ministers, Lebanon’s delegation to Milan and the Ministry of Education, but not for the Beirut airport.” He added that nothing substantial will comfort the French and the British concerns because of a lack of funds. Zeaiter said that an approximate sum of $1.4 million was needed to meet the costs of the necessary security provisions.

At another press conference April 6, Zeaiter spoke of an amount that is estimated at $30-$35 million to “guarantee airport security and general aviation safety in all departments.”

If the amount of $1.4 million seems too small for a security renovation plan at an international airport, the second higher estimation reveals the need for a clear and accurate budget for this purpose.

The Ministry of Interior offered a more detailed figure of $26,239,555 to complete the work it is overseeing, including the installment of surveillance cameras, scanners and inspection equipment.

However, this amount was deducted from Saudi Arabia’s donation of $1 billion, which was canceled by the donor due to "special reasons," according to the Interior Ministry’s statement in January.

This was a prelude to the unfolding of the crisis that broke out between Lebanon and Saudi Arabia, after the latter claimed that “Hezbollah controls Lebanon.”

The harsh reality is that today, the appropriation of funds for this specific project encounters a financial problem since the required funds have been either canceled after the suspension of the Saudi donation or cannot be met by the budget reserves due to the lack of a Cabinet decree, which in turn is subject to the current division within the government.

A Cabinet source told Al-Monitor, “We were not able to include the issue on the agenda that was discussed during the Cabinet session on April 7. There is no consensus among the ministers as to the items on the agenda and the disagreement revolved around the priority of the addressed issues.” He added, “The airport [security] issue is of critical importance as it was the main subject of discussion between the British foreign minister and Prime Minister Tammam Salam during the surprise visit of Philip Hammond to Lebanon on March 30.”

Former member of parliament Fares Soueid, the March 14 secretariat coordinator, tweeted April 8, “London will be the first European capital to impose an embargo on flights coming from Beirut if the government fails to implement security reforms.”

Gen. Wehbe Katicha, the Lebanese Forces adviser and a leading figure in the March 14 coalition, told Al-Monitor, “Lebanon is constantly under threat of suicide attacks. The main problem is that there is no government in Lebanon. Finding a radical solution for the technical gaps at the airport is complicated; not only that, but the airport crisis may persist longer than the current sanitary crisis.”

The current security situation at the airport in Beirut does not bode well. No solution is available in the short term. On Twitter, each minister marches to the beat of his or her own drum, while Lebanon steps closer to anarchy.

After the garbage crisis and the unfolding of the Arab sanctions on Lebanon — represented by the suspension of the Saudi donation for considering the Lebanese government under Hezbollah’s control — will the government rift over Beirut Rafik Hariri Airport drive international and Arab airlines to halt their flights to Lebanon, intensifying the country’s isolation? This does not seem unlikely.