Some say rumors of a potential bombing at the Beirut airport could be designed to pressure Lebanon to agree on a political settlement to elect a president. 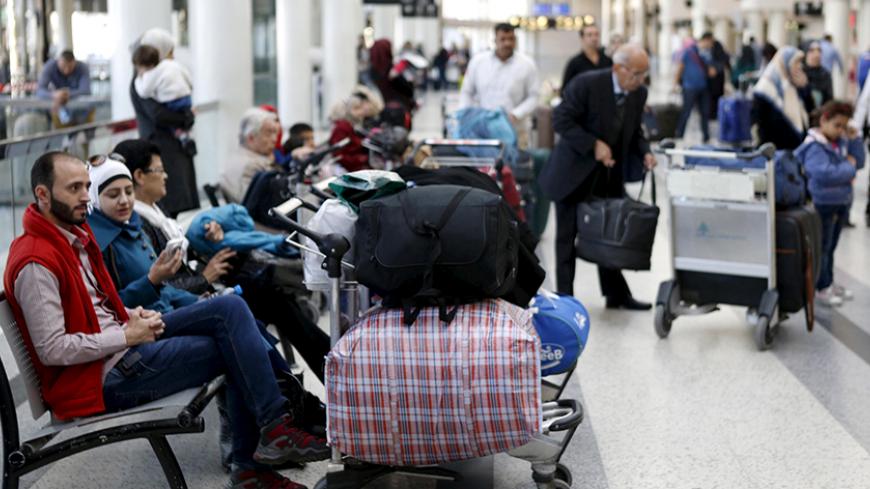 Passengers sit next to their baggage as they wait for their flight at Beirut's Rafiq Hariri International Airport, Lebanon, Nov. 21, 2015. - REUTERS/Mohamed Azakir

In mid-January, Beirut was preoccupied with news about potential security incidents or disturbances in Lebanon. While there was no noteworthy incident to report, insinuations continued to circulate in the media and among politicians and diplomats, suggesting the matter could be political. What's the truth behind the rumors?

It all started Jan. 13 with leaks to the media that there were lapses in security measures and inadequate equipment at Beirut's Rafiq Hariri International Airport. The news circulated that Lebanon is still on the EU air safety blacklist, though there is no official list.

Al-Monitor communicated on the same day with Public Works and Transport Minister Ghazi Zeaiter, whose ministry supervises the airport’s operations. Al-Monitor also contacted the airport’s aviation management officers. Zeaiter told Al-Monitor that he planned to hold a press conference at the airport to respond to the allegations, which he said were false.

However, speaking to Al-Monitor on condition of anonymity, a senior official at the Directorate General of Civil Aviation confirmed having information that at least two European airlines, Air France and British Airways, received warnings from reliable sources that their flights to the Beirut airport might be subject to a terrorist act.

According to the official’s information, airline officials expressed their concerns over these warnings to the Lebanese government and insisted that the airport implement maximum security measures.

Zeaiter said at his Jan. 16 press conference that the Beirut airport is not blacklisted and that any lapses in the work of the General Directorate of Civil Aviation had been handled. Surprisingly, while Zeaiter was trying to reassure the public, Environment Minister Wiam Wahhab tweeted on the same day, “Is it true that an attack by the Islamic State against an Air France plane was uncovered at the Beirut airport?”

This shocking tweet required an immediate response by the Lebanese Interior Ministry, which a few hours later issued an official statement denying knowledge of any planned terrorist act against any scheduled flight to or from the Beirut airport. The same statement pointed out that airport security has been under scrutiny by foreign companies operating there, and their concerns have been resolved.

Wahhab replied to the Interior Ministry’s statement in another tweet: “The operation was scheduled to be carried out on Jan. 8, similarly to the attack against the Russian jet. It was revealed by US agencies, which informed the French.”

Later that day, he added, “The airport was not infiltrated, but the operation was uncovered during the preparation phase.”

As Wahhab noted that US security disclosed the information, eyes turned to a Jan. 15 visit made by Richard Jones, the US interim chief of mission, to Lebanese Foreign Minister Gebran Bassil.

Following the visit, Jones was asked by journalists at the Ministry of Foreign Affairs if he was concerned over Lebanon’s security situation. He replied, “Unfortunately, we have concerns over the situation in almost all of the world's countries at present. We have lately witnessed the tragic incident in Jakarta on Jan. 14; a similar incident occurred in Burj el-Barajneh in Lebanon on Nov. 12, 2015, as well as the attacks in Paris on Nov. 13, 2015, and in other countries. We have always had security concerns. Yet we are sure that active cooperation with Lebanon is to the advantage of the Lebanese people, the Americans and foreigners residing in Lebanon.”

This statement seems to intersect with the information referred to by Wahhab. Yet Bassil told Al-Monitor he did not discuss the security situation with Jones during his visit.

Al-Monitor spoke with Wahhab by phone to learn about his source and its credibility. He attributed his information to “official security sources that are directly concerned” with the information he revealed, and added, “These sources and information are highly credible and reliable.”

Wahhab further stated that his information was confirmed by the Interior Ministry replying to his first tweet, which came in the form of a question. He added that when he revealed in his second tweet that the terrorist act under discussion had been uncovered during the preparation phase and that it had been planned for Jan. 8, the Interior Ministry did not reply.

Among the Lebanese public, some link the rumors with the ongoing political crisis since the president's office was left vacant on May 24, 2014. Some people think that a bombing could have been planned in Beirut to force a breakthrough in the impasse. A significant security breach would require Lebanon to go along with foreign efforts to improve overall security through a comprehensive settlement that includes the election of a new president.