Will Syria's Kurds succeed at self-sufficiency?

Despite major obstacles and challenges, the Kurds are making efforts to achieve economic self-sufficiency in areas they control in northern Syria. 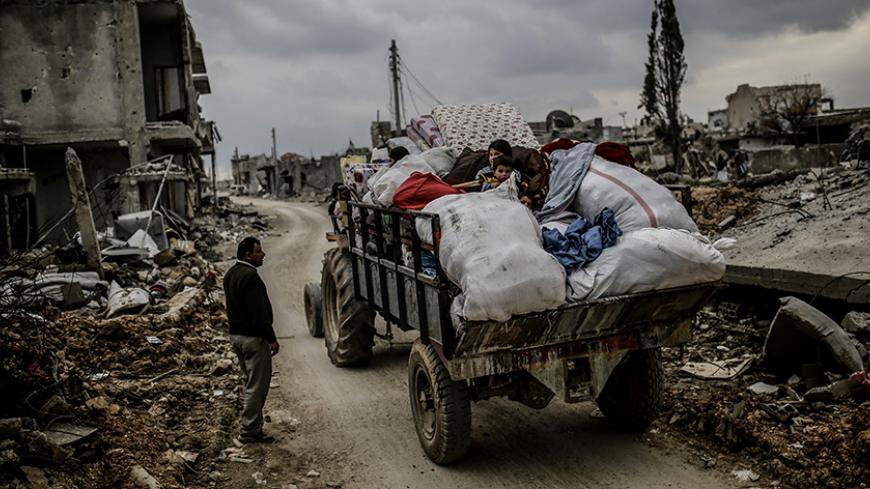 Syrian Kurds sit in the back of a truck filled with goods as they return to the Syrian Kurdish town of Kobani, March 24, 2015. - YASIN AKGUL/AFP/Getty Images

GAZIANTEP — Most Syrian cities are reeling under the effects of the ongoing civil war, which has naturally dealt a blow to the local and national economies. Amid the conflict, the Kurdish-controlled areas of Jazira, Kobani and Afrin in the north are attempting to become economically self-sufficient, but receiving goods, including raw materials and medicines, from inside Syria is a struggle. Traders control the market entirely, deciding on shipments and setting prices at will, which has resulted to high prices. Also, border crossings with Turkey have been closed since 2012, because Ankara accuses the Kurdish Democratic Union Party (PYD), which administers the Syrian Kurdish areas, of being affiliated with the Kurdistan Workers Party.

The Kurds have been in control of some areas in Hasakah province and Kobani and Afrin in the Aleppo countryside since 2012, after the forces of President Bashar al-Assad abandoned most of their positions and stations there. Subsequently, the Kurds established popular councils in a move toward political autonomy and economic development.

Jamal Hamou, deputy head of the Economic Body, the equivalent of a Ministry of Economy under the democratic autonomous administration in Syrian Kurdistan, told Al-Monitor that the Kurdish areas rely on goods, including vegetables, medicines and relief items, delivered through the Simalka border crossing with Iraqi Kurdistan. Hamou said that these items are considered relief goods because their importation is not officially approved by both Baghdad and Damascus. The government in Baghdad is, however, facilitating their entry. Hamou noted that the lack of sea access is a “drawback,” stating, “The absence of a sea outlet or a port affiliated with the Kurdish region of Rojava is exacerbating the blockade on the region, especially since Turkey is preventing the entry of goods to the area because of the PYD’s control.”

In January 2014, the Syrian Kurds established autonomous rule for the territory they control, with Kurdish, Arab and Christian areas all taking part. According to Hamou, the Trade, Economy, Oil Resources and Customs Bodies contribute to the salaries of some 3,700 employees. “The bodies revenues amount to 175 million Syrian liras [$350,000] per year, and they form part of the autonomous administration's budget,” Hamou said.

Hamou said that autonomous rule has encouraged investment by traders from the region as well as those displaced to it to create an economic structure and increase the areas' revenues. The democratic autonomous administration has also put money into implementing a corn oil project and cheese and dairy operations as well as wheat and flour mills.

Hasakah province was once considered Syria's bread basket, given the abundance of wheat and cotton grown there. Production of both has decreased in recent years because of fighting between Kurdish and Islamic State forces and the resulting migration of residents from the area. According to farmer Mohammed Khalil, Jazira’s wheat output previously had reached some 1.8 million tons a year, but in the last year did not surpass half a million tons.

Hamou attributed this decline to the reduced agricultural season due to the reluctance of farmers to risk investing during wartime, the lack of basic materials including compost and high costs. Fertilizer and seeds were imports before the war, and with quantities now low, prices have spiked. Also, diesel and electricity are not always available because of the war. “The regime is still buying wheat from farmers [in Hasaka] in order to provide flour and bread to other provinces,” Hamou said.

Asked how goods are flowing in Kurdish and other areas as the war drags on, Hamou said that they are being moved through “war brokers,” also called “war traders.” One of the officials in charge of the Simalka crossing to the Syrian side told Al-Monitor, “The crossing prioritizes the entry of basic foods, in addition to vegetables and energy drinks. Sheep are also being exported to the Iraqi Kurdistan region.”

Ahmed Yousef, head of the Economic Body and chairman of Afrin University, claimed that the Kurdish-controlled areas' economic output, which includes agriculture, industry and oil, accounts for about 55% of Syria's gross domestic product. Jazira’s agriculture accounts for 17% of Syrian production. “In a bid to secure our initial needs, we have come to develop plans adapted to the [realities of the] war, so we have used the resources of our area, especially agricultural ones,” Yousef said.

One big challenge for the Kurds is that goods from abroad are usually priced in foreign currencies, which are high compared to the Syrian lira. Yousef noted, “This leads to higher prices. Added to this is the lack of some essential items, such as medicines, sugar and rice.”

The Syrian Kurds held a conference in Afrin last October, followed by another conference that month in Rmelan with the aim of developing an economic plan for the Kurdish areas. “The two conferences discussed agriculture, trade, electricity and the development of an advanced program aimed at easing the blockade and developing an agricultural [plan],” said Yousef. “The plan contributed to moving about 50% of the industrial factories and workshops from the destroyed city of Aleppo to Afrin, and the [Kurdish authority] is securing the needs of those workshops and providing shipping companies, which total 20 in Afrin.” Yousef also said there is a plan to establish an industrial zone for traders in Afrin.

The Kurdish areas experience sporadic shortages. In April, tomatoes were scarce and their price soared. At the beginning of the year, no sugar was to be found. As a result, on April 19, the customs administration in Jazira province scrapped the tariffs imposed on food entering the Kurdish areas to encourage the entry of more products.

Asked about Afrin's ability to become self-sufficient, overcome the economic blockade and serve as a model for the other Kurdish areas, Yousef said that the idea dates back to 2012, when a group of Kurdish traders and industrialists in Aleppo formed the Producers Union in Syria’s Western Kurdistan. That step was followed by the establishment in April 2014 of the Chamber of Commerce and Industry in Afrin, which includes about 300 traders and industrialists. In 2014, the Council of Investment Management was established by the democratic autonomous administration, according to Yousef, “to organize work in Afrin and approve the implementation of several projects.”

Yousef pointed to the production of 32 tons of laurel soap and its exportation to Syrian cities and Turkey as one of the economic successes of autonomous rule in Afrin, in addition to this is the garment industry. “Two million pairs of jeans are produced per month and exported across Syria,” he said.

One of the major difficulties for the autonomous administration is providing reliable power. The Kurdish regions have been plagued by power outages for three years now, resulting in reliance on generators.