After years of a cool relationship between Jordan and Saudi Arabia, the two Arab kingdoms seem to be united to fight Iran’s regional interference. 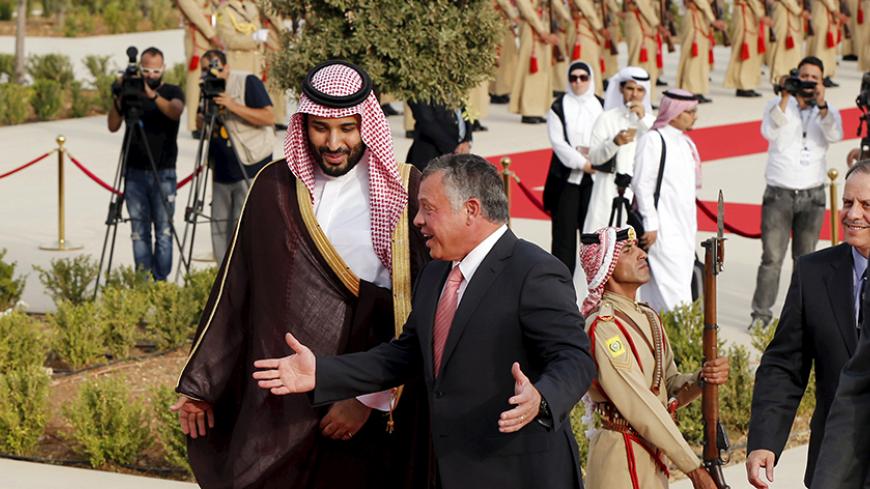 Jordan’s pivot to Saudi Arabia, specifically over the latter’s hard-line stand on Iran and its alleged interference in Arab countries’ affairs, took a major leap forward following the visit April 10 by Saudi Deputy Crown Prince Mohammed bin Salman, where he met with King Abdullah in the port city of Aqaba. Mohammed, who is also Saudi Arabia’s defense minister, flew from Cairo where his father, King Salman bin Abdul-Aziz Al Saud, had concluded what was described as a historic visit to Egypt.

In Cairo, Salman and Egyptian President Abdel Fattah al-Sisi oversaw the signing of strategic cooperation agreements covering economic projects and military cooperation between the two countries worth billions of dollars.

Following Mohammed’s short visit to Jordan, the royal court issued a joint statement that announced a package of measures intended to “enhance cooperation between the two countries.” Jordan and Saudi Arabia underlined “the importance of political consultation between the two countries over regional issues and crises, stressing the importance of political solution as the best option to end them and the need to preserve the territorial unity, sovereignty and stability of the regional countries, rejecting interference in the internal affairs of these states.”

But what was more important is that the two sides stated their rejection of “the policy of interference followed by Iran in the region, which incites sectarian sedition and fuels terrorism.” The statement warned Iran “against continuing with its present approach, which deepens disputes and conflicts in the region and jeopardizes its stability.”

This was the first time in recent years that Jordan had taken a clear position on alleged Iranian policies in the Arab region. By adopting the Saudi position, Jordan was not only abandoning a strategy of keeping all its options open, but it was now ready to follow its words with action.

On 18 April, almost a week after Mohammed’s visit, Amman recalled its ambassador in Tehran for consultations. Government spokesperson Mohammad al-Momani told Petra news agency that the decision was taken after Jordan had supported the nuclear deal between Iran and the international community. “We had hoped that the deal would pave the way for improved Arab-Iranian relations based on good neighborhood relations and the principle of noninterference in the internal affairs of others,” he said. But Momani added that following the signing of the nuclear deal Iran had acted in a way that “represented unacceptable interference in the affairs of Gulf states, which we cannot accept because it leads to the destabilization of the region.”

Momani defended Jordan’s position in the aftermath of the attacks against the Saudi Embassy in Tehran in January. Jordan was criticized by Saudi commentators for not expelling the Iranian ambassador to Amman and opting to deliver a letter of protest instead. That incident and Jordan’s reaction to it highlighted an unprecedented phase of cool relations between Amman and Riyadh following the succession by Salman of his late brother King Abdullah last year.

Jordan’s King Abdullah differed with Saudi downplaying of the threat of the so-called Islamic State (IS) last year, and opted instead to focus on Iran’s regional threat and the crisis in Yemen. Jordan’s royal court denied reports by Middle East Eye that Abdullah had belittled the importance of the Saudi-led Islamic military coalition, announced last December, in conversations with US senators in January.

The Jordanian pivot to Saudi Arabia is a serious one, according to a number of observers. Abdullah and Mohammed discussed a number of agreements aimed at boosting the Jordanian economy. While no figures were mentioned, the two sides agreed to set up a joint investment fund, developing military cooperation, enhancing cooperation in the field of energy, uranium mining and generating electricity using nuclear power, and increasing trade exchange.

This comes at a time when Jordan’s national debt has reached $35 billion and the economy continues to suffer as a result of hosting more than 1.2 million Syrians. Saudi Arabia has historically supported Jordan financially, and in the aftermath of the so-called Arab Spring it led a $5 billion Gulf Cooperation Council (GCC) grant to the kingdom. That grant is expected to be renewed this year for another five-year period.

Former Prime Minister Taher al-Masri told Al-Monitor that both Saudi Arabia and Jordan continue to maintain their “historic relationship,” but now such ties are more important in light of “Iranian vicious interference in Arab affairs and the dramatic changes that could take place where some countries may disappear from the map.”

Masri said that Jordan was never interested in establishing pioneering relations with Tehran, as it was clear that Iran had ambitions in Arab countries and Jordan knew that.

His position was echoed by Adnan Abu Odeh, former chief of the royal court, who told Al-Monitor that Jordan and Saudi Arabia have a common interest in combating terrorism and stemming Iranian interference in Arab affairs. “Jordan has adopted the Saudi position on Iran and that is what it believes,” he said. “King Abdullah’s attendance of the military exercises [held in Saudi Arabia in March] is testimony to Jordan’s support of the Islamic military coalition led by Saudi Arabia, and it is a testament to the fact that Jordan and Saudi Arabia are on the same side,” Abu Odeh said.

Still, political commentator Sultan Hattab admitted that Jordan-Saudi relations had passed through a tepid stage before, but he said that Jordan and Saudi Arabia need each other at this stage, as Riyadh wages a full diplomatic offensive against Tehran. “Jordan is protecting the frontiers of Saudi Arabia and the Gulf region as a whole,” Hattab told Al-Monitor. “This is a fact that can’t be changed, and while Jordan has tried to follow an independent path regarding Iran in the past that has now changed,” he said.

The reality, Hattab said, is that “Jordan and Saudi Arabia need each other more than ever with regard to taking a common stand on Syria, Yemen, IS and Iran.” In his view, Saudi Arabia has taken the lead in confronting these regional challenges and Jordan has decided to back Riyadh’s position on all.

What is certain is that the pivot to Saudi Arabia is a strategic decision by Amman that paves the way for increased financial backing of Jordan as Riyadh attempts to consolidate a common regional front against Iran.