While Israeli Jews have always demonstrated solidarity with Jews around the world, they reject demonstrations of solidarity by Israeli Palestinians toward their brothers under occupation. 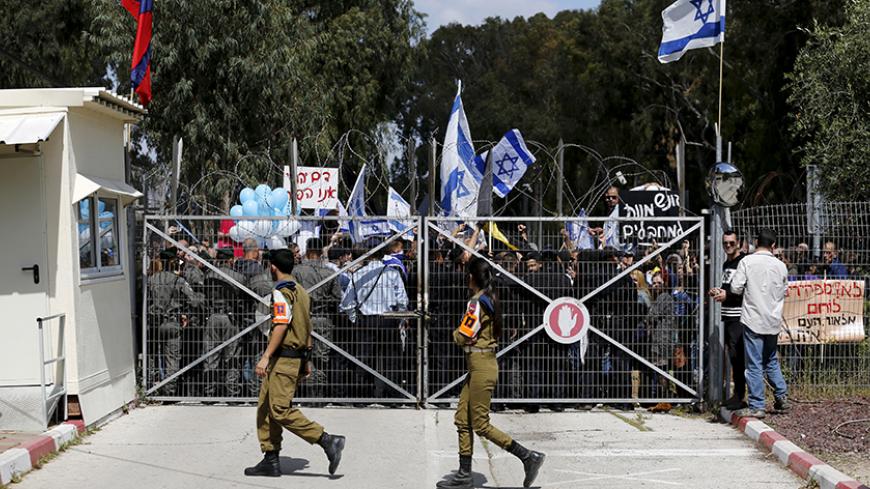 Israeli right-wing protesters demonstrate outside a military court during a hearing of an Israeli soldier who the military said had been arrested after he shot a wounded and motionless Palestinian assailant in Hebron on March 24, near the southern Israeli city of Kiryat Malachi, March 29, 2016. - REUTERS/Amir Cohen

The storm generated by Knesset member Zuhair Bahloul of the Zionist Camp for refusing to label the stabber of an Israeli soldier in Hebron a “terrorist” is yet another lesson in the complex reality of Arab society in Israel. The bloody conflict between their fellow people, the Palestinians, and their fellow citizens, the Jews of Israel, traps Israel’s Arab citizens between a rock and a hard place: solidarity and empathy on the one hand, and denial and repression on the other. In June 2014, Knesset member Haneen Zoabi of the Arab Balad Party dared argue that the killers of three Israeli youths in the West Bank were not terrorists. The agonized shrieks of Israel’s elected officials reverberated at the time through the halls of the Knesset.

Bahloul was decrying the fact that for Israelis, “anyone struggling for his liberty and his independence is a terrorist.” Zoabi voiced her solidarity in cruder terms. She said that her occupied people will keep resorting to violence “until Israeli citizens and society will wake up and feel the suffering of the other." Similar comments have been made for decades by Israeli Palestinians.

But the troubling innovation is to be found in the Jewish-Israeli society. The sayings ''All of Israel are responsible for one another'' (Talmud, Shevuot 39a) and ''All Israel are friends'' describe a society proud of its ethos of solidarity and mutual responsibility. But it is that same society that violates the right to solidarity among Israel’s Arab citizens. It refuses to understand that Arabs and Palestinians, too, can have an ethos of solidarity and a sense of mutual responsibility for each other. Jews the world over fought for the release of the so-called prisoners of Zion, demanding that the Soviet Union open its gates to a Jewish exodus. We, the Jews, cried out “Let my people go” (Exodus 9:1); the African-Americans cried out “Let my people go” and demanded that the world impose an embargo on South Africa under apartheid.

The Palestinian nation is also the nation of Bahloul and Zoabi. It is their right — if not their moral responsibility — to support its struggle for national freedom and even support its call to boycott Jewish West Bank settlements. Nonetheless, Bahloul stressed that he ruled out the use of violence against civilians. This, despite the fact that on his way to the Knesset he probably passes through an avenue, a square or a street named after the activists of the Irgun and Lehi, the two Jewish pro-independence underground organizations that placed bombs in a crowded market in the city of Haifa, murdered passengers on Palestinian buses and hung British troops (before Israel was established).

The young Palestinians who stab Israeli soldiers did not invent the ethos of the brave “who gave their souls for the homeland” (a phrasing often used in Israeli commemoration ceremonies). The anthem of the Lehi underground, “Unknown Soldiers,” contains the lines, “Our will is to be forever free/ Our dream – to die for our country.”

The words “Only death will discharge us from [our] ranks'' are engraved on the tombstone of Lehi leader Avraham (Yair) Stern, who wrote the anthem. On the statue of the roaring lion erected in Kibbutz Tel Hai in memory of Joseph Trumpeldor, a Zionist activist who died in 1920 while defending Tel Hai, are etched the words, “It’s good to die for our land.”

Another troubling aspect of the Bahloul affair is the lack of solidarity and dearth of empathy among the benches of the biggest party in the opposition, the Zionist Camp. How can one expect that those politicians who abandoned their party member to the incitement of the right wing would display solidarity for the plight of the neighbors — an entire nation living for decades under an occupying force, without any real hope of change? In his rejection of Bahloul, Zionist Camp leader Isaac Herzog makes one nostalgic for one of his predecessors, former Defense and Prime Minister Ehud Barak. In 1998, Barak, then-chairman of the Labor Party, said that if he were a Palestinian of the right age he might have joined a terror organization.

Responding to his critics in the Likud, the former chief-of-staff and the most decorated soldier of the Israel Defense Forces explained his remarks, saying, “What would they have wanted me to say, that if I were a young Palestinian who has from birth undergone a Palestinian experience, I would have become a third-grade teacher in an elementary school?” Sadly, two years later the gap between Barak's intellectual capacities and his emotional intelligence prevented him from displaying that same empathetic attitude toward PLO leader Yasser Arafat, then-chairman of the Palestinian Authority, in the doorway of the negotiating room at Camp David.

According to the equilibrium theory of Nobel Prize laureate in Economic Sciences John Nash, in order to achieve the best solution to a conflict it is essential to anticipate the moves of the other side. To that end one must first walk in its shoes, understand its interests and wonder about its feelings. To do so, there is no need to delve into the writings of the genius. All you have to do is log onto the website of Hadracha (Hebrew for “guidance”) and go to the section titled “Entering the shoes of the other.” The site is a joint initiative of the Zionist Federation and the national-religious Bnei Akiva youth movement designed for 10- to 14-year-olds. The text was written by a counselor in Bnei Akiva, one of the power bases of the radical right led by Education Minister Naftali Bennett.

The instructions there are for children to exchange their shoes with those of their friends and run a short way, in order to show them the difficulty of understanding others and the need to do so. The counselor is encouraged to end the exercise by telling the children the following important message: “We saw that it is not easy to enter someone else’s shoes, but we must always do so before passing judgment on a friend … Sometimes we don’t know what’s behind certain decisions or certain acts and we have to develop within ourselves a measure of seeing the good.” The counselor is encouraged to quote from the Jewish sages the words, “Judge every person favorably'' (Pirkei Avot 1:6).

Does the word “friend” apply also to a 12-year-old Palestinian girl sent to jail by a Jewish judge after a soldier found a knife in her bag? Do the words “every person” also apply to an Arab member of Knesset who displays empathy for his people under the yoke of occupation? Perhaps those shoes only belong to the feet of the Jews whose Sabbath prayer “You [God] have chosen us” guides them in choosing their leaders and shaping their views.