The Israeli public and its leaders are trapped in their thinking about who is a terrorist, and that bodes ill for peace. 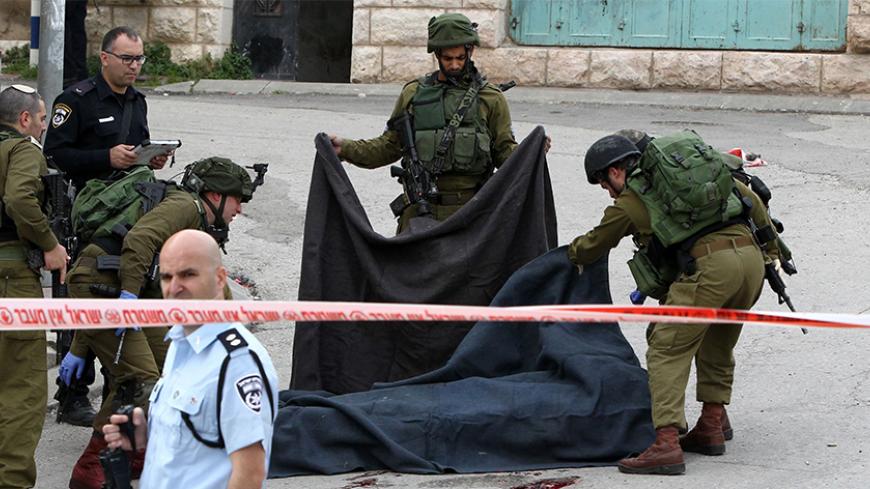 Israeli soldiers cover the body of a Palestinian assailant who was allegedly shot in the head by an Israeli soldier as he lay wounded on the ground at the entrance to the heavily guarded Jewish settler enclave of Tal Rumeda in the West Bank town of Hebron, March 24, 2016. - HAZEM BADER/AFP/Getty Images

About a year after being elected to the Knesset on the Zionist Camp list in March 2015, the popular sports announcer Zuhair Bahloul discovered that in the game of politics, there are many rivals and that someone who doesn’t play by the rules could find himself an outcast, even in his own party.

In an April 4 interview with radio station Darom, Bahloul refused to use the word “terrorist” in reference to the Palestinian assailant executed March 24 in Hebron by an Israeli soldier while lying neutralized on the ground after stabbing another soldier. In an interview with Army Radio on April 7, Bahloul tried to explain why he thinks that not every Palestinian assailant is a terrorist, stating, “Obviously, if he [the Palestinian] killed someone, then he is a murderer, but if we keep going back to the same terminology, how will we ever make peace? How will we instill peace between the Palestinians and us? Israelis believe that anyone who fights for his freedom and independence is a terrorist … [but] he is not a terrorist.”

Bahloul called the assailants “murderers,” and said they should be punished, but his refusal to call them “terrorists” led to accusations across wide swathes of Israeli society that he himself supported terrorism. One of the first to go on the attack against him was Prime Minister Benjamin Netanyahu, who described his remarks as “disgraceful.” That said, journalist Ronen Bergman of Yedioth Ahronoth checked and reported on April 11 that in his 1987 book “Terrorism: How the West Can Win,” ​Netanyahu distinguishes between terrorists, who attack civilians, and guerrillas, who attack military targets to achieve political aims. In the chapter “The Definition of Terrorism,” Netanyahu wrote that guerrilla fighters are the exact opposite of terrorists. He claimed that unlike guerrilla fighters, who go to battle against military forces, which in most cases are much stronger than they are, terrorists choose to attack civilians who are defenseless and weak.

Even members of Bahloul’s own party didn’t go easy on him. “The party's position stipulates that a terrorist is a terrorist is a terrorist. It does not matter if he sets out to kill Arabs or Jews,” said Zionist Camp Chairman Isaac Herzog, to clarify the party’s position. Other Knesset members from his party also condemned Bahloul, who thus found himself under attack from the left and the right. Zionist Camp Knesset member Eitan Cabel went so far as to say that Bahloul could no longer be a member of the party.

“I want to build bridges, not destroy them. I want to create a discourse with the Israelis and mainly want that others will listen to me as an Arab citizen of Israel,” Bahloul told my colleague Mazal Mualem in October 2015 during an interview with Al-Monitor. Given the storm now swirling around him, a perhaps naive Bahloul has discovered that most Israelis are not ready to listen to him.

The question of who is a terrorist has hovered over Israeli society ever since the signing of the Oslo Accord in 1993. At the time, Palestinian prisoners deemed bloodthirsty terrorists were suddenly released from Israeli prisons. At the same time, certain Palestinian groups — including Hamas (in 1989), Islamic Jihad (in 1990), the Popular Front for the Liberation of Palestine and the Democratic Front for the Liberation of Palestine (1986) and various Salafist groups — were declared terrorist organizations by the Israeli defense minister in accordance with Knesset legislation. The Fatah movement was considered a terrorist organization up until the signing of the Oslo Accord. During the second intifada (2000-2005), its Tanzim and Al-Aqsa Martyrs Brigades were declared unlawful organizations in accordance with Israeli defense regulations.

Hamas may well have become a political movement and its Izz ad-Din al-Qassam Brigades a uniformed army of recruits who train and operate according to standard military doctrines. Nevertheless, it has been unable to free itself from being branded a terrorist organization. As long as Hamas regards civilians as legitimate targets — in Operation Protective Edge in 2014, the al-Qassam Brigades fired rockets at civilian targets in Israel — the Israeli government will undoubtedly continue to designate Hamas as a terror organization.

According to the Hebrew-language Even-Shoshan Dictionary, “A terrorist is someone who acts on behalf of a hostile organization, engaging in sabotage and terror in order to achieve political or other objectives.” This is quite similar to the definition adopted by the European Union in 2001. Given this, how should the people whom Bahloul rightfully referred to as “assailants” be defined? What about the Palestinian youngsters who launched attacks during the recent wave of terrorism, young people unaffiliated with any group and who did not train day and night in underground situations? Are they really terrorists?

Whether someone is labeled a “terrorist,” a “murderer” or an “assailant” is more than just a matter of semantics. It has bearing on how Israel confronts the issue operationally. During the second intifada, when people associated with specific Palestinian terrorist groups conducted suicide attacks in Israel, the Israel Defense Forces’ (IDF) operational response was to launch military operations to shatter the terrorist infrastructure. Operation Defensive Shield in 2002 and other operations in the West Bank and Gaza Strip were intended to attack the terrorist organizations themselves and the underground cells that they had established throughout the territories. In the current round of violence, the third intifada, launching a military operation isn’t even on the table. After all, there is apparently no terrorist infrastructure, no terrorist organization and no underground cells.

As written in Al-Monitor on April 4, the way the IDF has acted to restore calm has yielded positive results, at least to date. Over the past few weeks alone, there has been a significant decline in the number of attacks in Israel, and it looks like the motivation to launch them has slackened as well. There are many reasons for this, including close cooperation between Israel and the Palestinian Authority.

One thing, however, is certain. If the IDF were forced today to contend with terrorists and terrorist organizations and infrastructures across the West Bank and Gaza, the policy of restraint that it has adopted over the past few months would not be useful. In fact, it would encourage more attacks. For the most part, however, the Israeli public remains trapped by the definitions used by so many politicians, from Netanyahu to opposition leader Herzog, so none of that seems to matter. As far as they are concerned, terrorists are terrorists, and anyone who thinks otherwise is a traitor who supports terrorism, even if that person is a beloved sportscaster like Zuhair Bahloul.