In an interview with Al-Monitor, Labor Party candidate Zuhair Bahloul calls upon the Arab parties to adopt a different strategy and demonstrate willingness to join a Labor-led coalition after the elections. 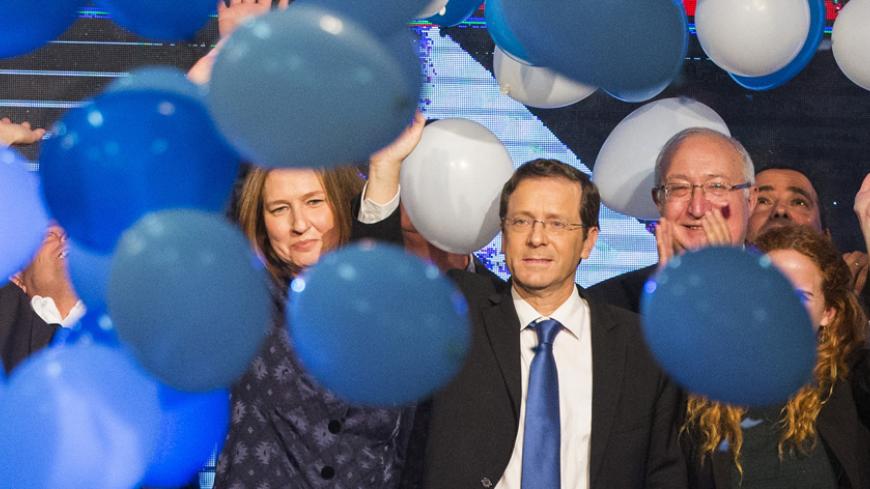 After being ranked 17th on the Labor Party’s slate, media personality Zuhair Bahloul’s life hasn’t been a stroll in the park. When his new party teamed up with Tzipi Livni’s Hatnua in December, he suddenly found himself a member of a united group labeling itself the “Zionist Camp,” of which Livni is co-chair. Yossi Sarid, the former chairman of the Meretz movement and current Haaretz columnist, described in an article the dilemma of an Arab who decides to bolster the “Israeliness” of Israel’s Arab citizens, only to find himself taking flak from all sides. Referencing Israel's national anthem, he wrote, “His soul, how odd, isn’t that of a 'yearning Jew.' And as a native, his eye doesn’t gaze 'toward the east.' The dogs of the right rushed to lunge at him and attack him for his dual loyalty — not to say his treacherousness.”

Well before announcing that he was running in the elections on the Labor Party’s slate, Bahloul presented before the Israeli public the sense of dead-end helplessness felt by Arab Israelis in the face of a Zionist society. “Oh! How difficult my life is. I’ve had enough. I’m really fed up with being an Arab in the Holy Land,” he wrote in Haaretz. “Holy, my foot! This land is not real. To survive in it, I need to acquire more and more skills — juggling and acrobatics, for example. Without those arts, who can dodge so many bullets, all of which amount to suspicions and accusations?”

Bahloul has enjoyed an illustrious career as a venerated sportscaster on the Israel Broadcasting Authority. Equipped with polished Hebrew, enthusiasm and professional knowledge, he drew many sports fans that saw him as integral to Israeli sports and a valuable asset to Israeli sportscasting. For the first time ever, following his transition to politics, strident voices have been raised against him from the Israeli right, questioning his loyalty to the state.

Bahloul managed to overcome his biggest hurdle to date when the Zionist Camp retracted its decision to vote in favor of disqualifying Knesset member Haneen Zoabi from serving in the next Knesset. Meanwhile, he was spared the dilemma that has been seriously troubling him in recent days and that has now become the dilemma of the Zionist Camp. In an interview with Al-Monitor, he says he feels very uneasy about this issue, yet at the same time he is resolved to serve as a bridge for Arab Israelis who want to feel part and parcel of Israeli society.

Bahloul:  I would have embraced a different course and a different discourse. I would not have espoused the antagonistic move vis-a-vis Israelis. I, on the other hand, would have promoted an environment of dialogue rather than alienation. Zoabi, by her own actions, created this alienation and in this regard I think she was wrong.

Al-Monitor:  As a beloved sportscaster admired by many generations, you are now getting a first taste of the bitter arrows of politics.

Bahloul:  I get ricochets from Arabs, too. But the fact that the Israeli right attacks me for things I said during the war in Gaza about indiscriminate killing and the fact that Arab Israelis also attack me for the so-called unwise move of joining this party — what this is all telling me is that I’m on the right track. I’m trying to serve as a broker for the two populations. I’m trying to bring a different intellect to the Labor Party. This is conducive to a feeling that I went for something that appears controversial, but it’s the right move because it represents both courage and integrity. I’m here to tell the Jews: Accept the Arabs and take them in. And to the Arabs, I’m saying: Let’s not pawn our lives by sitting on the sidelines. Instead, we should become an integral part of the decision-making apparatus.

Al-Monitor:  Many Arab Israelis still attribute the "original sin" to the Labor Party, blaming it for their current predicament. Back in the day, Prime Minister Ehud Barak asked Sephardic Israelis for forgiveness. Do you see your party asking forgiveness from the Arabs and bringing them closer to it?

Al-Monitor:  Given the current atmosphere in Israel, can you envision a scenario whereby if the Zionist Camp establishes the next government it will ask the members of the united Arab slate to be part of it?

Bahloul:  I think that the Arab parties in Israel are legitimate parties. The atmosphere is indeed harsh, which is the reason why I went into politics. The atmosphere has become racist and blustery, causing Arabs to feel ostracized, like pariahs. If I didn’t think that this party had the potential to set up a centrist-left government, with Arabs potentially joining the bloc, I don’t think I would have joined it wholeheartedly. Despite the atmosphere and even though the right dominates the collective thinking, the Labor Party needs to think that the Arab parties are legitimate even in the context of being an "obstructive" body [against a right-leaning coalition]. And maybe later I will be able to convince my party leaders to add them to the coalition. We are citizens. We haven’t compromised state security except for a few cases. Arab Israelis have an unabashed desire to fit in and be part of the state, so why should the Labor Party exclude them?

Al-Monitor:  Why didn’t you join an Arab party?

Bahloul:  I think that the strategy of the Arab parties is misguided. They sit on the sidelines and do not aspire — even as a declarative move — to be part of the democratic process. Currently, there are 11 Knesset members. Even if the unification produces 13 seats, unless their strategy changes, they will remain on the sidelines instead of taking part in Israel’s political life. That is why I don’t want to adopt the same tools from 40 or 50 years ago of the Arab parties, namely sitting on the sideline and being part of a forsaken opposition.

Al-Monitor:  But so far, the polls indicate that the Zionist Camp isn’t picking up momentum.

Bahloul:  Come check the numbers in the final month. We still haven’t reached the final lap. We have quite a few plans up our sleeve.