Talking to Al-Monitor, Israeli Arab Knesset member Zouheir Bahloul argues that Israeli Arabs might hate the prime minister, oppose his policy or identify with enemies of the state, but they won't cross the red line of hurting Israel's security. 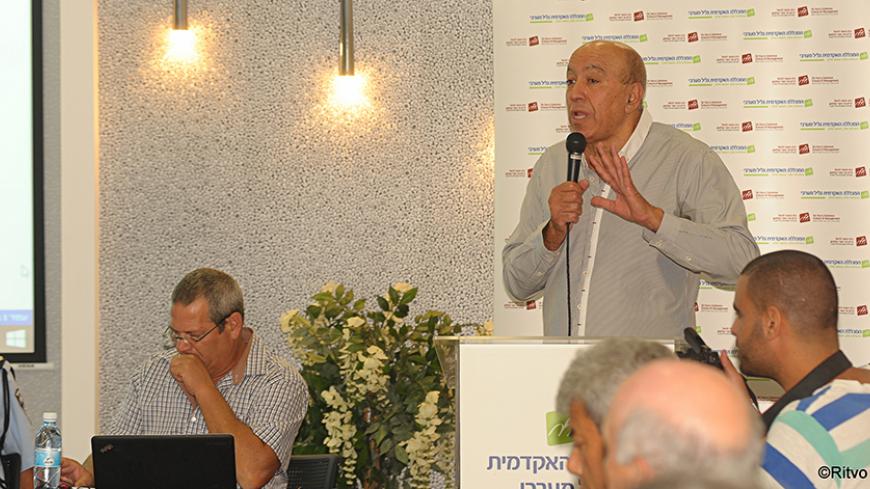 On Oct. 19, Bahloul woke up to the terrible news that an Israeli citizen, a 21-year-old Bedouin from the Hura village, was the perpetrator of the attack the previous evening at Beersheba’s central bus station. He told Al-Monitor, “When I learned that the terrorist was from Hura, I shuddered. I couldn’t function, I didn’t go to Jerusalem. I couldn’t believe it. On the other hand, I know that the present climate is conducive to bad seeds flowering. Israeli Arabs have red lines in their justified struggle. People shouldn’t make generalizations.”

Bahloul was born in Acre. Before engaging in politics, he was a respected and popular sports broadcaster and commentator who also presented political current events programs in Israel’s established media. During the last election campaign — when the Arab parties were forced to unite, due to the rise in the electoral threshold — he got involved in politics through a mainstream party. Bahloul and Arab Knesset member Issawi Freij of the Meretz Party found themselves in the minority: They were Arab Knesset members operating out of Zionist parties, and not in the Joint List of predominantly Arab parties. Now at the height of the storm, Bahloul is convinced that he made the right decision and that the majority of the Arab public prefers the path that he decided to take.

Al-Monitor:  The Arab Knesset members of the Joint List are leading the public media discourse in a very inflamed, fiery direction. How do you feel about that?

Bahloul:  I don’t want to be the Joint List’s defense attorney, but you can’t say that they are Jew-haters or spies or a fifth column in the Knesset. However, when I decided to go into politics, I joined a typical Israeli party and not a clearly Arab party. I want to be legitimate in the inner Israeli discourse that operates without angry tones and raised voices, because I’m sick and tired of this stuff. I also think that most of the Arab public wants to create a new discourse with the Israeli public. So while it’s true that the Joint List's [election] achievement is unprecedented, that is mainly because the Arab dream of going to the elections as one united bloc has finally been realized.

There are quite a few polls I rely on that lead me to the conclusion that my course of action is the real, genuine one. I want to build bridges, not destroy them. I want to create a discourse with the Israelis and mainly want that others will listen to me as an Arab citizen of Israel.

I will never forfeit my right to struggle and fight for the rights of the Arab minority in Israel, as a Knesset member and even before that, as someone who works in the media. This is a serious, social and democratic battle that should be conducted fearlessly, even if it annoys large swathes of the Israeli public. If we limit the struggle to the civil and political realms, the Israeli public could lend [us] a hand and understand our trials and tribulations.

At the same time, the national sphere is very legitimate and important. At the beginning of my [political] career, I went to Ramallah and met with the official representatives of the [Palestinian] Authority. President Mahmoud Abbas, who knew I was there, invited me to a meeting. But if I spend all my time talking only about the Palestinian issue and not the civil one, I won’t find many partners in the State of Israel. It is my duty as a politician to valiantly oppose populism, as if the national issue is the only discourse. That’s not the case. The civil discourse is no less important than the national one. Israel has a center and left that can combine with us in a civil struggle.

Al-Monitor:  What do you think about the media-covered feud between Knesset member [and Joint List leader] Ayman Odeh and Nazareth Mayor Ali Salam [in regard to the ramification of the current situation over Jewish-Arab relations]?

Bahloul:  I didn’t like the style, but I liked the debate. This discourse is very important, even if it wasn't conducted in the spirit of [late Israeli etiquette guru] Hana Bavli. It was important to activate the discussion within the Arab minority in Israel. Although the Jews loved this split, naturally, and completely identified with Ali Salam, its importance is internal [within the Arab sector]. For years and years, no discourse has been conducted within the Arab minority that emphasizes what is supposed to appear on its public agenda. This confrontation showed that the Arab sector is not one homogenous, herd-like minority. The Arab minority is pluralistic and diverse, although it always tried to appear homogenous vis-a-vis the Israeli public, which is a mistake.

I used to be a consensus person, a soccer broadcaster; the Jews loved [it]. When I used to appear in important, ideological-political programs, the Jewish and Arab public loved me. I was part of the consensus. When I went into politics, I knew in advance that I was headed in a different direction, and I did get hit over the head for it.

Al-Monitor:  Do you think that the Arab-Israeli public is becoming radicalized?

Bahloul:  I actually think that there is a tendency toward moderation among the Arab public. In a poll taken just before the elections, 60% of the interviewees said that they hoped and prayed that the Joint List would be part of the coalition. That is significant because it shows that while the Arab-Israeli public’s dream came true in regard to the unification of all the Arab parties, at the same time the public requests from the Joint List members to be Israelis, too, not only Palestinians and Arabs.

We have quite a few youths who want to join high-tech companies and the public service, who want to live in Tel Aviv and not languish in the periphery. I think that Ayman Odeh, after he was elected as the head of the [Joint] List, also wanted to join the path that Issawi and I took. But due to opposing streams within the [Joint] List, Odeh was stymied, against his will.

I still believe that Ayman Odeh believes in this course of action, because a political leader knows how to feel the public pulse. The Arab public wants to maintain its status as a national minority — there’s no argument about that. On the other hand, they also want to naturalize life here.

At the height of the tempest in recent weeks, several meetings have been held with Jewish and Arab heads of municipalities. Leaders of both sides participated and this was not done secretly. This in my opinion is the central theme of Israeli Arabs. Why isn’t it expressed? Because the media does not like to emphasize positive, mainstream stuff. Instead the media is interested in the one who shouts in the Knesset or the one who makes a defiant appearance on Al-Aqsa [Mosque]. I call on my public to cooperate with the Israelis and wage an incisive debate only with regard to the government's policy.

Therefore I’m convinced that in the next elections, after the enthusiasm for the Joint List has died down, the voting trend of the Arab public will move toward the mainstream parties.

Al-Monitor:  When Israeli Arabs take more and more part in terror attacks, you don’t think that that testifies to radicalization?

Bahloul:  No, 99% of the Arab civilians in Israel have never ever harmed the state. That is an impassable red line among us. There is no sane Arab-Israeli person who wants to cross that line. Everything [else] is permissible — to hate [Prime Minister] Benjamin Netanyahu or verbally attack Israel, but not to cross that red line. Recently there have been several Israeli Arabs who flew to Turkey to join the Islamic State there, but they did not operate against the state’s security from here because they knew that that is a red line. You have to appreciate the Arab citizens of the state because they are the most obedient, compliant civic minority in the world. The Arabs have a lot of reasons to feel uncomfortable, but on this issue, the Arabs are united — not to harm the country's security.

Al-Monitor:  What bothers you the most now?

Bahloul:  What bothers me the most is that in spite of the exemplary behavior and conduct of Israeli Arabs, the moment any kind of confrontation comes up, the Jewish population starts to punish the Arab public with boycotts. Israel is even fighting boycotts from abroad, and suddenly [Jews] aren’t going into [Arab] stores and are boycotting us as if we were enemies of Israel. We are not. We are part and parcel of the state and of this enterprise here — of shared lives. Don’t punish us every time something happens.