Hamas finds itself between a rock and a hard place

Hamas seems likely to accept Egypt’s demand that it sever ties with the Egyptian Muslim Brotherhood, even though the relationship formed the basis for its ideology. 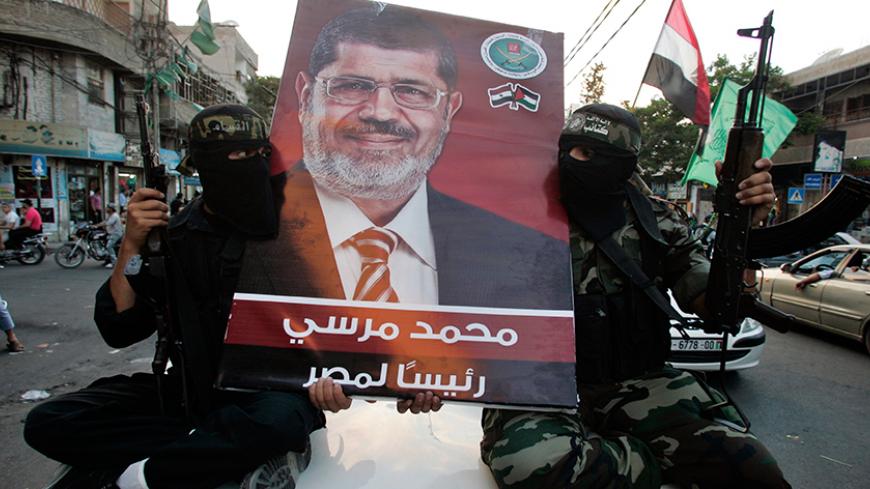 Hamas militants hold a poster depicting Mohammed Morsi of the Muslim Brotherhood as they celebrate in the streets of Gaza City after he was declared Egypt's first democratic president, June 24, 2012. - REUTERS/Mohammed Salem

The leaders of Hamas never imagined that they would be pushed up against the wall like this. With Egypt holding a gun to their heads, they know that if they want to keep the movement alive, they must accept Egypt's ultimatum and sever ties with the Muslim Brotherhood. It could be the toughest decision that Hamas has been forced to make since it was first founded in December 1987.

It is well-known that the founder of Hamas, Sheikh Ahmed Yassin, was inspired by the Muslim Brotherhood while he was a student at Ain Shams University in Egypt. He adopted and adapted that group’s teachings to meet his own ideology and turned Hamas into a mass movement of the poor and disenfranchised members of Palestinian society.

In March, a senior Hamas delegation traveled to Egypt. Led by Mahmoud al-Zahar, the group also included Mousa Abu Marzouk, Imad al-Alami and Khalil al-Hayya. The background for the visit was the assassination of Egyptian Prosecutor General Hisham Barakat, a crime attributed to Hamas. Among other things, Egypt demanded that Hamas sever all ties with the Muslim Brotherhood. The Hamas delegation seems likely to accept Egypt’s demands, because they have already shown that they want Hamas to survive as a movement. Throughout its existence, Hamas has been forced to compromise, round its sharp corners and blur its ideological boundaries when they become serious obstacles.

That is what Hamas did, for example, after Israel assassinated the movement’s top leaders — Yassin and Abdel-Aziz al-Rantissi in 2004. To survive, the movement decided to stop its campaign of suicide bombings in Israel and adopted a new course. Hamas became a political movement, while its militia, the Izz ad-Din al-Qassam Brigades, became an army.

After each of three Israeli military operations (Cast Lead, Pillar of Defense and Protective Edge), which rained destruction on Gaza and threatened the hegemony of Hamas throughout the Gaza Strip, Hamas was forced to accept a cease-fire, even though it ran counter to the ideology it had advocated for many years of an uncompromising jihad against Israel.

The bitter reality facing Hamas has always been much stronger than the uncompromising ideology that Yassin advocated. It always seemed to obligate his successors to adopt a more moderate course of action. On each occasion, the movement’s new leaders were forced to seek out ideological justifications to explain their decisions, which ran counter to everything they had advocated in the past. To their credit, it is worth noting that they have always been able to get out of their binds in rather sophisticated ways. They would frequently espouse slogans like “The Palestinian interest demands compromise.”

During the second intifada, when Yassin agreed to a cease-fire with Israel, he explained that when the enemy is too strong to defeat, it is necessary to take a break to recover and build up strength. Hamas is now weak, while its enemies are stronger and more numerous.

With Israel and Egypt closing in on Gaza from every side, there is no way for even the most ardent religious believers to insist that the crisis Hamas is facing will soon pass. This time, however, Hamas will find it hard to explain to its supporters why it is folding up its central ideological banner after waving it proudly for almost three decades, and why the way of the Muslim Brotherhood is no longer the way of Hamas.

How will Hamas explain that it is turning its back on the movement’s founders?

When the Hamas delegation arrived in Egypt, Zahar attempted to counter Egyptian claims that Hamas members were connected to the wave of terrorism in Sinai. He was even interviewed on Egyptian television in his effort to win Egyptian public support by asserting that Hamas was facing false accusations. It looks like the interview had little impact. Al-Monitor contributor Ali Hashem listed the operational demands that Egypt made to Zahar and the other members of the Hamas delegation as a precondition for enabling the Hamas leaders to continue governing in Gaza. They included reconciliation with Fatah and the restoration of affairs in Gaza to the way they were before the June 2007 coup.

According to one senior Palestinian source, the Egyptians made it quite clear that there would be progress and no easing of restrictions on the Egyptian side if Hamas refuses to accept one major condition: It would have to cut all ties with the Muslim Brotherhood and publicly announce that it had done so.

Hamas is now facing its moment of truth. It is no exaggeration to say that its leaders are being forced to choose between life and death. While the only body authorized to make such a decision is the movement’s worldwide Shura Council, it stands to reason that it will acquiesce and even find justifications for the decision by saying, for instance, that the decision is in the Palestinians’ best interests.

At this point, it remains unclear how such a decision would impact Hamas and how the movement would go about explaining it to the Palestinian people. After all, modern Palestinian history has always revolved around the Hamas-Fatah-Muslim Brotherhood axis.

Hamas is caught between the proverbial “rock” (Israel) and “hard place” (Egypt). It looks like it is being drained of the very ideological and operative assets that made it what it is today. Hamas once declared a war to the death against Israel, but the movement has transformed considerably since then. It has been forced to lower its weapons and the banner of jihad and commit to maintaining its cease-fire with Israel. And it is now being forced to part with the ideological basis of its charter.

This is no longer a question of compromise. It is, undoubtedly, a complete surrender.