Traditional henna tattooing has resurfaced among women in the Gaza Strip as a potential source of living. 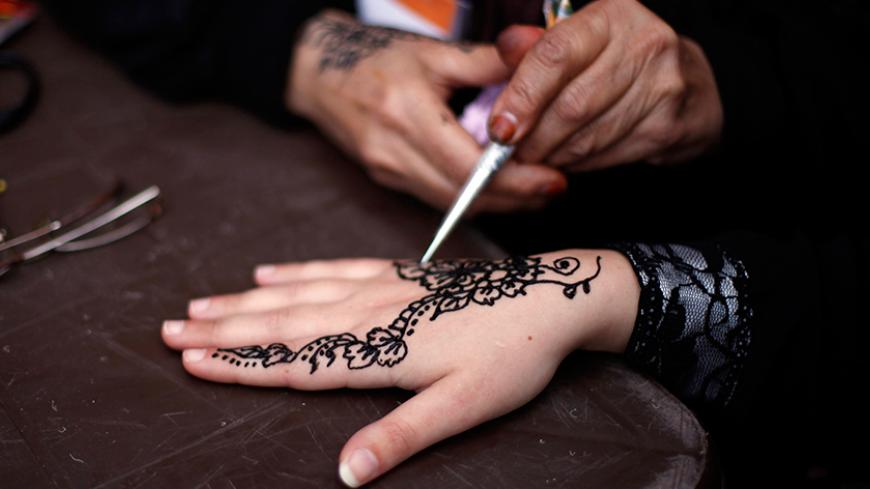 A Palestinian bride has her hand decorated with a traditional henna design in Khan Yunis in the southern Gaza Strip, Nov. 27, 2013. - REUTERS/Ibraheem Abu Mustafa

GAZA CITY, Gaza Strip — The tradition of henna body painting has resurfaced among Palestinian women who paint their bodies and feet for ornamental purposes. This tradition vanished in the past decades, but it is gaining popularity again and has become a source of living for many women who help to make ends meet amid the deteriorating living conditions in the Gaza Strip.

Henna is a powder made out of henna tree leaves. It is sold in local perfume stores and can be prepared at home by crushing henna leaves and mixing them with water, then adding dyes to give them color. Women paint beautiful shapes on their hands and feet with henna, and the designs last for a couple of months before disappearing.

According to historian Naser al-Yafawi, henna painting is part of Palestinian heritage, and it was first used by the Phoenicians in the Levant in 1500 B.C., especially in Lebanon and Palestine. They colored the henna magenta to give it a nice color. The tradition then spread among Egyptians and other civilizations. Yafawi told Al-Monitor, “Phoenicians tattooed their hands and faces with henna as part of pagan rituals. When people died, their palms were painted with henna before the burial. Later on henna became a part of women’s ornamentation.”

Yafawi said that henna tattooing has always been part of traditional rituals for Palestinian weddings. The bride’s hands and feet are painted with henna to resemble a mural on the night before her wedding in what is called “henna night.”

On her henna night on April 2, bride Mona Jaoude, 18, had a woman tattoo her body and feet with roses, butterflies and tree branches with henna. Upon seeing this, the other ladies were excited to have their own henna drawings.

Jaoude told Al-Monitor, “Henna painting is considered part of our unforgettable customs. However, it is not limited to brides, as other girls can get their own henna tattoos. But when it comes to the bride, the advantage is the painting space, as the henna drawings can stretch from her palms to her shoulders and from her feet to her knees.”

Henna painting is also part of the groom’s celebration rituals, but in a different way. According to tradition, the groom dips his right hand in henna on his bachelor night, which precedes the wedding night and is equivalent to the bride’s henna night. This ritual distinguishes the groom from the other men, but beautiful shapes are not drawn on his body because they are considered feminine.

Henna painting has become a largely needed skill in Gaza because few people have mastered it. Meanwhile, women increasingly want henna drawings on their hands and feet, even without an occasion. This has pushed some women to master the skill and use it as a source of income.

Faiza Ahmad, who is skilled in henna painting, said that more women are demanding henna painting on their hands and feet to give them a beautiful look.

Ahmad told Al-Monitor, “Henna painting has become a source of living for me. It provides me with a monthly income that reaches $150 on average. One henna drawing ranges from 5 to 20 shekels [$1.30-$5.30].” She noted that demand for henna painting increases in spring and summer, as weddings and occasions abound during that time of the year. The henna lasts for about two months.

How is henna prepared for painting? Ahmad answered, “The henna powder is mixed with oils to become smooth. Then it is mixed with black or red dyes. Old women are a fan of the red color, while young ladies opt for black because they find red old-fashioned and not in line with the trending fashion. After dyeing, the henna is put in a special syringe and is ready for painting.”

Ahmad welcomes customers at her house in Gaza City because renting a place is costly. She also visits the customers’ homes upon their demand.

Other women found Facebook a suitable space to promote their work and attract customers looking for henna painting. Fidaa Natshe, known as Umm Amid, created her own Facebook page and called it “The newest Henna trends for brides — Umm Amid.” The page has 3,500 followers.

Natshe told Al-Monitor, “I have mastered henna painting for years, but I have few customers. When I created a Facebook page to promote my work and skills, my customers increased in number.” She noted that she had two or three customers per day on average, but after creating a Facebook page, this number has reached seven.

Henna is not only used for ornamentation in Gaza. It is also used as medicine for problems that women suffer from. Alaa Ayech, manager of Al-Salam Herbal Stores, told Al-Monitor, “In addition to ornamentation, henna is used to treat hair [loss] and weakness of the hair lock. Henna powder is mixed with lukewarm water and is left for three hours to ferment. Then it is applied to the hair for two to three hours. It is also used to kill fungi that appear on the cracks of the feet.”

Ayech noted that local henna is not the best. Sudanese, Yemeni and Indian henna are better because they grow in a warmer climate. All types are available in local markets for customers and are exported from the countries of origin without any obstacles.

Despite the popularity of henna painting among women in the Gaza Strip, it is still considered a domestic profession because women find it hard to launch their projects or open beauty parlors due to lack of capital and the tough economic conditions.