Iranian officials are actively trying to stem the appeal of tattooing, which is illegal but increasingly popular among youths. 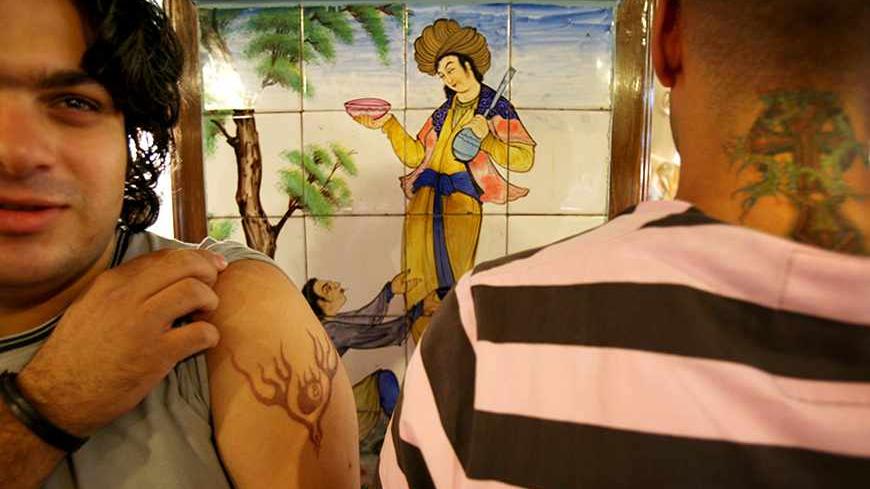 Two men display tattoos on their arm and neck while standing in front of an Iranian painting at a shopping center in northern Tehran, Sept. 21, 2006. - REUTERS/Morteza Nikoubazl

Studies of the remains of ancient Iranians reveal that many people had tattoos. In the past century, a number of Iranians got tattoos, most of them with some sort of significance attached. For example, women generally got tattoos because it was believed that they made them more attractive. They preferred images of birds, berry bushes or trees below the neck to make themselves prettier, or flower bushes on a breast or under the navel to supposedly boost sex appeal. Some women believed that tattoos would protect them from the evil eye. Men admired for their strength and masculinity usually had tattoos, typically consisting of images or a verse of a poem symbolizing their power or praising their mother.

In recent years, tattooing has become increasingly popular among youths, in particular among females. A little more than 20 years ago, Iranian women began getting tattoos as permanent makeup, which sometimes gets them in trouble because women need approval from guards to enter government buildings, which means they cannot show hair or wear makeup. If a woman has tattooed eyebrows or a permanent lip liner, she would have to demonstrate to the guards that no matter how much she rubs her face or lips with the tissues they have provided, the makeup will not come off.

The average price of a small tattoo on an arm, foot or leg is roughly equal to $100. The average cost of tattooing a medium-sized man’s entire body is around $3,000. A medium-sized Iranian male is about 172 centimeters tall.

Most tattoo artists give their clients two options for ink: regular or American. The American ink increases the cost of the tattoo.

Tattoo artist Pari works in four different salons in Tehran. She told Al-Monitor that she travels to Babol, in the north, once every two months to do tattoos. Babol is her hometown, so she knows plenty of people there who find customers for her. She says she makes a decent income and gets by just fine as a tattoo artist.

Giving and getting tattoos are illegal in Iran. Apparently, what upsets the authorities perhaps even more than the notion of getting a tattoo is that female tattoo artists outnumber men, and not all of their customers are women.

Since tattooing is an underground business, there are more and greater risks associated with malpractice in Iran compared to in countries where it is a profession pretty much like any other. Due to the high number of infections related to tattoos, the Ministry of Health issued a warning asking people to refrain from getting them in beauty parlors and linking tattoos to higher risk for skin cancer, hepatitis and AIDS, adding that getting a tattoo increases ones chance of getting hepatitis C by 10.

The Higher Council on Health, which falls under the Ministry of Health, has announced that its members are to hold a meeting with a group of government and Islamic Republic of Iran broadcasting officials, during which a list of activities and practices are to be banned. Tattooing and permanent makeup are on the list. Since tattooing is already forbidden and is done secretly, this may be redundant, but at the same time points toward an increase on pressure to enforce the ban.

Many Iranian "thugs" have tattooed bodies, a negative aspect that the government takes advantage of to discourage it. That tattooing has become part of their subculture lends it negative connotations. The police force has in recent years paraded these alleged thugs before the public, mostly in southern Tehran, to belittle them and send a message to onlookers — “Let this be a lesson to you.” Many of them have committed petty crimes or have intimidated their neighbors. In some cases, their tattoos have been pinpointed as part of this “lesson.”

Despite such government efforts at public shaming, tattooing has not fallen out of favor. Raha, a student of electrical engineering in Yazd, revealed to Al-Monitor that she got all three of her tattoos during trips to Tehran to visit her relatives. She says her family has no idea that she has them, adding, “My brothers would kill me if they find out.”

A popular theme among young women is the animal of the year according to the Chinese calendar. Azita, a homemaker, told Al-Monitor that she has no remorse about getting a lizard near her ankle, but her husband makes fun of the fact that there will not be another year of the lizard anytime soon.

Iran’s soccer federation prohibits tattoos. Alireza Alipour, a cleric who heads the discipline committee of Iran’s soccer federation, has recently warned players that getting tattoos is “against norms and a serious violation of rules.” Alipour has asked that anyone who notices “overlooked cases” report them to him or his staff.

One example of a tattoo-related controversy is the much talked about case of Ashkan Dejagah, an Iranian-German player on Iran’s national soccer team. Since he has tattoos on his arms, he must wear long sleeves to conceal the images. That said, he has participated in a few matches without wearing long sleeves, showing off his tattoos. Some say that he gets more wiggle room in summer.

Getting full body tattoos, although quite uncommon, is sometimes done in Iran. Tattoo artist Mohsen, who says he has been trained by the “best in the business,” told Al-Monitor that he has applied whole-body tattoos to three men in the past year. He added, “I don’t think a woman would want to have tattoos all over her body. I’ve never heard of that.” There are indeed, however, some women who would want tattoos all over their body, mostly for showing off at the beach or poolside on leisure visits to neighboring countries such as Turkey and the United Arab Emirates.

Getting a tattoo in Iran can be costly since it is an underground activity. Both Pari and Mohsen said that the cost of getting a tattoo depends in part, as noted above, on the part of the body on which the tattoo is applied. Some areas of the body are far more sensitive than arms, legs or feet, so it would cost more to get tattoos on those places. Mohsen said that a very small tattoo on the breast or stomach would cost the same as a big tattoo on the arm.

A simple, unfiltered online search reveals a large number of options for tattoos, generally in Tehran, along with their cost. A few conservative Iranian websites have charged that the quotes are “ridiculously high,” adding that tattooing is a foolish act. Given the exposure many Iranian youths have to US and European figures, among whom tattoos are generally accepted, it seems conservative protests against the trend will be ignored.