Tattoo artists work to stamp out social stereotypes in Egypt

While many Muslims consider tattoos to be impermissible under Islamic law, the art is thriving in Egypt. 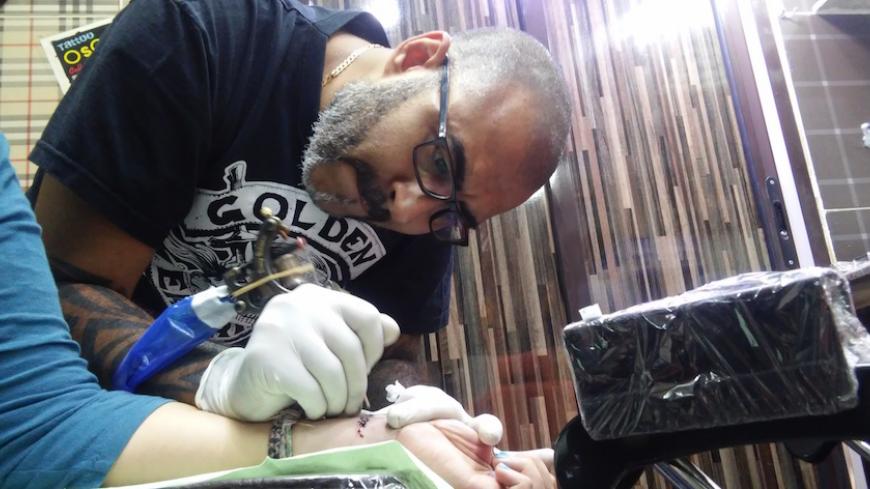 In an alley in Cairo’s populous Shubra neighborhood, tattoo artist Osama Ayoub challenges stereotypes by inking people’s bodies in a conservative and religious society that considers body art a taboo.

“Despite social pressure and deeply rooted traditional ideas, I have been running a very successful business so far,” Ayoub told Al-Monitor while tattooing a young woman. “The art is getting more and more popular here,” he added.

Ayoub, who has been tattooing for about 20 years, said he gets two customers every day on average. “Egyptians love art, and tattoos have a very unique artistic side,” the veteran tattoo artist added.

Ayoub, nicknamed “Osos,” was originally a barber. He was working at a barber's shop in Shubra while studying commerce at the same time. Then, he traveled to the United States where he learned tattooing. “I have been lucky to work with many professional tattoo artists who taught me the secret of the practice,” he said.

After learning the basics of the body art, Ayoub returned to Egypt where he started practicing tattooing. “First, I began working in Sharm el-Sheikh and Hurghada. But after the revolution, the number of tourists dwindled. So I came back to Shubra,” he said.

Although Shubra is not an upscale district and tattooing was not popular at the time across Egypt, Ayoub won widespread popularity. “I have gained customers from most segments of the society — young and old, rich and people from the middle class, men and women, Muslims and Christians," said Ayoub.

“I have also many customers from several countries all over the world. They come to Egypt to get tattoos as souvenirs and reminders of their journey in the country,” he added.

Many Muslims consider tattoos to be impermissible under Islamic law. Coptic Christians, meanwhile, who make up about 10% of the country's population, have long been practicing the art.

At Christian festivals, it is common to see tattoo artists inscribing crosses on the wrists of babies or images of saints on the arms of young men.

Al-Azhar, the highest seat of Sunni Islamic learning, says that tattoos are forbidden in Islam and those people who get tattoos are cursed by God.

Ayoub said that most of those who get inked love to feel different. “They love something or someone and they want it on their bodies. This can be a girlfriend or a boyfriend, a wife or a husband, a zodiac sign, among others. These things make him or her feel unique,” he explained.

Other customers usually love to get inked as a kind of psychological and physical treatment. “It is not just a tattoo,” Maryam Bolas, a 25-year-old woman who got her first tattoo a few days ago, told Al Monitor. “It is a kind of relief and cure,” she added.

Bolas said she has been suffering from acute depression for several years but has now gotten through it. She believes that inking the tattoo of “Warrior” on her wrist will always remind her of her perseverance and get her out of any future depression. “I think that it will give me a push to keep up with my life,” she said.

Although her parents did not accept her getting inked, Maryam was determined to have that tattoo. “It is my desire and my decision. And I think that I am adult enough to decide for myself,” she said. “That tattoo will breathe life back into me,” she added.

A young, veiled woman, who spoke on condition of anonymity, said she has not told her parents about the hidden tattoo she has had above her breast for years because she is afraid of them. “Of course, I have not told. If I told them, they would have killed me,” she told Al-Monitor.

In Egypt, many people prefer to get their tattoos in areas where they can be hidden with clothes.

The veiled woman said she got inked because the tattoo gives her positive energy and power to get over all obstacles. “I have also been through very hard times, and the tattoo helps me not to [go] back to these times,” she added.

Mohab, another young tattoo lover, said he likes tattoos because they represent a distinguished kind of art. “I am so fond of any art. I love the ink, the pain and the noisy sound of the tattoo gun and how it draws things that I love on my body,” he added.

Antoan, a Jordanian tattoo artist who refused to disclose his last name, said that tattoo artists in Egypt, however, face many challenges working openly in such a conservative society and also amid government bureaucracy.

Tattoo shops are loosely regulated in Egypt and mostly performed by artists using licenses for beauty parlors and barbers.

“We struggle here. Actually, we have been through many ups and downs. I think that tattoo artists across the conservative Middle East region are struggling. But I believe that such a struggle and these obstacles push us to work harder to pursue our passion,” Antoan, who is sharing a tattoo shop in Cairo, said.

Antoan added that it would take years for people to accept the art of tattoos in a country like Egypt. “But it will happen one day. From the time of the pharaohs, Egyptians have always been known for loving art, and tattooing can be found in Egyptian ancient history,” he added.

Examples of Egyptian tattoos date back to the Middle Kingdom (about 2000 B.C.). Several tattooed mummies of women were found at Deir el-Bahari, which is a complex of mortuary temples and tombs located on the west bank of the Nile, opposite the city of Luxor.

The markings mainly consist of dots and dashes, often grouped into geometrical patterns such as lozenges, and are usually placed on the chest, the abdomen, the arms or the legs.