Is Hamas open to direct negotiations with Israel?

Hamas leaders say the movement is not against negotiating directly with Israel, but is wary given Israel's failure to abide by its previous agreements with the Palestinians. 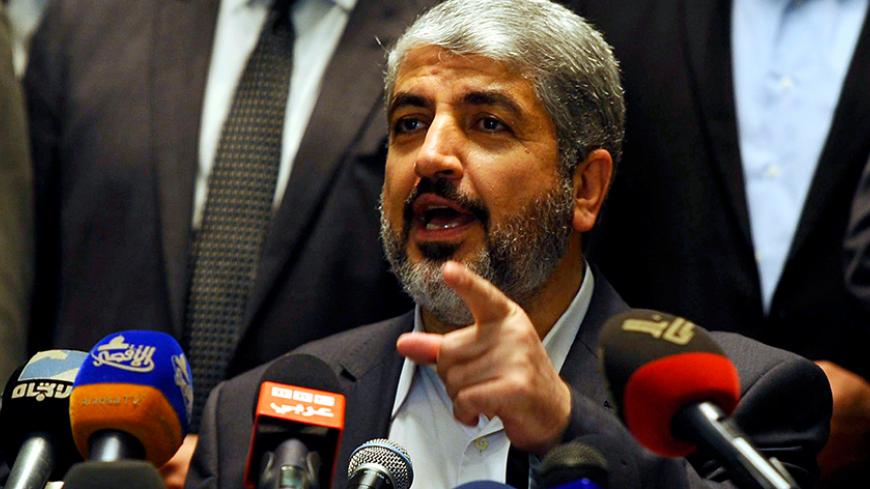 GAZA CITY — Amid the difficult political and financial situation facing Hamas, voices began to emerge within the movement in May 2015, calling for direct negotiations with Israel to avoid conditions being set by middlemen and the latter’s inability to compel Israel to abide by any agreement.

Hamas does not object to direct negotiations with Israel from a religious or ideological point of view. Inside Israeli prisons, long-standing negotiations have been undertaken between Palestinian prisoners and the Israeli Prison Service. These are ongoing on a daily basis to secure the rights of prisoners to education, medical treatment and visits by families and to calm tensions.

Tawfiq Abu Naim — director general of Gaza's security apparatus and a former member of the High Commission of Hamas Prisoners while jailed in Israel — was released in the 2011 exchange for the Israeli soldier Gilad Shalit. He told Al-Monitor, “We negotiated with the Prison Service for many years, and we do not have qualms about conducting direct negotiations with Israel on matters that affect the lives of citizens. Regarding political negotiations, on the other hand, Israel’s demands have a very high price. Israel wants to be recognized as a state, to have security coordination, to maintain its control over the crossings and preserve [the Palestinians’] economic dependency. Yet, we will not pay any price, due to the previous experiment in which Israel failed to abide by the agreements reached with the PLO.” One such agreement is the 1994 Paris Protocol.

Hamas and Israel had reached an agreement in October 2011 through Egyptian-mediated negotiations for Shalit's release in return for 1,027 Palestinian prisoners being freed. The negotiations took place in two separate rooms, with each party occupying one and Egyptian intelligence chief Raafat Shehata shuttling between them to convey demands and replies.

Ahmed Yousef, who along with fellow Hamas Shura Council member Ghazi Hamad advocates direct talks with Israel, told Al-Monitor that the head of Israeli Prime Minister Benjamin Netanyahu's office had initiated direct communications with Hamas’ leadership following the war on Gaza in summer 2014 to open a direct hotline for talks aimed at avoiding future wars. Yousef said, “For the first time ever, Hamas demonstrated flexibility in dealing with these contacts, on the condition that it be made public, though it remained skeptical about the seriousness of any direct negotiations in light of the current balance of power.”

Mohamad Hamadeh is another prisoner freed in the Shalit deal and a researcher at the As-Salam Center, which follows Israeli media. He told Al-Monitor, “Hamas still does not have enough political experience after its direct negotiations with Israel on daily Palestinian issues — such as electricity and the crossings — without a mediator. The idea of negotiations has its supporters and continues to be floated behind the scenes. The last war on Gaza in 2014 was a golden opportunity to begin direct talks to lift the siege and agree on a long-term truce. Yet, Hamas was wary about Israel’s failure to abide by previous agreements entered into with the Palestine Liberation Organization throughout the years.”

Hamas members negotiate with Israel on a daily basis on local issues through representatives affiliated with the Ramallah government's ministries in Gaza. The issues primarily revolve around agriculture and fisheries.

Tallouli told Al-Monitor, “We agreed [on April 3] with the Israelis to expand the fishing zone to nine miles for a two-month trial period in a geographical area that lies in the Gaza Strip’s territorial waters. … Coordination will be initiated with Hamas’ naval police to inform them about any trespasses by Palestinian fishermen.”

Bassem Naim, head of Hamas’ international relations, told Al-Monitor, “We have no problem dealing with the Israeli occupation in matters that affect the lives of citizens, such as medical treatment and border crossings. The problem lies in political negotiations. Through Egyptian mediation, we conducted bold and successful negotiations to free Shalit. But during the last war, Turkish-Qatari-French-mediated negotiations under the United States’ auspices failed to secure an early cease-fire. I believe that in light of regional developments, direct negotiations would be futile considering that the Israelis are reneging on and failing to abide by past agreements.”

Naim further stated, “We announced our acceptance of a state along the ’67 borders, but Israel is not interested in achieving peace in the region, and the international community is not pressuring Tel Aviv to accept that option.”

In a March 16 interview with France 24, Hamas political bureau head Khaled Meshaal reiterated Hamas’ acceptance of a Palestinian state along the 1967 borders. He also said, “As a part of the National Agreement signed in 2006, we, as Palestinians, agreed on a common national political program predicated on the right of the Palestinian people to self-determination, the end of the occupation, the withdrawal of Israel from Jerusalem, the West Bank and the Gaza Strip, the establishment of a Palestinian state with Jerusalem as its capital and the right of return. The Arabs endorsed that agreement, but Israel thwarted these efforts many years ago. The project remains in place, but maybe soon — out of desperation about international will in that regard, and out of despair about achieving palpable developments in favor of the Palestinian people — that solution might be withdrawn, with Israel bearing the responsibility for it.”

For now, given the recent discovery of new tunnels into Israel from Gaza, perhaps the Israelis will seek direct negotiations with the movement in order to reach a political and military truce with the hope of guaranteeing that Hamas stops rearming and digging tunnels and to avoid a new military confrontation. Failing in that, Hamas might agree once again to negotiate with Israel through a mediator, but one that could guarantee the parties’ commitment to any agreement.