Is Egypt the key to a Hamas, Fatah reconciliation?

Although optimism prevails in Hamas and Fatah circles, many observers believe no reconciliation agreement can be expected without Egyptian sponsorship. 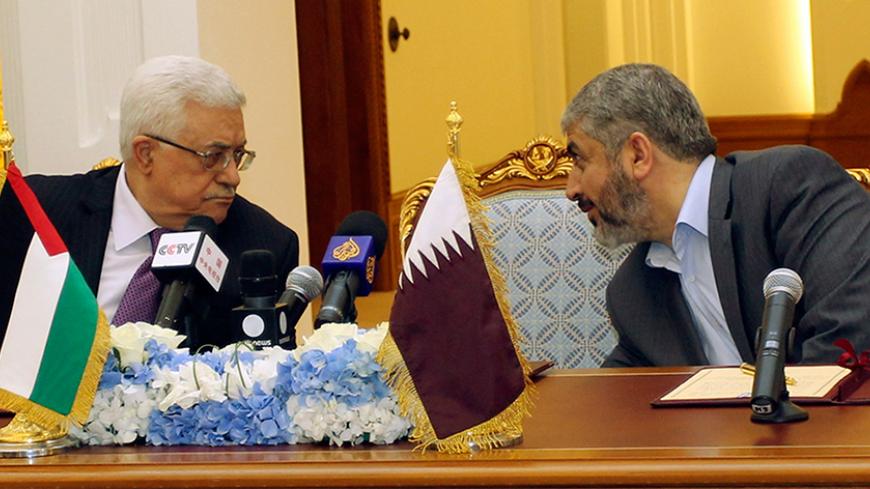 Since the Palestinian split in mid-2007, the Fatah and Hamas movements have held several rounds of negotiations for reconciliation. A number of agreements have been signed in the capitals of Egypt, Saudi Arabia, Yemen and Qatar without being implemented on the ground.

A new round of talks kicked off in Doha, the capital of Qatar, on March 26-27 between a Hamas delegation led by Mousa Abu Marzouk, a member of Hamas’ political bureau, and Fatah, whose delegation was chaired by Azzam al-Ahmad, a member of Fatah’s Central Committee. The talks centered on how to implement the reconciliation agreement signed in the Beach refugee camp in Gaza in April 2014.

Salah Bardawil, a Hamas leader, spokesman and member of its Legislative Council, told Al-Monitor, “The meeting between Fatah and Hamas’ delegations went well, in a positive atmosphere. The issue of Gaza’s state employees and their full integration into the Palestinian Authority's staff got the largest share of discussion. Hamas mainly demanded that the issuance of a presidential decree to form a new government coincide with another decree calling for the convening of a new session of the Palestinian Legislative Council, six weeks following the signing of the reconciliation agreement.”

The current round of talks between Fatah and Hamas took place after a Hamas delegation visited Egypt March 12-18 to discuss Hamas-Egyptian ties and the latest developments on the reconciliation with Fatah.

It seems obvious that Cairo is determined to see reconciliation be achieved through Egyptian mediation and not that of any other country, although there is no Egyptian veto on the Hamas-Fatah talks in Doha.

Al-Monitor has learned that sources within the Fatah and Hamas delegations agreed that Egypt serves as the main gateway to a Palestinian reconciliation, and that any reconciliation agreement should be signed in Cairo and not another capital.

Al-Monitor received a copy of the draft document on the Fatah-Hamas agreement during the latest talks in Qatar. The draft, of which Al-Monitor has produced an unofficial English translation, was based on previous agreements signed by both parties to end the split and included six items addressing the most contentious issues, except for the Hamas-appointed staff.

The draft stipulates the formation of a national unity government that assumes civil and security responsibilities and takes office in front of the president after the government formation decree is issued. There will also be presidential and legislative elections and the election of a national council, and the president will determine their schedule in a decree to be issued six months following the formation of the government. The draft specifies the activation of the Palestinian Legislative Council (PLC) under Abbas' direction. It also calls for the Palestinian Liberation Organization (PLO) development committee to meet and for the effects of the split be addressed. The draft increases Abbas’ powers at the expense of those of the PLC, a move Hamas had previously rejected. In loose terms, the document also calls for social reconciliation and public freedoms.

In conjunction with the talks in Doha, Abbas issued a decree to re-establish the Central Election Commission on March 30. On the same day, commission head Hanna Nasser arrived in Gaza, where he met with the deputy chairman of Hamas' political bureau, Ismail Haniyeh, and briefed him on the online voter registration opened in early February for the first time in Palestine.

The director-general of the Palestinian Center for Policy Research and Strategic Studies, Hani al-Masri, told Al-Monitor that he does not “expect the Qatari-sponsored current talks to be of great success, because Qatar does not hold the reconciliation keys, which are exclusively held by Egypt. Cairo would not be pleased if Doha reaped the fruits of reconciliation. Moreover, there is a camp within Fatah that wants the movement to continue to lead the Palestinian Authority (PA) and PLO and to regain control over Gaza. Meanwhile, there is a camp within Hamas that wants to preserve control over Gaza and to take part in leading the PLO, as a prelude to assuming the PA and PLO leadership. In such a situation, the talks are just a waste of time.”

It is no secret that the political developments on the Palestinian and regional arenas may accelerate reconciliation efforts this time, unlike the previous attempts. Fatah feels that its political program is precarious, as it calls for a two-state solution with Israel even though it seems to have reached a stalemate in the negotiations with the Israelis. This is particularly true since the current right-wing Israeli government rejects all political initiatives with the Palestinians. Perhaps Fatah is willing to go for reconciliation in order to pressure Israel to engage in political negotiations, using the Hamas card.

Hamas has narrow regional options, as there have been no real breakthroughs in its relations with Iran and Saudi Arabia, and the movement may be pressured to buy time through the reconciliation with Fatah.

On April 2, Khalil al-Hayya, a member of Hamas’ political bureau and a participant in the Doha meetings, reassured the nearly 40,000 Hamas-appointed employees that there will be no agreement with Fatah unless their issue is properly resolved and their salaries are paid.

Despite the prevailing optimism among the Fatah and Hamas leaders that the reconciliation will succeed, doubts persist, given the failure of previous negotiations. The devil is in the details, observers fear. Therefore, even though a national unity government was agreed upon, the process of forming one will take a long time, especially considering discussions over ministerial portfolios, most notably the Finance, Interior and Foreign Affairs Ministries.

Based on these complications, there is fear that the next government would face the same fate as the current consensus government announced in April 2014 and left unable to perform its duties in the Palestinian territories in a way that would satisfy all Palestinians.