Backers hope to calm old concerns with new plans for a bridge between Egypt and Saudi Arabia. 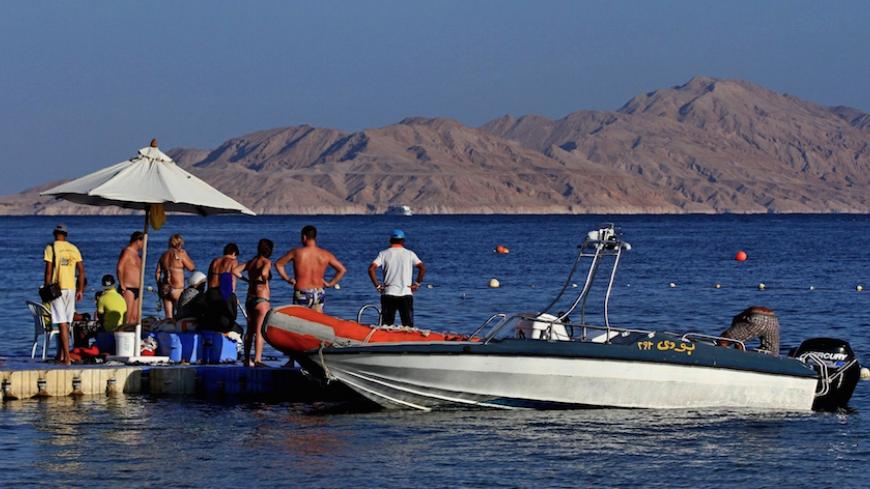 A picture taken on Nov. 12, 2015 from the Egyptian Red Sea resort of Sharm el-Sheikh shows tourists preparing to board a boat in front the Tiran island in the Strait of Tiran between Egypt's Sinai Peninsula and Saudi Arabia. - Getty Images

CAIRO — Egypt and Saudi Arabia have agreed to build a controversial bridge spanning the Red Sea that proponents say could lead Egypt out of its economic crisis.

Saudi King Salman bin Abdul-Aziz Al Saud and Egyptian President Abdel Fattah al-Sisi announced April 9 they will build a bridge that will allow for a commute time between the countries of just 20 minutes. They pointed out that the bridge will connect not only the two countries, but also the continents of Africa and Asia.

The structure, to be named the King Salman Bridge upon Sisi’s proposal, will accommodate road and rail traffic between an area near Egypt's Sharm el-Sheikh resort and Ras Humaid in Tabuk, northern Saudi Arabia, across Tiran Island.

The part of the bridge over the sea will measure 7-10 kilometers (4-6 miles), and the structure’s total length will span 50 kilometers (31 miles). The bridge, to be built over seven years, will cost as much as $4 billion. Officials project the trade volume realized through the bridge will reach $200 billion per year.

The idea of a Saudi-Egyptian bridge is not new and has always been controversial. Former Egyptian President Hosni Mubarak rejected a similar plan in 2006; it was also rejected by Israel and Jordan for several security, tourist and economic reasons.

“The bridge will cross the Egyptian island of Tiran, which [is being] ceded to Saudi Arabia in violation” of the constitution. Under the constitution, the president must “safeguard the independence and territorial integrity of the nation.” He added, “This means that any project over the island is illegal.”

He noted that Israel rejected the project in the past because it could pose a serious security threat. “Any ship carrying the Israeli flag and sailing to and from the port of Eilat may be targeted from the bridge by militants who can either throw grenades or carry out suicide attacks by driving cars off the bridge onto ships.”

Also, Tiran Island lies within the West Bank’s Area C, which is Israeli-controlled.

However, Hassan Nafaa, head of the political science department at Cairo University, told Al-Monitor, “The existence of Tiran Island within Area C does not preclude construction of the bridge or violate the Camp David treaty, since there is no military presence in Area C, where the only security forces are the members of the civilian police. Israel must respect the sovereignty of both Saudi Arabia and Egypt.”

Gamal Abdel Gawad, external relations director at Al-Ahram Center for Political and Strategic Studies, pointed out some considerations he said can’t be overlooked. He told Al-Monitor, “This bridge may not be built without security understandings being reached between Saudi Arabia and Israel and without being preceded by a political arrangement, which will most likely be sponsored by the US.”

Ibrahim Ahmad, head of the international law department at Ain Shams University, told Al-Monitor, “After the completion of the legal procedures in Egypt to transfer the ownership of Tiran Island to Saudi Arabia — based on the consent of the Egyptian parliament and a referendum — all of the Egyptian commitments regarding the island shall pass on to Saudi Arabia by virtue of the international inheritance rule. That means that Saudi Arabia has become a party to the Camp David treaty.”

As for Jordan, its leaders believe the bridge will siphon off business from Jordan’s economy, according to Nabil Badr, assistant foreign minister and Egypt's former ambassador to Jordan. That concern is unfounded, he said.

“Jordan fears the bridge will cause a decline in the quantity of goods and the number of passengers passing through its territory, which will impact the service-based Jordanian economy,” Badr told Al-Monitor. “But, in fact, this bridge will support the economy of Jordan, since the city of Haql [along the Jordanian border] will constitute a focal point for goods coming from Syria, Iraq and north Asia countries and to be transported via the bridge.”

Mubarak’s objections to the bridge in 2006 also were unsupported, according to Chamber of Hotels member Naji al-Arian.

Among the bridge’s benefits, he noted: “Most Arab tourists prefer traveling in SUVs and the bridge will allow them to reach Egypt in their private vehicles. The bridge will create a new type of tourism, transit tourism, which means that travelers across the bridge ... will be able to visit the Egyptian Museum in Tahrir and the pyramids to take photos. Trips to these sites often take at least three hours, which will increase the tourism resources.”

Skeptics have questioned the wisdom of building a sea-spanning bridge in an earthquake-prone area. But Sabri al-Hakim, a bridge expert from Al-Azhar University, told Al-Monitor that modern technology could alleviate those concerns.

“Although the bridge crosses a zone of great seismic activity, passing through the Great Rift Valley, engineering solutions may solve these obstacles,” Hakim said. “For example, Japan is one of the most earthquake-prone countries in the world, yet it includes a large number of suspended bridges.”

Saudi writer and political analyst Mohammad al-Saad, a member of the delegation that accompanied Salman to Egypt, told Al-Monitor that the bridge will make Egypt a gateway for commercial and economic activities between the Middle East and West Africa. He stressed that this project complements the new Suez Canal and will accommodate global trade trips, making Egypt a strong competitor to the port of Dubai.

Egypt stands to gain a lot economically, agreed Ibrahim Nahas, head of the political science department at King Saud University and a member of the delegation accompanying Salman.

“This Saudi-Egyptian partnership will grease the wheels of the Egyptian economy. The project will reduce unemployment by creating new jobs and will enable Cairo to overcome its numerous economic crises,” Nahas told Al-Monitor.