Can Egypt's new Cabinet avoid mistakes of the past? 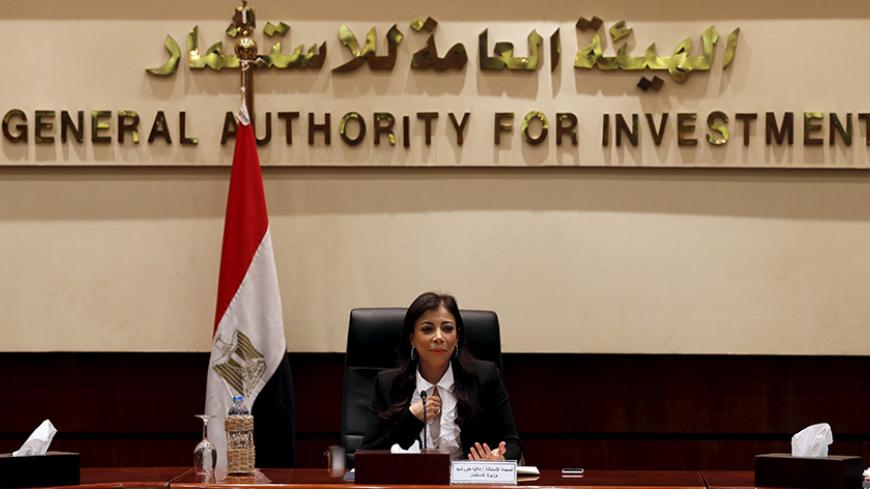 Egypt's new Investment Minister Dalia Khorshid speaks during the first news conference with journalists after her appointment to the new government at the headquarters of the Ministry of Investment in Cairo, April 3, 2016. - REUTERS/Amr Abdallah Dalsh

Some people are antsy about Egypt’s recently reshuffled Cabinet, which is heavily laden with representatives of the business sector.

“The concern is that power and capital will link up once again to serve the interests of investors and businessmen, at the expense of ordinary Egyptian citizens, whether through the businessmen themselves or through the administrative and economic specialists who work for their companies,” economist Farag Abdel-Fattah from Cairo University told Al-Monitor.

It wouldn’t be the first time. The new ministerial roster is bound to draw comparisons with the Cabinet of Ahmed Nazif, who was prime minister from 2004 to 2011 under former President Hosni Mubarak. Despite the economic achievements of that government, it was hounded by countless accusations of corruption, leading to a number of its ministers being jailed or fleeing the country after the revolution of Jan. 25, 2011.

Though many of the accused subsequently were acquitted or reconciled with the state, and notwithstanding their achievements, the experience left a bitter taste in the mouths of many Egyptians when it comes to businesspeople seizing the reins of power.

That lingering impression has led to fears about the changes last month made by current Prime Minister Sherif Ismail. Many of his 10 new ministers head large investment entities, hailing from the same milieu as Mubarak's and Nazif’s ministers: the business sector.

In that context, Nazif’s second Cabinet included six businessmen: Transportation Minister Mahmoud Mansour, owner of Mansour Automotive Group; Minister of Agriculture Amin Abaza, one of the largest investors in the cotton industry; Health Minister Hatem el-Gabaly, who was a partner in his family-owned Polyserve Fertilizer company; Housing Minister Ahmed El Maghrabi, a shareholder in the AccorHotels company and a partner in the Mansour and El Maghrabi groups; Tourism Minister Zuheir Garana, owner of the Garana Tourism Company; and Minister of Trade and Industry Rachid Mohamed Rachid, who owns, along with his family, Unilever Mashreq Company, one of the largest companies operating in the food sector.

Following the limited achievements of his first Cabinet (July 2004-December 2005), Nazif’s second Cabinet (December 2005-January 2011) undertook to repair the damage caused by the Cabinet of his predecessor, then-Prime Minister Atef Ebeid (1999-2004), and the economic crises that the latter engendered, which greatly resemble those currently besetting Egypt’s economy.

Among those crises was the rise of the dollar against the Egyptian pound, which followed Ebeid’s 2003 decision to float the dollar-to-pound exchange rate and allow it to be controlled by market mechanisms driven by supply and demand, without intervention from the central bank. That approach led to the dollar rising from 3.4 to 5.35 Egyptian pounds, a 57% decrease in the pound’s value. Following a period when the exchange rate stabilized at this point, the rise resumed to reach 5.8 and then 6.2 pounds to the dollar; with the latest increase being one of the main reasons for the toppling of Ebeid’s Cabinet, as the value of the pound collapsed by 82% during his term in office, while the dollar crisis cast its shadow on the prices of all products, leading to one of the sharpest cost of living increases ever suffered by Egyptian citizens.

In addition, the rise in the value of the dollar against the pound led to a drop in the value of Egypt’s foreign currency reserves, from $18 billion to $13.6 billion dollars (a 24% reduction).

The decline of foreign currency reserves during Ebeid’s term was linked to a drop in the flow of hard currencies to Egypt, due to the collapse in foreign investments (FDI) in the Egyptian market. For, in 2001, said flows dropped to 509 million after having topped $1.24 billion during 2000 (a 59% decrease), though they did rise slightly in 2002 to reach $646 million, only to resume their collapse to reach $237 million in 2003, according to World Bank statistics.

It should be noted that Egypt has been suffering from a drop in investment flow since 2011, when no new investments were recorded and $482.7 million was withdrawn from the Egyptian market. Yet, despite the quick recovery in foreign investment flow — when it reached nearly 2.8 billion in 2012, 4.2 billion in 2013 and 4.78 billion in 2014 — Cairo continued to aspire to attract more investments, as evidenced by its stated goals during the March 13-15, 2015, economic summit in Egypt.

The Cabinet changes undertaken by Ismail differ from those of Nazif’s government in terms of the backgrounds of its ministers: Finance Minister Amr al-Garhi, who was the managing director of Citadel Capital and Hermes Securities; Investment Minister Dalia Khorshid, who was the executive director and financial officer for Orascom Construction; Tourism Minister Yehia Rashed, who was executive director in charge of the hotel and tourism unit at Al Kharafi Group; Minister of Trade and Industry Tarek Kabil, who is a partner in the United Arab Emirates’ Abraj Group, in charge of the group’s companies in Turkey and Central Asia; Minister of Electricity Mohamed Shaker, founder and head of Shaker Consultancy Group; and Communications Minister Yasser al-Qadi, who was managing director of HP Egypt.

Economist Fakhri Al Faki, who teaches at Cairo University, told Al-Monitor that, though eight of the 10 new ministers do have business and investment backgrounds, they were basically administrative and economic experts as opposed to shareholders, as was the case in Nazif’s Cabinet. As such, it would be difficult to characterize this as a government of businessmen, and it should instead be described as a new form of technocratic government that relies on people possessing practical experience instead of purely academic backgrounds, Faki said.

Sameh Abou Arayes, a stock market expert and president of the Arab Society of Technical Analysts, wrote on his Facebook page, “Among the achievements of the Nazif government is that it successfully reduced the dollar-to-pound exchange rate from 6.25 to 5.8." During Nazif’s premiership, according to the World Bank, foreign investment flows reached $6.385 billion in 2010, despite the economic crisis of 2008, which led 2008 investment flows to drop to $9.494 billion, having reached a high of over $11 billion in 2007, the highest FDI flow ever achieved by any Egyptian government.

The above achievements lifted foreign currency reserves from $13.5 billion to $32 billion. Yet, the current government will be haunted by comparisons with the achievements attained by Nazif’s second government, and will be subject to the same concerns raised by the latter’s business-sector Cabinet.