Recent devaluations of the Egyptian pound are making importers, contractors, consumers and the government nervous, but this may be what Egypt needs to become a more competitive exporter of products and services. 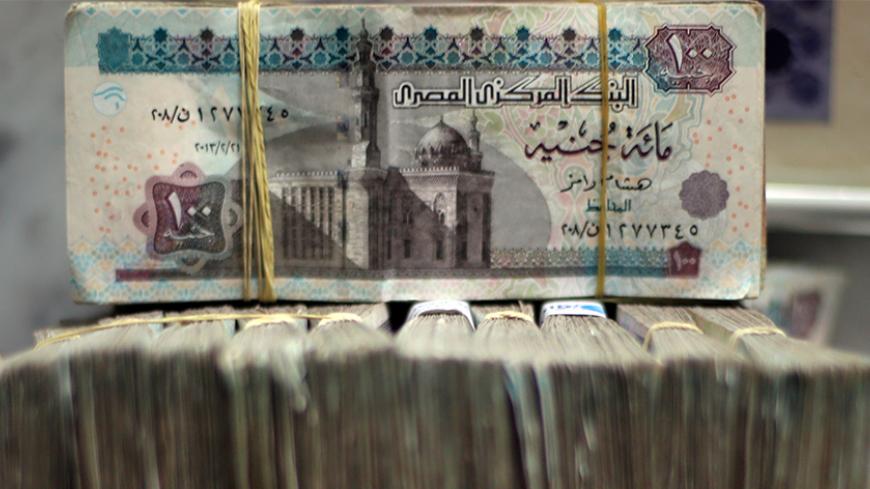 Egypt's pound notes are pictured in stacks of 100 as employees count money at an exchange office in downtown Cairo, June 5, 2014. - REUTERS/Amr Abdallah Dalsh

Tarek Amer, the new governor of the Central Bank of Egypt, started to assume his responsibilities on Nov. 29, replacing Hesham Ramez, the former governor who resigned last month after a series of sharp currency devaluations. Amer started by keeping the pound at its current official levels of 7.83 pounds to the dollar, recovering from the previous reduced level of 8.03 pounds to the dollar, while offering banks a limited amount of foreign currency to partially fulfill clients’ needs for financing imports of key commodities and raw material. The dollar currently changes hands in the black market at around 8.5 pounds to the dollar.

Recent devaluations of the Egyptian pound are making importers, contractors, investors, consumers and the government very nervous. The exchange rate stood at around 5.75 pounds to the dollar prior to the January 25 Revolution, at the beginning of 2011. Since then, the pound was slowly devaluated to its current levels. But even these lower levels may require further devaluations. Taking into account a $20 billion drop in foreign reserves (from $36 billion in January 2011 to $16 billion in September 2015) in addition to a minimum of $23 billion in grants and deposits between July 2013 and the end of 2014 — mainly from Saudi Arabia, the United Arab Emirates (UAE) and Kuwait — Egypt seems to have spent a minimum of $43 billion in the last four years alone to effectively "subsidize" a low US dollar (versus the Egyptian pound).

Despite a huge trade imbalance, where the gap between imports and exports reached around $40 billion in 2014, the Central Bank was able to sustain the Egyptian pound and accumulatively increase foreign reserves by $20 billion between 2004 and 2010. Between 2004 and 2010, Egypt’s trade deficit saw a consistent increase from $6.29 billion in 2004 to $26.49 billion in 2010. Despite this growing deficit, the Central Bank under Farouk El Okda’s governorship, however, managed to keep the dollar exchange rate at around 5.75 pounds to the dollar between 2006 and 2010, with minor fluctuations, and indeed increase Egypt’s foreign reserves from below $15 billion in 2004 to over $35 billion in January 2011. This was made possible through a number of main contributing inflows, namely tourism, remittances of Egyptians working abroad who consistently transferred large amounts of foreign cash back home, and revenues from the Suez Canal and oil exports.

This effectively meant that Egypt was “subsidizing” foreign imports using these sources. The result was decreased price competitiveness of Egyptian products and services, especially with the gradual removal of custom barriers as a result of the General Agreement on Tariffs and Trade, the World Trade Organization and other trade agreements. This put pressure on Egyptian exports and helped flood the country with imported products that were cheaper to buy abroad than manufacture at home. Many manufacturers turned to importing or real estate as it became increasingly unviable to manufacture products in Egypt. But the foreign reserves were rising and the Egyptian pound enjoyed enviable stability, so few experts would seriously lend credence to the criticism directed at a low dollar and overvalued Egyptian pound.

This stability, however, was upset after the January 25 Revolution. With reported incidents of violence, tourism was hit badly and Okda had to spend from the reserves to keep the currency under control to ease inflationary pressures. After former President Mohammed Morsi’s constitutional declarations in November 2012 and the following dissent, confrontations and street violence, Okda — sitting on dangerously depleted foreign reserves — realized that the situation was no longer sustainable and offered his resignation. The country saw severe shortages in electricity and fuel in 2013, as the government had no foreign cash to finance imports. This eventually contributed to the removal of Morsi on June 30, 2013 — the end of Egypt’s fiscal year and exactly one year after he was sworn in — which opened the door for receiving assistance in foreign cash grants and deposits as well as free fuel shipments mainly from Saudi Arabia, the UAE and Kuwait. That cash, however, was used to sustain an artificially lower dollar as the government continued to effectively subsidize imports to prevent sending inflation out of control.

But does a low dollar really benefit the Egyptian economy? What are the costs and benefits of a low Egyptian pound? And what are the costs and benefits for a low US dollar? A higher dollar could further complicate the government’s attempts to stabilize the country politically and socially. For the government, the budget deficit will rise, the cost of servicing foreign debts will soar, the gross domestic product when computed in US dollars will drop and inflation will take a major surge, at least in the short term. Inflation would hurt poorer segments of society and those with fixed incomes, thus adding new elements of social and political destabilization. Keeping the dollar low is beneficial in psychological terms, especially for the elite decision-makers, importers, and Egyptians who travel abroad or those with children studying in international schools and foreign universities. A higher dollar will mean that many items such as cars, appliances, electronics and imported clothes will be much more expensive. But a higher dollar also means that energy and wheat prices will rise, sending energy and bread subsidies through the roof.

But a low dollar is no longer sustainable. To keep the dollar low, the previous Central Bank governor adopted measures limiting access to foreign cash that caused a general slowdown in the economy, especially in the manufacturing sector that heavily relies on importing raw and intermediate materials, equipment, tools, spare parts and supplies. These measures badly hurt exports as well. Exports in particular can be hit by bureaucratic barriers far worse than by an appreciating dollar price, since it renders Egyptian exporters out of sync with the tempo of doing business as compatible links in global sourcing chains and networks. To provide a disincentive for dollarization, the Central Bank also increased the interest rate on the Egyptian pound, which further increased the cost of borrowing, hurting business expansion and increasing the cost of working in Egypt, again sending more compressional waves through the economy.

Amer has to figure out a plan to balance the currency needs of a country that imports roughly three times what it exports. But this cannot be the task of the Central Bank alone. The whole government, in fact the whole country, must think of ways to revive the economy, boost national productivity and competitiveness and bring enough dollars to finance Egyptians’ growing appetite for imported goods. With the low oil prices, the Gulf states are having budget deficits and they will find it hard to continue financing Egypt with foreign cash that is used to keep a low dollar only for a few more months. It is just an unsustainable situation. So, instead of fighting the inevitable, the Egyptian government and the Central Bank may just brace themselves for an unavoidable correction, implement major currency devaluation with a bundle of measures to revamp economic growth, encourage exports and remove the bureaucratic barriers that have suffocated exporters. The government and the Central Bank also need to take necessary measures to shield the most vulnerable segments of Egyptian society, which will be hurt by the wave of inflation that will undoubtedly follow the pound’s devaluation hopefully to a value that will close the trade deficit and make Egyptian exports price-competitive and Egypt a popular destination for investment in manufacturing.