The worrying economic situation in conflict-ridden Syria has sent tremors through Lebanon, a country that maintains strong economic ties with its eastern neighbor, writes Elie Hajj. 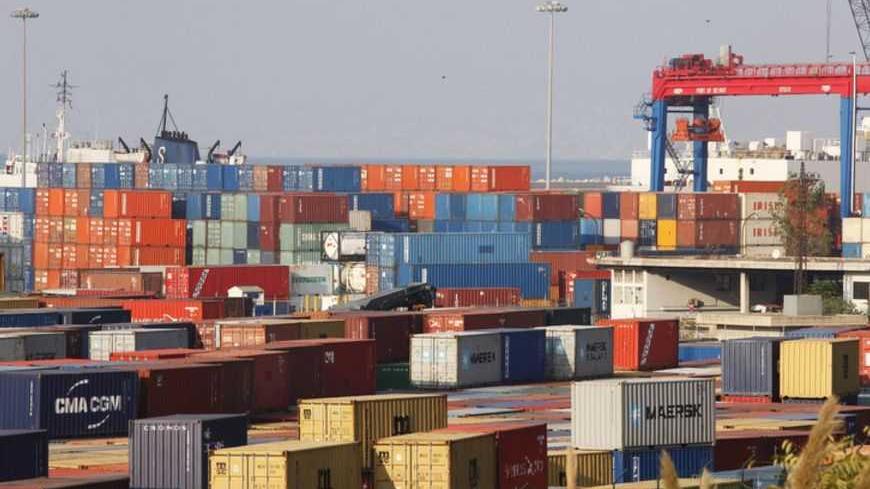 A general view shows a shipping container area at the port of Beirut, Nov. 20, 2012. - REUTERS/Mohamed Azakir

Economists in Lebanon are keeping a close eye on the Syrian economy, given the strong economic ties that exist between the two neighboring countries. The military confrontations and general unrest in Syria over the past two years have caused much worry amongst their neighbors to the west, with the Syrian lira losing 50-70% of its value. What’s more, estimates of losses related to infrastructure and the economy stand at about $200 billion.

Among other things, Lebanon’s deep concern over the fate of Syria can be traced back to the fact that it represents the only land bridge by which Lebanese exports can reach Jordan, Iraq and the Gulf states. Although maritime transport is always an option, it can be pricey in comparison and is not ideal for many goods, especially agricultural products.

Violet Bala, head of the economy section of Annahar newspaper, which has a special column devoted to the Syrian economy, told Al-Monitor that “Lebanon’s economy has been negatively affected by the armed conflict in Syria in many ways.” She pointed to the fact that 22% of the tourists visiting Lebanon had been Jordanians who would travel to Beirut by car or charter bus via Syria, however two years ago they stopped making the trip.

Gulf states have banned their citizens from traveling to Lebanon out of fear of the Syrian crisis spilling over into Lebanon as well as for other geopolitical reasons related to their standing disputes with Iran and Syria. This has forced Lebanese expatriates working in sectors related to the tourist industry to underwrite earnings, in sectors related to hotels, restaurants, cafes, car rental companies, telecoms, fuel and others.

Adding to this, Bala said, “Foreign investment in Lebanon has suffered some severe setbacks because of the Syrian crisis. Capital from abroad links the Lebanese investment environment to the war in Syria, which has not subsided despite dragging on for 24 months now, and claimed a terrible number of victims while causing indescribable destruction.”

It’s an undoubtedly bleak outlook. Not even Lebanese investors are embarking on new investments, which is forcing all sectors into skid. Capital is known for its cowardice and for looking askance at ventures it deems risky; it requires a clear forecast and even hint a hint of clouds is enough to send it scurrying. However many Lebanese investors expect huge construction efforts to begin once the crisis in Syria draws to a close, and they fancy themselves the most well-positioned and well-qualified to fulfill this demand. It is also noteworthy that several economic sectors in Lebanon, including a number of banks, invested in Syria before the outbreak of the armed conflict and suffered losses of varying sizes but were able to absorb them.

Bala mentioned that there are no official statistics regarding the damage done to the Syrian economy, but studies estimate that it stands somewhere between 46-81% of GDP, i.e., between $24-48 billion. The assessments available agree that Syria’s economic collapse has been the worst of all the countries that have experienced similar armed conflicts. Compounding this, Syria’s national currency, the lira, has lost more than 50% of its value and its central bank has drained its reserves.

A report published by the Syrian Center for Policy Research stated that output declined by 50% and capital stock declined by 43%, which is what is believed to have caused the negative growth output of -18.8% and increased the budget deficit to 18.5% of GDP for 2012. This means that the crisis had a negative impact on balance of payments, bringing the cumulative deficit to $16 billion. This in turn was covered by funds from foreign reserves, which fell from about $18 billion in 2010 to about $2 billion in 2012.

According to the report, the economic and social repercussions of the armed conflict have caused prices to jump in Syria. Gas and electricity prices have witnessed the largest increase, followed by food stuffs and dairy products, then non-alcoholic drinks and sugar, then clothes, shoes, bread, and grains: all of which have acutely affected Syrian families. There has also been a noticeable increase in the costs of maintenance work and equipment, with price increases in general hitting the province of Aleppo the hardest.

The sanctions imposed on Syria have negatively impacted the standard of living, with common Syrians, especially the poor and other vulnerable groups among them, shouldering the brunt of the inflated costs. The sanctions have contributed to a decline in individual welfare and per capita income and have slowed the pace of growth that the country had witnessed prior to 2011.

Sanctions hit the oil sector particularly hard, with foreign companies withdrawing ever since October 2011. Oil production has declined 47% and so have exports. Oil production is now barely enough to cover the needs of local banks, which has thus negated one of the Syrian economy’s most important sources of foreign business.

The sanctions’ effects are not limited to these sectors for they also include restrictions on financial transactions, insurance and transportation. They have led to complications in importing oil derivatives — such as diesel and cooking gas — which has made way for the emergence of black markets that have in turn negatively impacted the cost of living for families.

Dr. Adib Mayaleh, the governor of the Central Bank of Syria, announced that he would take “decisive action” to halt the rise of the dollar, which on several occasions has been valued at more than 110 Syrian lira, after eventually stabilizing at about 50 lira. The lira was not able to weather these successive shocks, having lost more than 16% of its value against the dollar, and later continuing in its decline in 2012 losing around 70% of its value. The currency’s decline has directly caused prices and the cost of living to rise, and consequently, poverty rates have gone up too.

However Syrian economic expert Mohieddin Kassar recorded that during the revolution the dollar leaped from 47 Syrian lira to the dollar to 113 Syrian lira, meaning that its value increased by 230% against the lira.

Since the outbreak of the armed conflict, the Syrian regime has adopted a policy of subsidizing the lira with hard currency reserves provided by the central bank. This caused the reserves to drop from $23 billion before the revolution to $5 billion after six months into the war. Simple arithmetic shows that Syria has lost about 78% of its hard currency reserves. Meanwhile deposits in the eight Syrian banks have fallen 30-35%.

Naturally, veteran traders and ordinary citizens alike have rushed to exchange their money into USD by any means and overcome the prohibitive official measures put in place to prevent them from doing so. After the regime put a stop on withdrawing cash in foreign currencies, many Syrians have resorted to smuggling their money in various ways abroad.

It is noteworthy that for more than 42 years, Syria’s economy has operated within a welfare state system with about 85% of the $24 million in state subsidies going to essential goods and services. This helps to explain the conditions of extreme distress Syrians are now experiencing with the country in a state of turmoil, something which is only expected to worsen more and more as the battles rage on and the tragedy deepens.