Often eclipsed by the Syrian conflict’s exorbitant human cost, the embattled country’s economy has plummeted over the past three years under stringent international sanctions. 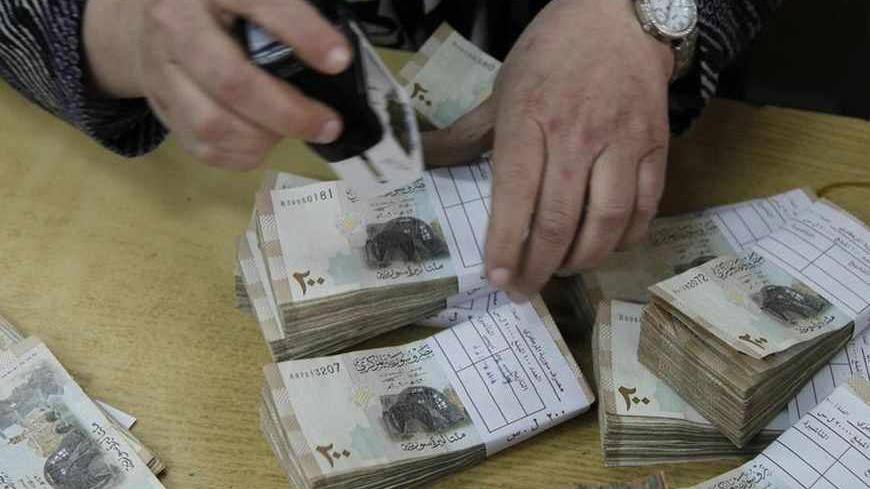 An employee stamps stacks of Syrian pound notes at the Central Bank of Syria in Damascus, April 23, 2013. - REUTERS/Khaled al-Hariri

International and Arab attention is focused on the developments on the ground in Syria and the geographical dimension of the crisis. The fall of a city or neighborhood into the hands of a certain faction or the arrival of certain kinds of weapons to a particular military group elicits analyses and counter-analyses, mixed expectations and leaves decision-makers powerless and confused.

Today, however, the surprise that changes the balance of power may come from a completely different angle: the economic angle.

It is no longer a secret that the Syrian regime is suffering financial difficulties, which is evident in the sharp decline in the exchange rate of the Syrian pound, which traded at 47 pounds to the dollar at the conflict's outset in March 2011, and is trading at a rate ranging between 235 and 240 against the US dollar, compared to 320 a few weeks ago before the government intervention.

The reasons for this sharp decline can be attributed to the military efforts exerted by the regime and the suspension of the production cycle. This happened despite the official statements and media efforts to dispel doubts about the strength of the national currency, the procedural measures taken by the Syrian government to protect the currency, which do not comply with the rules of the free market economy, and the attempts to save it by political allies.

A few days ago, the Syrian president issued a decree which penalizes anyone who trades in or sets prices with a currency other than the Syrian pound, in an attempt to control the black market and end the speculation that is weakening the actual value of the pound. Regardless of the secureness or effectiveness of such measures, they reflect a loss of confidence in the national currency, which is the cornerstone of any economic system. All attempts to support the national currency by force or through the media, whether by resorting to conspiracy theories or accusing external parties of manipulating the markets, will be useless. Contemporary economic history has many examples about the futility of adoptive coercive solutions to address economic challenges, the latest of which was Turkish Prime Minister Recep Tayyip Erdogan's failed attempt to stop the deterioration of the Turkish markets through media and political escalation.

A few weeks ago, the regime raised the salaries of employees in the public sector by 40%. This step may seem surprising and contrary to expectations considering the critical financial situation of the government. Thus, it can be regarded as a media maneuver designed to dispel doubts about the regime’s prospects of survival. However, in reality, the decision to raise salaries is based on political economic logic, which aims to contain the rise in fuel prices.

This step is likely to have been financed by transferring part of the funds allocated for projects that were suspended because of the war, such as infrastructure projects or frozen expenses related to schools. It should be noted that the withdrawal of the regime forces from 60% of Syrian territory, in some cases voluntarily, is based on an economic logic, which would relieve it from a considerable financial burden.

The question today is: Will the Syrian currency hold up in the face of the pressures of military operations? And for how long? The answer to this question requires an examination of the foundations of the Syrian economy and its recent transformations.

The exchange rate of any currency is determined by the national production growth rate and its ability to export and attract foreign currency, which is the main point here. The Syrian economy is suffering a huge decline in its growth cycle, which fell by 2% in the year 2011 at the beginning of the revolution, and by 31.4% and 7.1% in 2012 and 2013 respectively, with the intensification of military combat. According to a report issued by a Lebanese bank, the economic cost of the revolution, or the opportunity cost, has risen to $19.3 billion, the equivalent of 91.93% of the gross national product, based on the statistics and criteria for the year 2010.

It should be noted that the economic cost does not take into account the direct cost resulting from the destruction of infrastructure and the damages to assets and investments that lost value due to the deterioration of the Syrian currency. In this context, the Syrian Center for Strategic Studies estimates the size of the losses resulting from the Syrian war at about $84.4 billion. There is also the military cost, which is estimated at around $7 billion in the past two years. All these factors have increased pressure on the central treasury and raised the public debt by 17% compared to the GDP.

It would have been possible to absorb this enormous burden if the regime had been able to rely on oil exports or other external revenues. This was the case in countries like Iraq and Iran, which were able to withstand wars that exhausted them at the human and economic levels. However, Syria does not have similar oil resources, and its limited oil resources are useless due to the blockade imposed on it by the Arab and international community. Oil production has dropped from 380,000 barrels per day to 20,000. According to Syrian economists, the economic sanctions imposed by the European Group on Syria is the main reason for the rise in the rate of inflation and the deterioration of the currency exchange rate.

Nineteen out of 22 Arab member countries of the Arab League have, since 2011, imposed similar sanctions, which prohibit doing business with any government party through the Central Bank of Syria and Syrian commercial banks, and prevent their nationals from traveling to Syria or investing in it. The measures that have had the greatest impact are the restrictions on commercial traffic, which include petroleum products and all exported goods. Here, it should be noted that the Syrian economy recently depended on tourist traffic from the Arabian Gulf, and 52.5% of its exports in 2009 were directed toward the Gulf markets.

The Syrian regime has so far relied primarily on its Iranian and Russian allies for financial and economic support related to the burdens of war. It has also relied on credit loans under agreements with countries like China. The financial support from Russia is not in the form of aid, but loans. This is not expected to continue, at least at the same pace, in light of the threat on the regime and its ability to survive.

As for Iran, it is the main supporter. However, it is also facing an aggravated international blockade that has exerted pressure on the Iranian street, which is boiling and suffers a shortage of foreign currency and higher prices. "Inflation levels have reached 42%," tweeted Iranian President Hassan Rouhani on July 21. A few days earlier, Rouhani had stated these words before the Iranian parliament, as if referring to the greatest enemy, which may change all the equations.