Will Cairo decide to float the pound?

Egypt's severe dollar shortage has contributed to the crisis facing the national currency, leading some to speculate a decision to float will come soon. 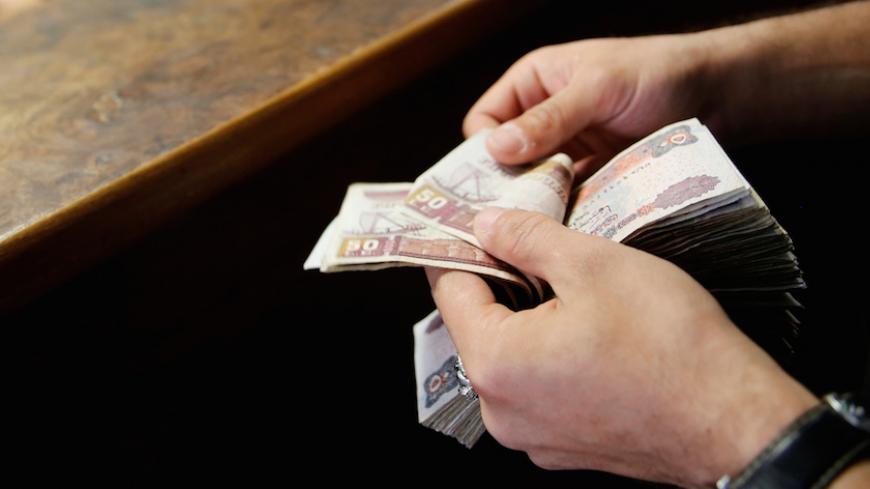 A customer counts his Egyptian 50 pound notes at an exchange office in downtown Cairo, April 19, 2016.

The manager of a currency exchange shop in Giza who preferred not to be named told Al-Monitor that statements made by Central Bank of Egypt Gov. Tarek Amer signaling another round of devaluation was around the corner have prompted those in possession of US dollars to hang on to them. He pointed out that this unprecedented exchange rate is due to the increase in demand for the dollar to meet the import needs amid a decrease in supply.

Amer said July 3 that the focus on defending the pound had been a grave mistake, costing the state billions of dollars, noting that a weaker currency would bolster exports. So far, the official price of the dollar stands at 8.85 pounds for purchase and 8.88 for sale, while the Central Bank has been pumping weekly $120 million at this price to support the banks operating in the local market.

Amer’s remarks were not the only reason for the dollar price spike. According to Khaled Abdel Fattah, a professor of finance and investment at Ain Shams University, the current Egyptian administration has been implementing national projects beyond the gross domestic product capacity, stressing that such projects have been a burden on the government and citizens instead of achieving desired economic gains.

Abdel Fattah told Al-Monitor that the Central Bank’s decision last June to raise interest rates on deposits and lending in Egyptian pounds to face the rising inflation rates backfired, as many owners of dollar deposits rushed to exploit parallel markets to sell dollars, depositing the value of these transactions in banks to take advantage of higher interest rates. This has allowed speculators to take control of the dollar exchange rate.

The professor said the dollar price in parallel markets reached 12.20-12.70 pounds because of the remarks of Egyptian Finance Minister Amr Garhi about the government’s plans to secure a $12 billion loan from the International Monetary Fund (IMF). However, he raised concerns about floating the pound in implementation of the IMF terms for the loan.

“Floating the pound will increase inflation, which has already reached a catastrophic rate,” Abdel Fattah said, adding that devaluing or floating the pound would be negatively reflected on the purchasing power of most Egyptians, especially with the continued reliance on imports of basic needs.

According to the Central Agency for Public Mobilization and Statistics, the inflation rate rose in the month of June to 14.8% because of the increased prices of food and garments.

Financial adviser Ahmad Adam agrees with Abdel Fattah on the inability of the Egyptian people, especially low-income earners, to afford further rises in the prices of goods and services, stressing that this increase is inevitable should the pound be floated or devalued under the current economic situation.

Adam told Al-Monitor that the Central Bank had succeeded in controlling the exchange rate when it decided to float the pound back in 2003, given the strength of Egypt’s foreign currency resources at the time thanks to the tourism boom and the returns of privatization of many public sector organizations.

He believes that the current weakness of dollar resources is what prevents the Egyptian administration from floating the pound, adding that the remittances of Egyptians abroad, the exports and the Suez Canal revenues, tourism and foreign aid all dropped in 2015, not exceeding $60.5 billion, while imports, which are a single side of spending, reached $60.8 billion.

“Amending banking operation laws, raising their minimum capital funds could solve the dollar crisis without the need to float the pound or borrowing,” Adam said. Raising the Egyptian bank's minimum capital to $500 million instead of 500 million pounds, he said, could provide the Central Bank with the dollar liquidity necessary to import basic goods for an entire year.

According to Adam, by applying this measure the Central Bank would be able to better control the dollar price or float the pound without fear of any negative impact on the lives of citizens. Amending the banking operation policies could also help attract several significant financial entities to the Egyptian market, he said.

Basant Fahmi, financial adviser and member of the Economic Committee in the Egyptian parliament, told Al-Monitor, “The Egyptian administration has to work on increasing the cash reserve of foreign currency before any special procedure aimed at liberating the exchange rate or devaluing the pound. Fahmi said the banking system’s inability to finance the import of raw materials and basic goods would lead to catastrophic dollar prices should the pound be floated.

The Central Bank cash reserve amounts to about $17.54 billion, according to Amer’s statements July 8.

Fahmi noted that floating the pound might be among the IMF conditions for a loan. However, she warned the Egyptian government against accepting such a condition, stressing that floating the pound in light of lack of dollar supply would lead to a sharp spike in the green currency price. This would cause a halt in the industrial and commercial activities as business owners would not have enough US dollars.

Fahmi said the parliamentary Economic Committee met with the Central Bank governor following his remarks signaling further devaluation of the pound to discuss the economic situation and the cash reserve management. She confirmed they agreed that the reasons behind the current crisis lie in the scarcity of dollar resources, high rates of inflation, the budget deficit, and domestic and foreign debts, which require quick steps on the part of the government to provide further facilities to attract direct foreign investment.

Fahmi also added that the state ought to continue its actions to ease the pressure on the dollar, noting that the current government is working on raising national production rates and reducing government spending by applying the civil service law, seeking to increase tax collection. She stressed that the success of these measures would allow the state to contain the economic crisis in Egypt, considering that the high price of the dollar is a symptom of the crisis.