After seizing Zaman newspaper, what's next for Turkey?

Not just a few newspapers like Zaman, but the entire Turkish media is under threat by the current regime in Turkey. 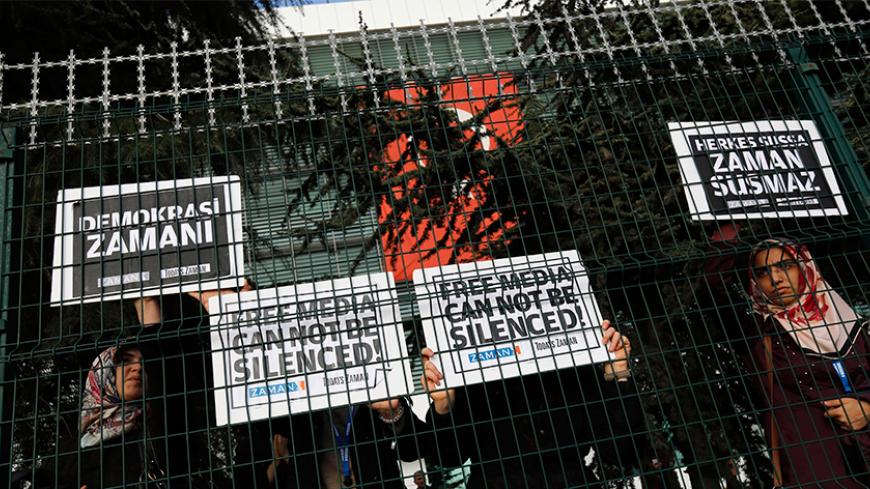 The Zaman media group's employees and their relatives hold banners outside the headquarters of Zaman newspaper in Istanbul, Dec. 14, 2014. - REUTERS/Murad Sezer

Something very unusual, if not unprecedented, happened in Istanbul March 4. A group of policemen marched to Zaman, Turkey's largest-circulation daily newspaper, with a court order to seize it. They dispersed the hundreds of protesters waiting for them in front of Zaman's offices with tear gas, forced themselves into the building and took control of the newsroom. Soon, Editor-in-Chief Abdulhamid Bilici learned that he was fired. The newspaper's website went offline. Meanwhile, Zaman's 27 years of digital archives — including all of its news stories, editorials and op-eds — were erased. A whole newspaper was destroyed.

The destruction made room for a new creation. A day after the police took full control, Zaman, which had lately become very outspoken against President Recep Tayyip Erdogan and his rule, found itself with an opposite political line under a trustee appointed by the government to manage the paper. It now praises Erdogan and his glorious "New Turkey." In other words, it became one of dozens of other Turkish newspapers whose sole mission is to support the powerful president and intimidate his foes.

This news may have shocked outsiders, but in Turkey, hardly anyone was surprised. It was clear that Zaman and its entire media group, including Cihan News Agency, would be seized, as Ipek Media Group, which published the dailies Bugun and Millet, was seized last October and turned pro-Erdogan overnight. All these news outlets were affiliated with the movement of Fethullah Gulen, and the Turkish public is repeatedly told that every asset of his religious community will be confiscated by the state.

Who circulated this news? The regime's own propaganda machine did, in particular a columnist in the pro-Erdogan daily Star who had recently become quite famous (or notorious) in Turkey as the mouthpiece of the new national security establishment. Cem Kucuk had written repeatedly (and joyfully) about the impending Zaman takeover.

After the seizure, the same columnist wrote a piece headlined "The real struggle is beginning only now," referring to the struggle with the "Fethullah Gulen Terror Organization," as the pro-Erdogan media has been calling it lately. Accordingly, all assets of the Gulen movement, including the new dailies that took the place of Zaman and Bugun, various news sites and 17 different universities across Turkey would also be seized. The reason: A "terrorist organization" — in fact "the most dangerous terrorist organization of the past 1,000 years" — could never be allowed to have such assets in any democratic society.

This is how the current regime in Turkey justifies the confiscation of Zaman and other closures of media outlets that have stood in its way. But this rationale raises many questions. At the very least, we have to ask if the Gulen movement really is a terrorist organization, and why Erdogan and his party were in close collaboration with it until 2013, when the decade-old political alliance between these two camps collapsed. Most of the alleged crimes by the Gulen movement's members in Turkey's police and judiciary — such as illegal wiretapping and doctoring evidence to jail political opponents — took place before 2013 and with Erdogan's full support. (That must be why the columnist in question emphasized that the Gulen movement must be considered a terrorist organization only after Jan. 1, 2014 — just a week after the Gulen-affiliated police and prosecutors opened a corruption investigation into key government figures.)

It is fair to say that the Gulen movement has much to account for in regard to its covert presence in the Turkish police force, judiciary and bureaucracy, and some of its members should indeed be tried for abuse of state power. But to treat the entire movement — which includes schools, kindergartens, nongovernmental organizations, charities and media outlets — as a terrorist organization has no legal basis. It is rather an act of political vengeance and a crackdown not much different from that on the nonviolent Egyptian Muslim Brotherhood by President Abdel Fattah al-Sisi's regime.

Furthermore, the confiscation of Zaman — and before that, Bugun and Milliyet — is not just an attempt to destroy of the Gulen movement, but part of efforts to subdue the entire Turkish media.

This situation has been going on for years now, but involves more subtle techniques than court orders and police seizures: financial measures. They typically start with the boss of a newspaper facing new economic challenges that originate in Ankara. As a result, the newspaper is sold to someone else, who then turns out to be a very close friend of Erdogan. Or the newspaper accepts handing over control to a "general manager" who is approved by the Turkish leadership. Consequently, the newspaper turns either mildly or zealously pro-Erdogan and fires the editors, reporters and columnists who displease the president and his men. At least seven major newspapers have been transformed in this way in the past seven years.

Even Islamist papers do not escape this suffocation if they are not solidly pro-Erdogan. Such was the case of Dirilis Postasi, whose key writer, Hakan Albayrak, displeased Erdogan with his pieces that, while praising the president as "the chief," offered some constructive criticism. Soon, the companies that ran advertisements in Dirilis Postasi were encouraged by powerful people in Ankara to withdraw all advertising, Albayrak reported. Soon after that, Albayrak was fired.

So in the grand scheme of things, not just a few newspapers like Zaman, but the entire Turkish press is being taken over by the current regime. This is a regime that insists that democracy is about nothing but elections, and the winner of elections — as the embodiment of the "national will" — has the right to dominate every aspect of society.