The journalists of Turkey’s only all-female media outlet, the Kurdish agency JINHA, challenge male dominance in both their society and their profession, braving the harsh realities of a war-torn region. 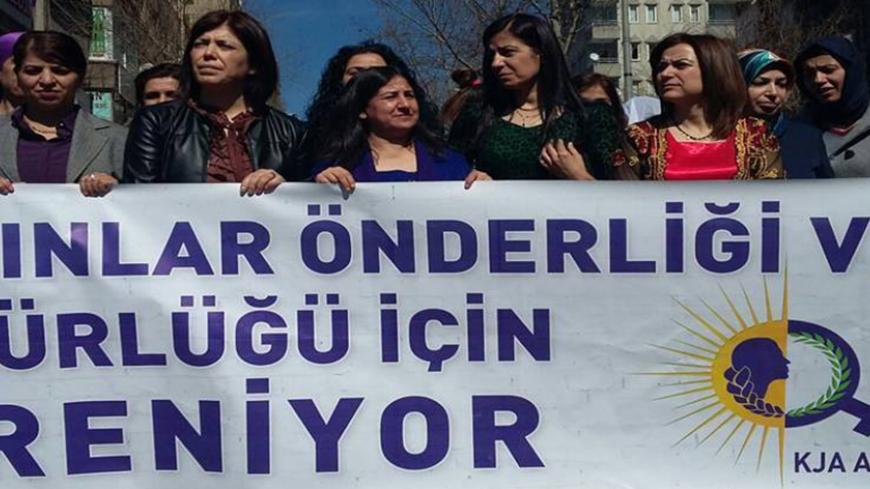 On a recent morning in a newsroom in Diyarbakir, six young women sat around the table, discussing the news agenda for the day. “At 10 a.m. a group of women will march to the district of Sur, which is still under curfew, and at 12 p.m. families unable to take the bodies of relatives killed in Sur will make a press statement,” the woman leading the meeting said before moving on to other items on the full agenda. She then proceeded to give assignments to the staff members. “Medine, you follow the families,” she said. “And you two go to the town of Kulp to see what’s going on there.”

This morning meeting may look similar to others in newsrooms across the country, but one thing makes it unique: All the journalists around the table are women. Jin News Agency is Turkey’s only all-female media outlet, and offers coverage in Kurdish, Turkish and English. “Jin” means "woman" in Kurdish.

Founded in 2012 in Diyarbakir, the agency — better known by its acronym JINHA — has offices also in big cities such as Ankara, Istanbul and Izmir, as well as correspondents in a number of smaller provinces. The staff totals about 60 people, including volunteers.

“Even our driver was a woman, but she left. We will hire a new driver as soon as we find a female one,” one of the journalists told Al-Monitor as they moved to the kitchen for a quick breakfast, which they prepared themselves. With the breakfast over and dishes washed, the reporters set to work, checking cameras and microphones — as well as hair and makeup — before going out on their assignments.

Editor Dilan Karamanoglu stayed behind, along with two other colleagues running the video editing desk. Speaking to Al-Monitor, Karamanoglu stressed that the all-female staff was not the only thing that made JINHA unique. The agency, she explained, focuses on women in its coverage and even in its sourcing of news.

“JINHA is the only agency of its kind in Turkey, but in the world, too, we are different from our counterparts. We could perhaps say we are the sole example in this sense,” Karamanoglu said. “Our reporting is focused on women, also because we prefer female news sources in any field, from judicial issues to the health realm. The words of women carry more weight for us.”

JINHA, she said, was created “to showcase the unrecognized endeavors of women” in a male-dominated society, where patriarchal traditions and social codes remain strong. “Even when we cover ordinary events, we strive to highlight whatever is there in terms of female visibility,” she said. “If a woman takes the floor during an ordinary press conference, for instance, we give precedence to what she says.”

JINHA is the product of a strong trend of female emancipation and activism that the Kurdish political movement has spurred in Turkey’s southeast over the past several decades. Gender equality appears prominently on the Kurdish agenda, and women are omnipresent in the forefronts of Kurdish political life, where a system of male-female co-chairmanship is meticulously followed in various fields and positions. And when covering the Kurdish political elite, including the local mayors, JINHA makes no exceptions. Karamanoglu said, “The female co-chair takes priority — absolutely!”

Al-Monitor caught up with Medine Mamedoglu, one of JINHA’s camerawomen, out to cover the press conference of the families struggling to get the bodies of their dead relatives. When she arrived at the venue, her male colleagues had already set up their cameras. Mamedoglu is a sports reporter, but on busy days she covers other events as well. After setting up her camera, she told Al-Monitor about her work with JINHA and the difficulties she faces.

“Everyone at JINHA is female. This gives you strength. You feel something different, even by simply being in the office. And when you go out in the field, working among the male journalists, you realize the meaning of female solidarity,” she said.

As a female journalist in a patriarchal and conflict-torn region, she has to deal with both male colleagues and the police. “There are a handful of female journalists in the region. The mentality of this country is already patriarchal, and the male journalists tend to ignore us in the field,” she said. “They think that we can’t cope with this job, that we can’t film the images they film. They always want to be in the front and have the best footage, thinking we’ll accept that. But we’ve proven ourselves with the coverage we produce. We often have the best footage, showing them how a woman can report.”

Mamedoglu said that JINHA’s reporters also face mistreatment and derision from the security forces. “Sometimes we hear insults or jokes accompanied with sardonic smiles,” she said. “They too wonder how a woman could be a news reporter. Sometimes they tell us to go home to cook and clean.”

JINHA’s unpleasant encounters with the police go beyond verbal hostility. Two of the organization's reporters remain behind bars for “supporting terrorism,” a charge that many journalists and sympathizers of the Kurdish movement have come to fear in Turkey.