Imprisoned over her painting of the destruction of Nusaybin, Kurdish Turkish journalist and artist Zehra Dogan continues to produce provocative art that is smuggled to the world outside. 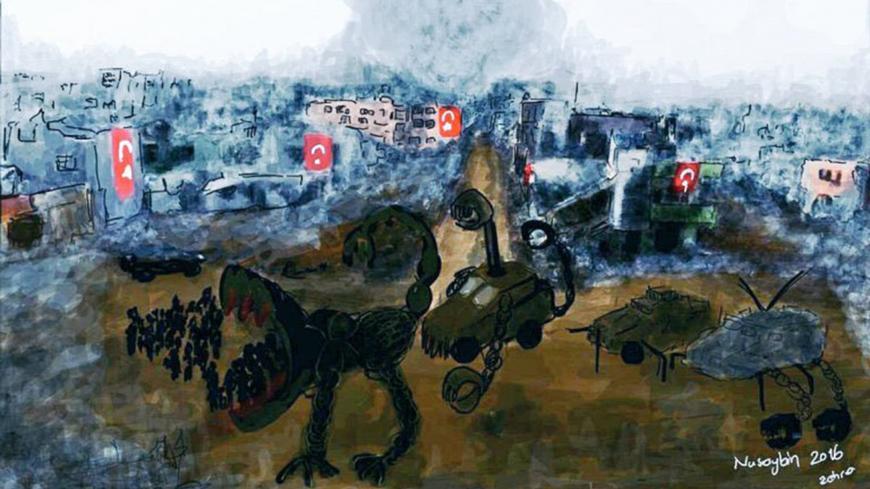 A painting by Kurdish journalist and artist Zehra Dogan depicts the stylized destruction by Turkish security forces of the Kurdish town of Nusaybin in 2015. - Zehra Dogan

In authoritarian states, artistic expression is an oft-trodden path for expressing dissent. And so Zehra Dogan, a young Kurdish artist and journalist, took to the easel to pour out her emotions about the 2015 leveling by Turkish security forces of Nusaybin, a Kurdish town intertwined with the Syrian town of Qamishli on the opposite side.

In the foreground of her best known piece, an armored vehicle is portrayed as a dark, menacing scorpion-like creature. Humans file resignedly into its gaping jaws. Turkish flags hang over gutted buildings and a giant plume of smoke billows overhead in a perfectly evoked dystopian scene.

The painting and media posts Dogan shared as she covered the violence between Turkish security forces and armed Kurdish youths affiliated with the outlawed Kurdistan Workers Party (PKK) for the shuttered all-female Jinha news agency landed the 28-year-old in jail in July 2016.

Like other towns in the southeast, where the PKK recklessly drew in the army, Nusaybin was under a round-the-clock curfew, leaving hundreds of terrified families trapped in their homes without access to food, water or medical help. Rights groups say civilians were shot dead by the security forces. Young militants' corpses were left to rot on the streets for days. Public fury lashed out not only at the state but also at the PKK. Dogan focused on the plight of the local children, sharing their fears and their pain.

She was charged with membership of and propagandizing for a terrorist organization. The first charge was dropped and she was freed 4½ months later. But when prosecutors upheld the propaganda charges, Dogan was rearrested and began serving a prison sentence of two years, nine months and 22 days in Diyarbakir, the largest city in the mainly Kurdish southeast region.

In its ruling, the court declared, "The defendant photographed a scene in Nusaybin and painted Turkish flags on destroyed buildings. It is clear that the painting is against the operations that were conducted as a result of the PKK terrorist organization's violence."

In a deleted tweet, Dogan riposted that she was punished "only because I painted Turkish flags on destroyed buildings. However, [the Turkish government] caused this. I merely painted it."

“They gave her the stiffest sentence they possibly could,” said Kamuran Tanhan, one of Dogan’s lawyers, in a telephone interview with Al-Monitor.

Figures vary, because for every journalist who is freed another is jailed soon after. But with at least 100 media workers behind bars, Turkey retains the title of the world's biggest jailer of journalists. Today, for example, two reporters for the now banned pro-Kurdish Ozgur Gundem newspaper were released. But according to monitoring groups, 12 journalists were detained, 11 convicted and four arrested in October alone.

The cases of Ahmet Sik, the intrepid investigative reporter for the opposition daily Cumhuriyet whose trial resumed today, and of Deniz Yucel, a Turkish-German journalist who has been held in pre-trial detention since February 2017 accused of being a German spy and PKK operative, have received global attention.

Dogan’s plight has elicited a softer outcry in the English-language press. But in France, her fame is slowly spreading thanks to a roving exhibition of her paintings and a book dedicated to her called “Eyes Wide Open: Journal of a Condemnation, Chronicle of an Exhibition.” The volume, which contains excerpts from a journal and letters she wrote in prison, highlights her artistic genius and professional courage. Kedistan, a nonprofit web magazine, is promoting the book.

In the letters, Dogan, who won Turkey’s prestigious Metin Goktepe award for her searing accounts of the torment of Yazidi women in Islamic State captivity, describes her own conditions and a stubborn determination to keep on drawing. Tanhan declined to disclose how they made their way out of prison undetected by the notoriously draconian guards.

“Even the barred windows are covered over with barbed wire. Every night two stars appear in the sky. To see them, I climb toward the window. But this time, the barbed wire cuts off the view," Dogan writes. “I draw constantly in my head. I transform the slightest form. I draw on newspapers. I write stories.”

Prison authorities refuse to give Dogan painting supplies, but the deprivation has only sparked a fresh bout of creativity. She says she uses her fingers as brushes and crushed parsley for green, olives for black and turmeric for yellow. When she saw the feathers of a pigeon flutter through a vent, Dogan began collecting them and finally assembled enough to fashion a brush. Ballpoint pens and honey helped her produce eight new collages that were also somehow spirited out of prison and published online.

Ceren Karlidag worked with Dogan for Jinha until it was taken offline by the Turkish government in the first of a slew of decrees that followed last year's failed coup. She told Al-Monitor, “Zehra is every bit as passionate about reporting the truth as she is about her art. She is unique in every respect.”

Tanhan described how Dogan had drawn on the backs of fellow inmates who were recently freed. “Her will to illustrate is extraordinary,” he said.

Evrem Kepenek, a respected freelance reporter based in Diyarbakir, is among a band of female journalists lobbying to secure Dogan’s release. She told Al-Monitor, “Zehra is misunderstood in these lands but when peace returns, Zehra’s paintings will be exhibited in museums of repentance for all the sins committed here.” The proceeds from the sales of her work go to the war-affected families in Nusaybin. “She will not accept a single penny for herself,” Kepenek said.