TIMELINE: Key players reflect on US policy in Syria

In this interactive timeline, US lawmakers and former administration officials open up about their failure to prevent disaster in Syria. 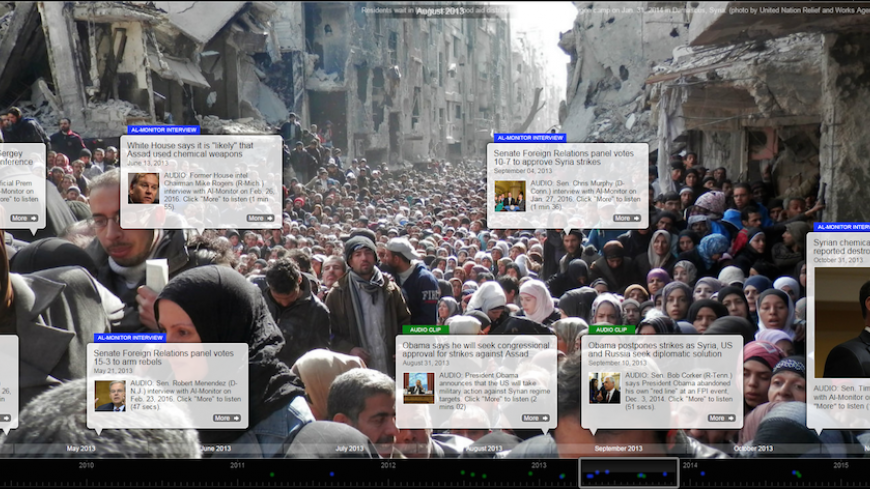 President Barack Obama's legacy in Syria is one of undelivered promises and red lines crossed, according to Al-Monitor interviews with more than a dozen US decision-makers.

On the eve of the five-year anniversary of the 2011 uprising, lawmakers and former administration officials shared their reflections on the key moments that have shaped recent US policy in Syria. They paint a picture of a president who hoped to guide events on the ground but was never willing to commit the full weight of America's military and diplomatic arsenal to get his way.

A timeline of US policy in Syria. Click here for a full screen (best viewed on desktop or tablet).

The bitter fruits of the world's failure to end the Syrian slaughter — more than 250,000 dead and the worst refugee crisis since World War II — are well known. To mark the anniversary, Al-Monitor is releasing an interactive timeline featuring exclusive audio interviews with 14 key players that shed light on the main US policy inflexion points, from the half-hearted support for the Syrian opposition to last month's cease-fire agreement with Russia. The timeline, interspersed with key pronouncements from Obama and other top officials, runs for a little more than 30 minutes.

At the root of the Obama policy's failure, argues former Ambassador Ryan Crocker, was the mistaken impression that Bashar al-Assad would be as easy to dislodge as other dictators felled by the Arab Spring. As ambassador to Syria, Crocker had formed firsthand impressions of the Syrian regime's "near-perfect police state" in one-on-one discussions with the future Syrian leader in the late 1990s, but no one in the administration asked for his opinion before announcing that Assad had to go.

"It's Diplomacy 101: Never set a policy if you don't have the means to achieve it," Crocker told Al-Monitor. "That was a policy based on hope, which we all know is a fairly idiotic concept."

The Aug. 18, 2011, pronouncement was followed by a series of efforts to train, equip and later arm Syrian opposition forces in a gambit to strengthen their hand in negotiations over a political settlement. But the effort was hamstrung from the beginning by the absence of a safe zone where they could be trained in bulk instead of piecemeal, and Assad refused to make any concessions.

"Help to the opposition has always been kind of half-hearted," said Robert Ford, who was ambassador to Damascus from 2011 to 2014. "And, by contrast, the Iranians and Russians have not been so half-hearted."

Then came Obama's red line on chemical weapons, and his threat to finally bomb Assad. While the president has earned kudos for getting Assad to turn over most if not all of his arsenal, lawmakers and administration officials alike argue that failing to go through with the strike sent an unmistakable signal that Obama was keen to avoid military confrontation.

Now the United States and Russia are negotiating a cease-fire that critics say will keep Assad in power for the foreseeable future while moderate rebels continue to lose ground to the Islamic State and other radical groups.

"The strong backing of Russia and Iran have allowed him to hang on to power," House Foreign Affairs Chairman Ed Royce, R-Calif., told Al-Monitor, "and the administration has drawn so many red lines and backed away that it no longer has the leverage — or the will — to make him go."