US diplomats cast doubt on America’s ability to constrain Iran

With the Donald Trump administration poised to announce a more confrontational stance, career diplomats fear it could be too late to contend with a rising Tehran. 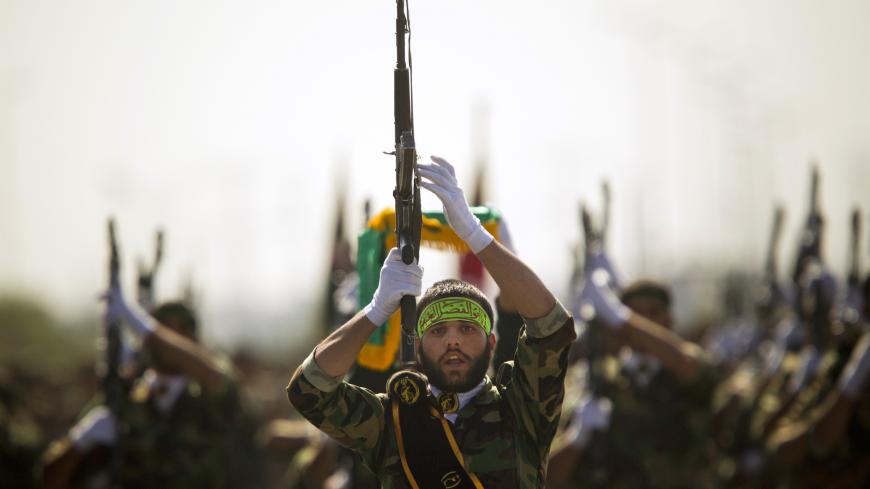 Members of Iran's Basij militia march during a parade to commemorate the anniversary of the Iran-Iraq War (1980-88), in Tehran, Sept. 22, 2010. - REUTERS/Morteza Nikoubazl

As part of his push to revisit the 2015 nuclear deal later this week, US President Donald Trump is expected to unveil a broader plan to roll back Iranian influence across the Middle East.

Former US diplomats posted to the region, however, are deeply skeptical that the United States can come out ahead in a geopolitical confrontation with Tehran. While the White House has expressed frustration with the gains made by Iran-backed Shiite groups in places such as Iraq, Syria and Yemen, three US ambassadors warned that changing the situation on the ground would be costly and difficult to achieve.

“I see no good options vis-a-vis Iran in Iraq or Syria,” former US Ambassador to Iraq and Syria Ryan Crocker told Al-Monitor. “They’re not going to be easily persuaded, and I don’t think we have the wherewithal to push them out.”

Trump has made no secret of his disdain for the nuclear deal negotiated by his predecessor, which he argues has constrained America’s ability to confront Tehran on a range of other issues such as its ballistic missile program and support for proxy forces. He is widely expected to refuse to certify that the deal is in America’s national security interest ahead of an Oct. 15 deadline and to ask Congress to consider more sanctions while stopping short of pulling out of the Joint Comprehensive Plan of Action (JCPOA).

“The president isn’t looking at one piece of this. He’s looking at all of the bad behavior of Iran,” White House spokeswoman Sarah Huckabee Sanders told reporters last week. “Not just the nuclear deal as bad behavior, but the ballistic missile testing, destabilizing of the region, No. 1 state sponsor of terrorism, cyberattacks, illicit nuclear program.”

Many experts have yet to be convinced that Trump really has much of a plan beyond voicing his displeasure. He had been expected to lay out an Iran strategy today, but those plans appear to have been delayed by internal dissension among his national security team, including on whether to designate the Islamic Revolutionary Guard Corps (IRGC) as a terrorist group.

“I have not seen any indication that there is a concrete, a discrete Iran policy,” said former US Ambassador to Iraq and Turkey James Jeffrey, now a fellow at the Washington Institute for Near East Policy. “We’re helping the Saudis in Yemen, but apart from the president reviewing the JCPOA, there isn’t a policy.”

If anything, Trump’s tough rhetoric on Iran dating back to the early days of his administration appears to only have emboldened Iran. Casualties of Iranian proxy forces in Syria have jumped in recent months, while Iran has created a number of militias that don’t answer to Baghdad.

Meanwhile, Iran has continued to provoke US troops in the region throughout Trump’s first nine months in office. In August, an Iranian drone buzzed a US fighter jet near an aircraft carrier operating in the Gulf, which the Pentagon deemed the 13th unsafe interaction between Washington's and Tehran’s navies this year.

At the same time, the United States last month abandoned Al-Tanf base in Syria, once a training center for Arab rebels aligned against Bashar al-Assad's regime. The move came as Iranian-backed Shiite and Hezbollah fighters were operating nearby, provoking fears of a possible clash.

“It’s going to be hard. It’s going to require patience. What the Iranians — like the Syrians — have learned is that they can wait us out,” said Crocker, who served as the top US diplomat in Lebanon, Kuwait, Syria and Pakistan before coming to Iraq amid the 2007 US troop surge. “We will not stand up to them. It’s up to the administration. Are we going to push back, or are we just going to let it rock along?”

It’s not clear whether the Trump administration plans to keep a permanent military presence in the region aimed at deterring Iran.

When the president visited Saudi Arabia in May, he agreed to help Gulf Cooperation Council countries deter Iran. But it’s unclear if that effort will gain traction with the Gulf embroiled in diplomatic strife over Qatar’s challenge to the status quo.

Earlier this summer, the administration requested — and the Senate granted — authority for US forces to build temporary facilities in Iraq and Syria to help defeat the Islamic State (IS). It remains unclear, however, if the US presence will be extended to counter Iranian influence after the final defeat of IS.

“I think a permanent Iranian presence in Syria is unavoidable,” Robert Ford, a former US ambassador to Syria, told Al-Monitor. “The only way to get it out is to attack it on the ground.”

“The one force that really had a chance to limit Iranian growth was predominantly Sunni opposition, and it’s not coming back,” said Ford, who resigned in 2014 out of frustration with the Barack Obama administration’s limited support for the Syrian opposition. “It’s two years too late.”