What Russia won by withdrawing from Syria 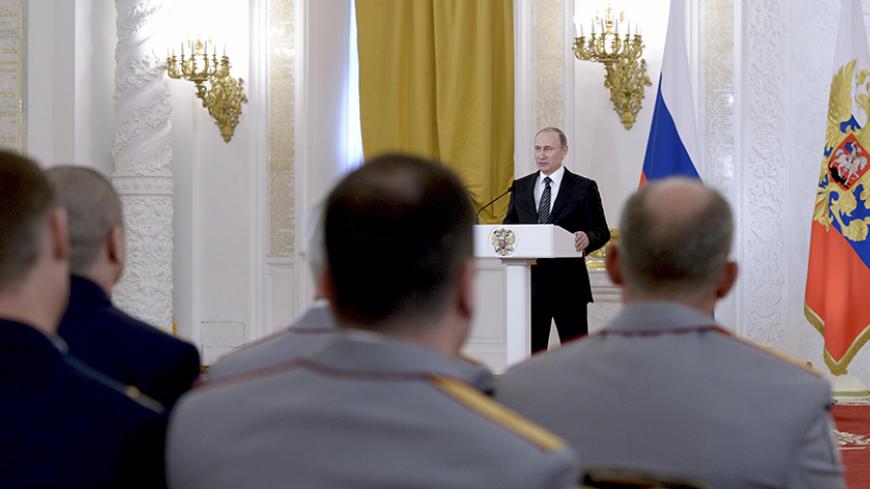 Russian President Vladimir Putin delivers a speech during an awarding ceremony for soldiers returning from Syria, at the Kremlin in Moscow, March 17, 2016. - REUTERS/Alexei Nikolsky

Russian President Vladimir Putin presented medals on March 17 to armed forces personnel who distinguished themselves in Syria, congratulating the gathering of 700 military men and women and members of the defense industry for contributing to what the Kremlin is hailing as a victorious campaign in Syria.

“The struggle against international terrorism is a fair and righteous cause. This is a struggle against enemies of civilization, against those who effect barbarity and violence,” he said at the Kremlin ceremony, according to his prepared remarks later made available. “Our country has demonstrated its unquestionable leadership, willpower and responsibility.”

Putin outlined Russia's three major achievements. First, “We did not let this terrorist tumor grow; [we] destroyed the bandits’ hiding places and munitions depots and blocked oil-smuggling routes that brought the terrorists their main funding,” he said.

Second, “We strengthened [Syria’s] armed forces, which are now capable of not only holding back the terrorists, but also of conducting assault operations against them. The Syrian army has gained the strategic initiative and continues clearing its land of terrorists.” Third, Putin said, Russia created the conditions necessary for peace by establishing cooperation with the United States and other countries and forces seeking peace in Syria who realize that the only solution is a political one.

In actuality, determining whether Russia’s mission was a success depends on one’s initial expectations. Russia’s involvement clearly altered the trajectory of the Syrian civil war, but only as far as it served Russia’s own interests, not those of Syrian President Bashar al-Assad. Once Moscow felt it had achieved most (if not all) of its political goals, the Kremlin assessed that there wouldn’t be a better time to leave. The drawdown was probably coordinated. Moscow had invested too much in its image as a reliable patron to then make decisions that would affect its tentative allies without notifying them. In this case, however, “coordinated” means Assad was most likely informed of the decision, not consulted, before it was announced.

There are reasons to assume Assad wasn’t particularly happy with the withdrawal, but a combination of Russia’s guarantees and its growing irritation with his inflexibility left him virtually no choice but to take it or leave it. Putin said Russia will continue to provide “comprehensive support” for Syria, including financial aid, weapons, military training, planning and intelligence, as well as direct support, including airstrikes.

“If necessary, of course, Russia will be able to enhance its forces in the region in a matter of hours to a size required for a specific situation and to use all the options available,” Putin said. He made clear, however, that Russia would prefer not to have to escalate, apparently setting ground rules for Assad to maneuver within but not exceed.

The Russians are not withdrawing entirely, and that, too, is supposed to provide some degree of assurance for Assad. The S-400 anti-aircraft weapon system will remain, and both the air base in Khmeimim and the naval facility at Tartus will remain operable, with about 1,000 Russian military personnel in the country.

Putin’s decision, regardless of what one thinks of it, leaves the impression that other possible scenarios could have turned out ugly for the Russians. Many expected an Afghanistan-style quagmire or a protracted Sunni-Shiite standoff or a head-on collision with Turkey as a NATO member. Any of these events would have been politically, socially and economically expensive for Putin.

The disastrous experience the Soviets had in Afghanistan taught Moscow to leave the fight before it gets too messy. Putin’s favorite maxim seems to be, “If the fight is inevitable — strike first.” In the case of Syria, he might also have been considering another bit of political wisdom: The sooner you leave a fight as a competitor, the better your chances of later becoming a referee.

Putin now holds an important position for the shaping of a political transition in Syria. Russia acquired the air base in Khmeimim, which it did not have before. Its geopolitical standing is secured as a power broker in the Middle East, while its weapons are in great demand across the region. The global outreach is incredibly important as well. Some would even argue it was central to the idea of the operation from the very beginning. In addition, Russia showcased its military might, sending signals to those who might have been tempted to put it to the test.

Russia also excelled on the public relations side of the art of modern war. Detailed daily reports from the Defense Ministry, accompanied by high-definition maps and video footage, prevented opponents from manipulating its campaign results in the media.

Even if Moscow doesn’t save Assad’s presidency, his departure will be a negotiated event, not forced, an important element for Putin personally and for Russia’s vision of its role in contemporary international affairs.

In the short term, Russia’s partial withdrawal will hopefully have a positive effect on the conflicting parties, increasing what Putin called “trust of all participants in the Geneva process.” In the long run, it may also open up a new (hopefully final) chapter in Syria's five-year civil war. It gives local players an opportunity they claimed to have longed for — to get serious about deciding the country’s political future and ultimately carry it out. It nudges the big regional players, Iran and Saudi Arabia, into suddenly having to revise their policies to retain influence.

For Moscow, the decision to drawdown forces bears some political risks as well, since its leadership is now pinning its hopes on the conflict shifting to the political arena. This first requires that Assad be more cooperative, and also that other groups — from the opposition to the Kurds and regional powers — be similarly willing to negotiate and make concessions if necessary.

There are ample arguments to support both optimistic and pessimistic outcomes. Although Russia’s presence might no longer be a deterrent to certain local forces that want to disturb the fragile balance, Russia will always be part of the equation. Taking into account the unconventional diplomatic moves and actions on the ground that have become characteristic of Russian policy in recent years, it will be harder for those who might act against Russian interests to forecast what Moscow’s response might be and how far it will take matters.

There is a lot for all the stakeholders in Syria, including Russia, to work on jointly down the road — i.e., achieving and preserving unity in Syria, forming a coalition government and reconstructing the country. The Russian military mission may be over, but the job is still far from finished.