Opinions vary about the repercussions and motives behind Russian President Vladimir Putin’s partial withdrawal of Russian forces from Syria. 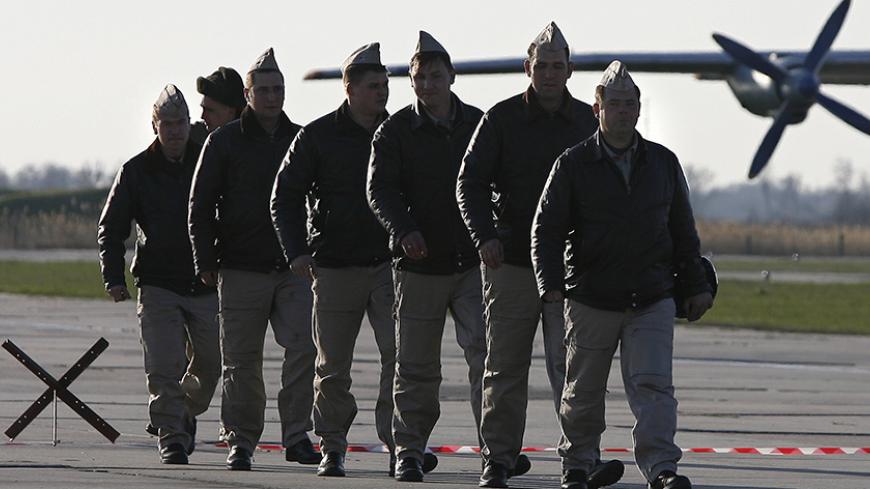 Russian air force pilots walk on the tarmac upon their arrival at an air base in Russia's Krasnodar region from Syria, March 16, 2016. Russia's surprise withdrawal continued as a second group of Russian warplanes flew out of Russia's Khmeimim air base in Syria. - SERGEI VENYAVSKY/AFP/Getty Images

Political leaders and Syria watchers are at odds over the impact of the partial withdrawal of Russian forces from the war-torn country and what kind of dynamics it could bring to the chaotic scene there.

In a surprise announcement on March 14, Russian President Vladimir Putin declared that the major part of his country's forces would be pulling out of Syria because Moscow had succeeded in enabling Syrian government forces and their allies to turn the tide of the conflict in favor of the regime. Last September, Russia had deployed fighter jets and warships, as well as some of an expected 4,000 troops to protect its military installations and assist government forces. It also deployed advanced S-400 missile defense systems in November after Turkey shot down a Russian warplane allegedly for having crossed into Turkish airspace.

Salih Muslim, co-leader of the Democratic Union Party (PYD), which administers much of northern Syria, including the Kurdish-dominated areas, told Al-Monitor that the Russian withdrawal will be positive for the country.

“It will help with the resolution process,” he said, referring to ongoing efforts to broker a deal between the regime of President Bashar al-Assad and armed opposition groups. “It will pressure the Syrian regime … and create some trust. The Russian intervention had strengthened the regime.”

PYD-affiliated forces are believed to have cooperated with the Russian military in parts of northern Aleppo in wrestling control of territory from rebel groups backed by Turkey. Muslim said the drawdown of Russian forces will not affect the Kurdish areas the Kurds refer to as Rojava.

While Putin's decision to draw down Russian forces has prompted speculation about the Kremlin's motives, it is the impact of the withdrawal that matters most. Even after Putin's announcement, Russian warplanes have continued to conduct nearly two dozen sorties a day against rebel positions, Russian military officials report.

Some observers believe that Putin has achieved his ultimate goal of appearing to have stabilized Assad's regime, which looked to be on the losing side of the Syrian equation before Russian intervention. Joseph Bahout, an expert with the Carnegie Endowment for International Peace, drew attention to the possible consequences of the partial Russian withdrawal.

“What is sure, I think, is it will reopen the way for other actors to step in, mainly the Iranians, the Turks and the Saudis,” Bahout told Al-Monitor on the sidelines of the Sulaimani Forum, a two-day event in Iraqi Kurdistan's second-largest city, Sulaimaniyah, where many regional officials, diplomats and experts had gathered to debate the pressing issues of the Middle East. “The Iranians, because they would probably want to support the regime much more than before. And the Turks and Saudis could feel the absence of Russia [means] greater leeway for them to be present in the theater. Now, to do what, this remains an open question.” Bahout also asserted that if the Assad government continues with “its stubbornness and not wanting to make concessions, we will probably see an upgrade of military action against the regime."

Prior to Russia's military intervention, Turkey had played an important role in shaping events on the ground in Syria. The spat with Moscow over the downing of the Russian fighter jet, however, severely restricted Ankara's maneuverability and influence in this regard. While some might expect that a reduction in Russia's military presence in Syria would open a window of opportunity for Turkey, others don't see it that way.

Saban Kardas, director of the Ankara-based Center for Middle Eastern Strategic Studies, which is considered pro-government, believes there isn't much room for Turkey to re-engage in Syria in the way it did in the past. “The main Russian air defense systems will be there and not much will change for Turkey,” Kardas told Al-Monitor. “What this new development means is that perhaps the regime will not be able to advance much further.”

At the height of Russia's intensive air campaign in Syria, Assad and his slew of allied forces — consisting of Iranian troops, fighters from Lebanese Hezbollah and Iraq and foreign paramilitary forces — managed to recapture strategic territory near the western Alawite stronghold of Latakia, in northern Aleppo and Hama province. Those gains were seen as having helped to stabilize the beleaguered regime in Damascus.

If the withdrawal means fewer airstrikes against areas under the control of opposition forces, Kardas said, then there is something for Europe and Turkey to look forward to — possibly fewer refugees. “However, this Russian withdrawal won't mean the end of the conflict,” he cautioned.

Hayder al-Khoei, a fellow at the London-based Chatham House, said part of the reason Russia decided to withdraw some of its forces was to compel Assad to offer compromises for the sake of a peace deal with the rebels. Putin's announcement of the withdrawal came as a new round of peace talks convened under the auspices of the United Nations in Geneva.

A certain measure of pragmatism, Khoei said, appears to have guided the Russian decision for partial withdrawal. “Part of the decision to leave was not to do what the Americans did or the Saudis are doing in Yemen, thinking that it's just going to take two to three months, and then you get entangled [and then it's] a year, two or 10 years,” Khoei told Al-Monitor. “The Russians were very strategic about this. They have an air base now, which they didn't have [before] … and it's not a complete withdrawal now, so anything else that happens that threatens Assad, they can come back,” he said.