Will expelling families of Palestinian attackers to Gaza stop terror?

A proposal to expel the families of Palestinians who attack Israelis to Gaza could motivate relatives remaining in the West Bank to commit revenge attacks. 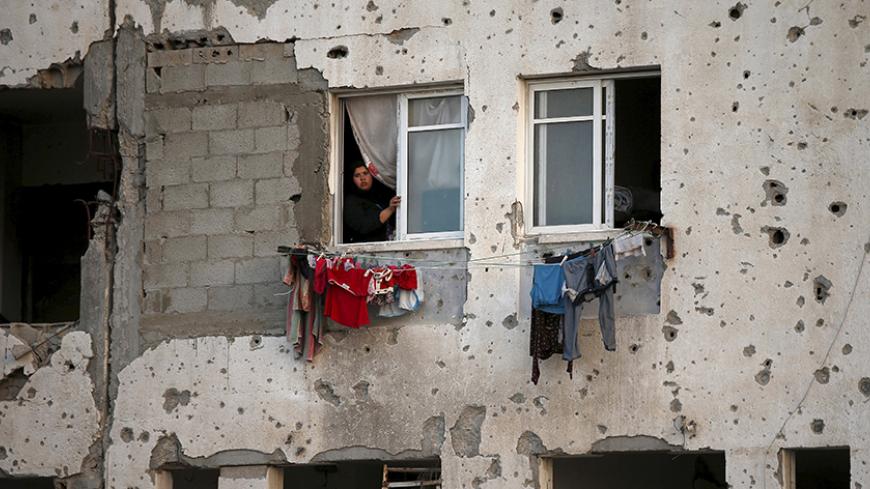 A Palestinian woman looks out of her apartment in a residential building, heavily damaged by Israeli shelling, in Beit Lahiya town in the northern Gaza Strip, May 25, 2015. - REUTERS/Suhaib Salem

Expel to Gaza the families of Palestinians who attack Israelis. That is Prime Minister Benjamin Netanyahu’s latest proposal to combat the third intifada and dissuade possible future assailants. On March 2, the Prime Minister's Office asked Attorney General Avichai Mandelblit to examine the legality of such expulsions, or perhaps more properly, to “whitewash” them.

In the letter, which the Prime Minister’s Office released to the media, Netanyahu explained, “I believe that using this tool would result in a significant reduction in the number of terrorist attacks against the State of Israel, its citizens, and its residents.” Why was the request to the attorney general provided to the media? It is not clear. Was the Prime Minister’s Office trying to put pressure on the attorney general, who seems to oppose any collective punishment that might not pass muster with the Supreme Court? Might Netanyahu be trying, yet again, to show the Israeli public that he has more effective methods to stop the wave of terrorism but is being hindered by the legal system?

Regardless, the proposal to expel the families of attackers as a form of collective punishment had been raised by the security forces as early as November 2015, in response to the stabbing attack in the Etzion settlement bloc in which Hadar Buchris was killed. According to security sources, the investigation of the incident revealed that the assailant’s mother knew that he was planning to launch the attack but failed to prevent it or report him. This became the basis of the proposal to include the families of terrorists in the circle of punishment and deterrence.

In October, when the current intifada began, the defense establishment had offered several proposals on how to combat the wave of terrorism. At the time, the specific characteristics of the intifada were unclear, and the main concern was that various armed Palestinian groups, such as Hamas, Islamic Jihad and Fatah’s armed wing, the Tanzim, might join it.

Today, after half a year of this intifada, it seems as if the security forces and the political class alike have a relatively clear picture of the situation. What stymies everyone is the simple fact that no one has any idea about how to stop the wave of terrorism and rein in disaffected young Palestinians. What the security forces do know, however, is what they should not do: They should not let tensions in the West Bank escalate, and they should not be adding fuel to the fire.

The policy of the Israel Defense Forces (IDF) is inspired by its chief of staff, Lt. Gen. Gadi Eizenkot. Eizenkot recently said that he doesn’t want to have a soldier empty his clip at a 13-year-old girl armed with a knife. Thus, the IDF has been filling the vacuum left by the political leadership: As reported in Al-Monitor in late February, the IDF proposed improving the Palestinian economy by increasing the number of work permits in Israel. In addition, it opposed grandiose operations in the territories and called for the bodies of Palestinian attackers to be returned to their families for burial. Given this record, it is hard to believe that the IDF and the rest of the security establishment are advocating the expulsion of attackers’ families to Gaza.

The “weapon” of expulsion had previously been tried as part of the prisoner exchange for the release of IDF soldier Gilad Shalit in 2011 to deal with freed Palestinians whom Israel refused to allow into the West Bank. Instead, these former prisoners were expelled to Turkey and other countries willing to take them. Some were sent to Gaza. As I wrote in Al-Monitor last July, just being in Gaza pushed these prisoners to plan more attacks and acts of revenge. What happened, in effect, was that they commanded terrorist networks in the West Bank from Gaza.

Similarly, the demolition of attackers’ homes is a controversial policy within the defense establishment. Defense officials had concluded during the second intifada (2000-2005) that the damage caused by this policy outweighed its usefulness. Today, with perpetrators of attacks unaffiliated with any particular group, the debate over the efficacy of destroying their homes has become much more intense. It is doubtful whether demolition really is an efficient means of preventing would-be terrorists from launching attacks in Israel. It could, in fact, encourage other family members or people in the families’ immediate circle to decide to launch their own revenge attacks.

The demolition of attackers' homes continues, with the political establishment having quelled the military establishment’s opposition. Netanyahu now seeks to expand the circle of punishment by expelling the families of the attackers to Gaza after their homes have been destroyed. If Netanyahu’s proposal is sanctioned and receives the courts’ seal of approval, Israel’s reputation could suffer irrevocably. Imagine the photos of women, children and the elderly whose homes were just destroyed being loaded onto army trucks under heavy military guard. The footage would be broadcast around the world, drawing unprecedented fire and claims of basic human rights violations. This kind of extensive media coverage would be like adding a barrel of gasoline to a fire already burning out of control.

Often, some family members of Palestinian attackers from the West Bank have a history of security violations. They would certainly have a motive for revenge. Concentrating them in Gaza stands in direct contrast to the predominant approach in the IDF focusing on the importance of reducing the motivations for terrorism, instead of increasing them. It could be a fatal mistake. Who is to say, for instance, that expelling the immediate family would not increase the motivation of extended family members remaining in the West Bank to take revenge by launching an attack?

The expulsion of families to Gaza could also cause serious problems for the Foreign Ministry, which, by chance, is also headed by Netanyahu. Ambassadors and their staff will have to contend with a world flooded with images of these families being torn from their homes. Worst of all, it is hard to imagine that Israel’s diplomatic representatives will have any plausible excuse to justify what is happening.