Israel's political and military establishments feel the need to "do something" to appease public opinion in the face of recent violence, but the situation calls for restraint, not excessive actions like the undercover operation at a Hebron hospital. 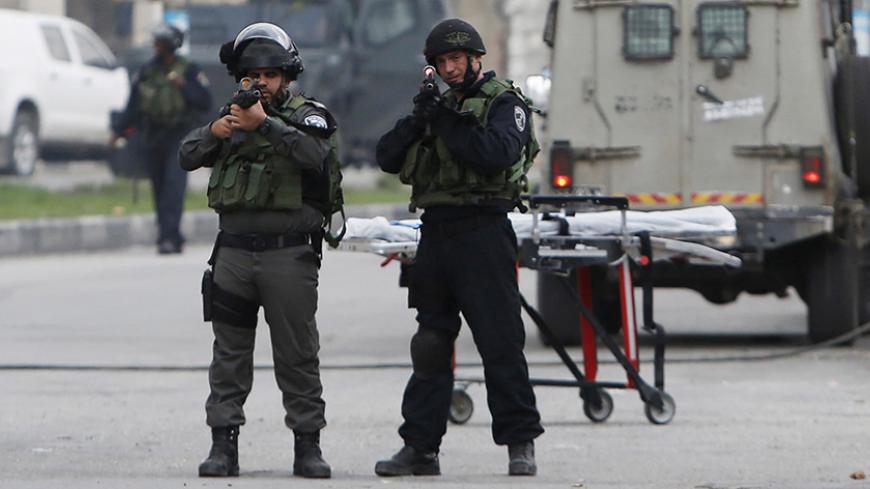 Israeli border police point their weapons as they guard the scene where a Palestinian woman was shot dead by Israeli troops in the West Bank city of Hebron, Nov. 6, 2015. - REUTERS/Mussa Qawasma

The Israeli media was, generally speaking, greatly impressed by the Nov. 12 plainclothes​ operation by an Israel Defense Forces (IDF) unit of soldiers disguised as Palestinians at the Al-Ahli hospital in Hebron. Their coverage lauded the operation, highlighted by images from hospital security cameras. “Reality triumphs imagination,” wrote Walla!, while Channel 2 proclaimed, “Coming full circle in a dramatic raid on a hospital.”

The operation in Hebron was developed and implemented to apprehend Azzam Shalaldeh, who on Oct. 25 carried out a stabbing attack in the Etzion settlement bloc, moderately wounding Yisrael Ben Aharon. Despite his injury, the victim was able to fire shots at his assailant, wounding him in the foot before he was able to flee the scene and seek care at Al-Ahli hospital.

The security cameras captured the arrival of the soldiers, posing as family members escorting a pregnant woman ready to give birth, supposedly wheeling her to the delivery room. The 20-strong unit, whose members sported beards and wore kaffiyehs, carried weapons concealed under their clothes and a blanket that covered the belly of the “pregnant woman.” Revealing themselves, the soldiers drew their guns in a surprise maneuver. They captured Shalaldeh in his room on the third floor. According to a statement by an IDF spokesperson, Abdullah Shalaldeh, a relative of the wanted man, was killed during the operation when he attacked unit members in trying to scuttle his cousin's arrest.

Jehad Shawar, Al-Ahli director, condemned the IDF operation inside the medical facility, arguing it was a flagrant violation of international law. Physicians for Human Rights also denounced the raid, stating, “Time after time, the security forces egregiously violate the special protection awarded to hospitals and medical facilities, thereby putting the patients, medical staff and visitors at risk.” According to the organization, since early October, more than 42 cases resulting in harm to medical staff have been recorded in the West Bank and East Jerusalem, including the forcible removal of wounded persons from ambulances as well as raids at hospital. Also in October, the organization sent a letter to Defense Minister Moshe Ya'alon, Health Minister Yaakov Litzman and Maj. Gen. Yoav "Poli" Mordechai, coordinator of government operations in the territories, protesting Israeli violations of the rules of medical neutrality.

The current wave of attacks in Israel has been ongoing for almost six weeks, yet for the moment, the IDF remains without a solution for countering this “knifing intifada.” It is questionable whether Shalaldeh's arrest, which looks like a dramatic scene from an action movie, truly serves the main objective, namely, bringing about calm.

The Israeli defense establishment views Shalaldeh and other assailants that the IDF has located, or has tried to apprehend, in hospitals in Jerusalem, Nablus and Hebron as “small-fry terrorists.” This does not, however, mean that they should get off scot-free. Indeed, efforts should be made to apprehend them and have them brought to trial in Israel, but discretion should also be used. International laws should not be trampled and unnecessary risks taken.

These attackers are nothing like the arch-terrorist Mohammed al-Deif, the leader of Hamas’ military wing who is responsible for the deaths of hundreds of Israelis and who for more than 20 years has eluded Israeli intelligence, which has been trying in vain to kill him. It is not an operation aimed at stopping an imminent, “ticking bomb” attack, therefore warranting a daredevil operation in a sensitive civilian environment, such as the raid on the Hebron hospital.

Shalaldeh's identity and address were obviously known, so he probably could have been arrested after his discharge from the hospital without having to resort to a bold operation. Not only did entering Al-Ahli hospital constitute a violation of international law and medical ethics, it was also an unnecessarily excessive operation that seemed not to have taken into account unforeseen complications inside a medical facility potentially resulting in the wounding of innocent civilians. The results could have been calamitous. After all, women, children, babies and the elderly are hospitalized there, including women about to give birth.

The desire to carry out an ostentatious operation to prove to the Palestinians — and probably also to the Israeli public — that no attacker will escape punishment, trumped common sense, thus contradicting the IDF’s own working premise that refuses to accept that we are in the middle of an intifada. While the IDF has no broad, clearly defined objectives for dealing with the escalation and violence, it appears that the military and the political establishment believe that they cannot afford to be perceived as failing to respond.

During the first months of the second intifada in 2000, the IDF set up a “target bank” to cope with the escalation. The targets in the West Bank soon ran out, meaning that more targets had to be found to mollify the Israeli public, which was clamoring for a military response. As a result, the Gaza Strip became Israel's “punching bag,” as Brig. Gen Shmuel Zachai, then-commander of IDF forces in Gaza, described it (in Shlomi Eldar's 2005 book, “Eyeless in Gaza”). Gaza had numerous targets that could be pummeled, so even when a Palestinian attack took place in the West Bank, the IDF responded in Gaza. We all know the outcome: Israel’s military actions emboldened Hamas. The rest is history.

Now the IDF and the political establishment again feel the need to respond. The feeling again is that they can’t just be on the defensive and must therefore punish perpetrators by striking back. This is why the so-called deterrent of demolishing the homes of attackers was selected along with dramatic raids by plainclothes units. Such measures, however, are more than that. They are also aimed at mollifying the Israeli public.

What is needed now, to the extent possible, is restraint, which includes avoiding unnecessary flash points with the Palestinian population. This applies equally to plainclothes operations in sensitive areas and to home demolitions. Both those measures only add fuel to the fire.

As previously reported in Al-Monitor, demolishing the family homes of Palestinians who carry out attacks against Israelis has not proved to be an effective deterrent. It did not stop suicide bombers during the second intifada nor will it deter a young Palestinian man or woman from mounting a future attack.

On Nov. 14, the father of Shadi Mutawa gave up his son to authorities, identifying him as the perpetrator of a shooting attack the previous day in which Ya'akon and Netanel Litman were killed. Shin Bet reported that the father had gone to a checkpoint and notified the IDF forces there that his son was responsible for the shooting. It appears that the father feared that the family home might be demolished, or he objected to what his son had done. Regardless, this incident only reinforces the claim that Shadi Mutawa was not deterred from carrying out the shooting despite knowing the likely consequences — the demolition of his family's home. It is more than likely that such demolitions only enhance the motivation and desire for revenge among would-be assailants.

Thus, it will be Israeli measures that determine whether Israel and the Palestinian territories are in the midst of an intifada, which could last a very long time and spawn new terrorists daily, or whether the recent violence will be a transient wave that can be controlled by exercising prudence.