Instead of trying to calm tensions, the Netanyahu government advances bills encouraging the settlement enterprise and deepening the occupation. 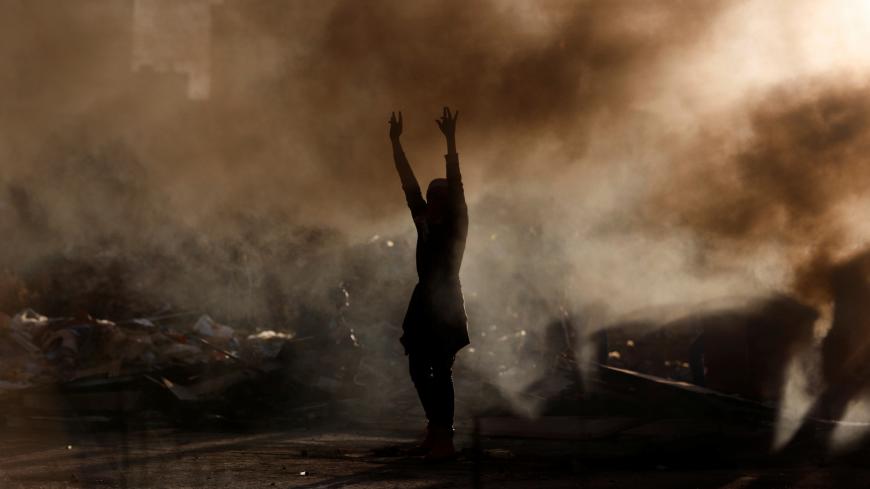 A Palestinian gestures as smoke rises during clashes with Israeli troops near the Jewish settlement of Beit El, near Ramallah, in the Israeli-occupied West Bank, Dec. 13, 2018. - REUTERS/Mohamad Torokman

The government’s only strategy is to "go from one use of force to the next without considering any measure, idea or tool that could restore calm. The only tools it uses are those that lead to further deterioration.” This was how the former head of Israel’s Mossad, Shabtai Shavit, described on Dec. 17 the approach of the government in the face of the violent escalation in the West Bank. Shavit, interviewed on Kan Radio, argued that decisions such as expelling terrorists’ families from their homes or bulldozing their homes, allegedly aimed at deterring potential terrorists, are unacceptable by international law, and their damage to Israel could far outweigh their benefits.

Indeed, by using more and more force, Israel’s right-wing government doggedly refuses to draw the obvious inference from its policies — deeper occupation, settlement expansion and destabilization of the Palestinian Authority (PA) — and the price Israel is paying and will be forced to pay for generations.

The decision adopted on Dec. 16 by the Ministerial Committee on Legislation was perhaps the strangest measure taken by the government recently, in that respect — a bill that has nothing to do with terror deterrence and everything to do with advancing the West Bank settlement ideology. In fact, the proposal simply exploits the current West Bank escalation for advancing that ideology. The ministers overwhelmingly approved the bill that was proposed by far-right Knesset member Bezalel Smotrich of HaBayit HaYehudi. If approved by the Knesset plenum, it would legalize more than 60 outposts and settlement neighborhoods built illegally on private Palestinian lands over the past 20 years. The bill also calls for the government to provide residents with municipal services and freeze all plans to raze their homes. What’s more, it authorizes the finance minister to guarantee mortgages taken out by settlers to buy homes in the newly legalized outposts.

Advancing this controversial bill was the government’s way of reacting to a string of Palestinian terror attacks against Israelis in the West Bank over the past week, especially the Dec. 13 shooting death of two soldiers adjacent to the outpost of Givat Asaf some 4 kilometers south of the established settlement of Beit El.

But how are these outposts actually being established? How do settlers manage to create a new reality on the ground? This week, former commander of the West Bank’s Binyamin District and one-time head of Israel’s Civil Administration in the West Bank Maj. Gen. (res.) Ilan Paz provided a step-by-step explanation on his Facebook page of how the settlers “exploit” the victims of terror attacks to create permanent settlements and how the country’s right-wing governments give in to them. He chose as a case in point the history of Givat Asaf.

This is what he wrote: “… In January of 2001, Asaf Hershkovitz was murdered in a terror shooting near the Palestinian village of Bitin. … Uri Ariel, then the head of the Beit El council (and currently the minister of agriculture from HaBayit HaYehudi), came to me and asked me to establish a temporary outpost (in his memory) for the seven days of the mourning, promising that he personally would ensure the settlers would leave at the end of week. … But the week became a month, and the month became an eternity. When I asked Uri Ariel to honor his promise and vacate the outpost, Ariel shrugged his shoulders and said it was out of his hands. Three times the division was about to forcibly vacant the outpost, and each time the Defense Ministry suspended the action. … Within a short time, a ritual bath (mikveh) was built at the site, housing caravans were brought and the temporary outpost became a settlement. Several attempts were made to present purchase certificates of the land, all out turned to be fake. … The settlement is located on private lands of the Palestinian residents of Bitin.’’

The government, however, not only took advantage of such events to beef up settlements and legalize outposts, but it also promoted additional measures against the better judgment of the heads of Israel’s security agencies and the government’s attorney general. On Dec. 16, the government’s Committee on Legislation approved a security Cabinet decision to advance legislation authorizing the expulsion of relatives of Palestinian terrorists from their West Bank homes, probably to the Gaza Strip. Shin Bet chief Nadav Argaman warned the ministers that their decision would have the opposite effect from the one they intended and would lead to further deterioration. Attorney General Avichai Mandelblit warned them that the bill infringes on constitutional rights and would generate international difficulties.

Prime Minister Benjamin Netanyahu already made one mistake on expulsion when he insisted on expelling to the Gaza Strip some of the Palestinian inmates freed from Israeli jails in a 2011 deal with Hamas in return for kidnapped Israeli soldier Gilad Shalit. Netanyahu essentially gave them a free hand to operate from Gaza, far from the PA’s security apparatus and the watchful eyes of the Shin Bet. According to Shin Bet assessments, since their expulsion to Gaza, some 200 of these “heavy” inmates — who have strong ties to the West Bank — have helped rebuild the Hamas military wing’s operations in the West Bank that Israel crippled during the second intifada (2000-2005). They issue instructions from Gaza to operatives in the West Bank, transfer funds and ensure training, and they were probably involved in last week’s terror attacks.

However, Netanyahu, Education Minister Naftali Bennett — who is pushing for the expulsions law — and other members of the security Cabinet do not seem interested in implementing the lessons learned from the second intifada. They ignore the need to distance Palestinian civilians as much as possible from armed activities. Israel implemented this policy successfully during the wave of terror attacks launched in 2015 when military Chief of Staff Lt. Gen. Gadi Eizenkot insisted on refraining from collective punishment of the Palestinian population. He argued that collective punishments would only drag the Palestinian population into the circle of violence and increase the motivation for revenge.

Meanwhile, Netanyahu himself has ordered authorities to speed up the destruction of terrorists’ homes, despite the controversial nature and questionable efficacy of this measure. On Dec. 17, the army demolished part of the family home of Ashraf Na’alwa, who murdered Israelis Kim Levengrond-Yehezkel and Ziv Hajbi on Oct. 7 at a factory in the Barkan Industrial Zone where he was employed. The timing was designed to signal to right-wing voters that Netanyahu and his government are fighting terrorism with an effective deterrent. With a hairbreadth parliamentary majority of 61, Netanyahu’s government is on shaky ground. It is more interested in pacifying its right-wing constituents than considering the disastrous consequences of its actions.

The government’s task now should be to restore calm, not fan the flames. Continued use of force against the Palestinians in the West Bank would actually have the opposite effect, as Shavit warned.