Libya’s militias take justice into their own hands

Libya's police say the country's justice system is collapsing, as courts often fail to prosecute crimes for fear of the suspects' affiliation with militias and armed groups continue to take matters into their own hands. 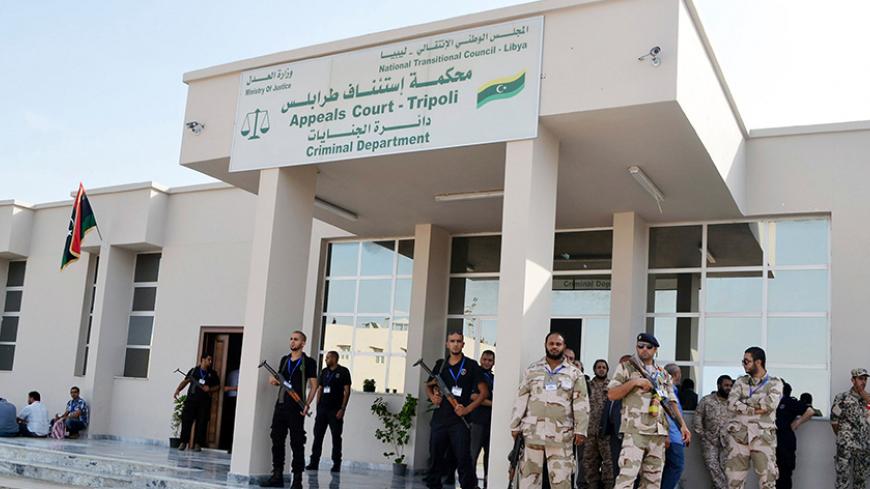 "Abdallah," who did not want his real name used for fear of retribution, is a criminal prosecutor at Tripoli’s courthouse. When asked about the justice system in Libya, he said, “It’s working, but not properly. However, it’s not collapsing.” He added, “The very fact that I cannot use my real name is indicative of the difficulties we face.”

Abdallah has worked as a prosecutor for the last 12 years. He has investigated all sorts of crimes under the regime of Moammar Gadhafi and in the aftermath of the revolution. In his Tripoli office, he told Al-Monitor, “Under the former regime, neither me nor any other colleagues were forced by the former regime to do anything against the law.”

Before 2011, Abdallah investigated many high-ranking officials including security personnel. He said none of them “disrespected us or our work. They were very respectful of what we did and answered all our questions.” Today, however, the lack of a strong central government and the near collapse of the state mean little respect for the law, and even less for law enforcement institutions.

When asked about the claims made by various media outlets after the regime was toppled in October 2011 and after Gadhafi himself was murdered that Libya’s justice system is not independent and that former regime officials, including Gadhafi himself, used to call prosecutors and tell them what to do, Abdallah denied them all, saying, “The former regime might have intervened on behalf of someone, but they did it within the system, not over it.”

He explained, “They would, for example, intervene on behalf of someone at the police station before the case reached the courthouse, but once it was there no one ever called us.”

Abdallah, like many prosecutors in Libya today, worries about his personal safety since he could be targeted if he happens to handle a case in which militias are involved.

Human Rights Watch has documented many cases in which the Libyan judiciary has not been compromised. “We walk a fine line when handling cases including murder, kidnapping and extortion,” Abdallah told Al-Monitor as we waited for his next case to reach his office. The problem, he said, is that the official police forces are weak, underfunded and unprotected, outgunned by militias that are affiliated with the Interior Ministry, but have an almost entirely free hand.

Al-Monitor spoke to a Tripoli police commander, who asked that neither his name nor his rank be disclosed. "Ahmed," a pseudonym, explained, “Policemen in uniforms, in many cases, do not go and arrest criminals because we never know if the suspect belongs to a militia or not.” To avoid possible trouble with armed militias with no regard for the law, the police leave it to certain militias, such as the Tripoli Brigades, to arrest and lock up criminals. A high-risk suspect may remain in a militia-run jail.

With arms widely available in Libya, militias are the best force to do this kind of work because “they are protected,” as Ahmed puts it. The suspect could belong to another militia, meaning that if there are any repercussions for his group from his arrest, it is likely to try to free him by force.

The police station Al-Monitor visited keeps weekly and monthly records of crimes, and the numbers are staggering compared to crime rates in the capital before 2011. According to their records, on any given day there are at least two murder cases, three armed robberies, three to four car thefts and two kidnappings. Other crimes like assault, threats of violence and rape are also rife, but no statistics were disclosed. According to Ahmed, the crime types and rates in the capital are "unprecedented." He said, "I have been here for the last 15 years but I have never seen crime flourishing like it is now.” Certain crimes are somewhat new to Libya, particularly kidnapping and murder. There was a time when such crimes were very rare.

In Libya’s southern capital of Sabha, the main police station keeps a Facebook page updated every month with the number and types of crimes. In February, for example, 12 cars were stolen, nine people were kidnapped and 24 people died — 22 of them were murdered while one was electrocuted trying to illegally tap into the electrical grid.

None of these crimes were fully investigated and most were attributed to unknown perpetrators. In such cases, people usually take revenge for what they speculate happened and go after the murder suspect on their own. Particularly in murder cases, this practice leads to a vicious cycle of vengeance, which in many cases can be stopped only by local social councils made up of elderly individuals and tribal leaders, as in the recent case in which the Warfalla tribal leaders succeeded in stopping bloodshed between the Oulad Suleiman and al-Gaddafa tribes.

Though most crimes in Tripoli are investigated, very few are solved. At some stage of the investigation, the police will just leave the file open but give up on the case. Ahmed’s investigators usually know who did what, but they often cannot touch the suspect.

When a case reaches the prosecution stage, it means that a militia was involved in bringing the accused to justice, but that is no guarantee that he will be found guilty, as the prosecutors would be more concerned with his militia connections than the evidence against him.

“We usually ask questions related to who that person is more than what he did,” as Abdallah put it. If the suspect is well connected, the case is usually closed or shelved or the accused is “kept in a jail center controlled by the militia that is protecting him with no access for us to do our work, and after a few days he is released!” he complained.