A group of armed men cut off water supplies to the Libyan capital Tripoli, which indicates the fragility of resources in a country plagued by chaos. 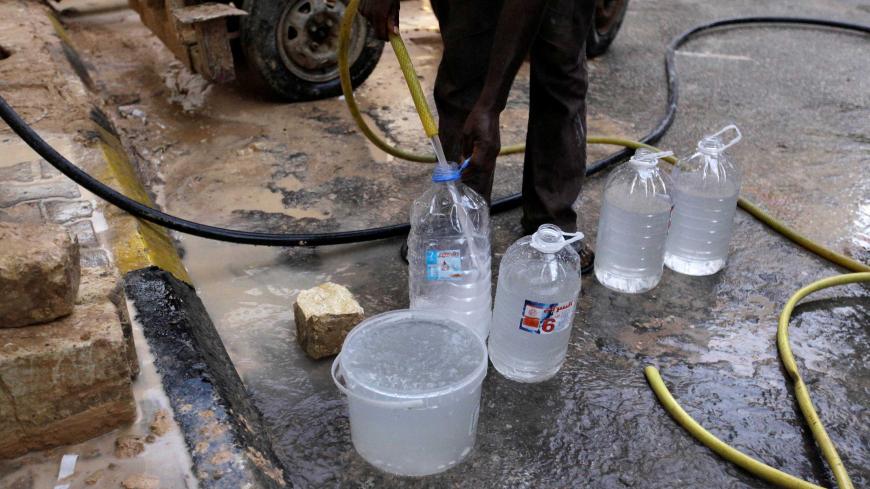 A man fills bottles and a bucket with water in Tripoli, Libya, Oct. 26, 2017. - REUTERS/Ismail Zitouny

Libya’s natural resources, including oil and freshwater, continue to be abused and used for different political ends by various militias, particularly those in close proximity to the oil fields, for example, in the southern parts of the country.

On Aug. 21, 2011, when most of Tripoli fell to the rebels, six months after the start of the civil war, water supplies were cut for three days, making the already difficult conditions there even more miserable. Ever since, hardly a year has passed without water failures because of sabotage, power shortages or for political reasons. Taps at homes have typically gone dry for a week or less, but the latest cut dragged on for over two weeks, from Oct. 17 to Nov. 1.

When oil exports are disrupted, it is usually reported in the international media since oil is an important commodity to Libya and its international clients. But when the disruptions are about freshwater, for example, it is less likely to be reported by the global media.

The main reason is that not so many people outside the country know that Libya’s freshwater is supplied by a man-made river that runs about 4,000 kilometers (2,500 miles) to serve the major population centers, agriculture areas and industrial zones all over the huge, mostly desert country.

The long underground network of pipelines with a diameter of 4 meters (13 feet) transports freshwater from abundant aquifers in the southern desert to the thirsty north, where the country’s population is concentrated.

Currently, the river provides more than 70% of freshwater consumed across the country. The project was the brainchild of late Libyan leader Moammar Gadhafi. Known to have had many dreams, Gadhafi made it his responsibility to provide freshwater for his people.

The project cost the country a great deal of money during a very difficult economic and political period of Gadhafi's long reign. When the project started in 1983, Libya was under all sorts of international and regional embargoes, particularly from the United States and Western Europe. Libya’s political and economic relations with the outside world were at their lowest. The country was unable to get loans or any technical help from global institutions like the World Bank or the International Monetary Fund.

Yet the project went on. By 1991, water started to flow, reaching all major cities, including Benghazi, Tripoli and Misrata, and all agriculture projects. The man-made river was financed by local investments and taxes imposed on luxury goods and services, including air travel, tobacco and various imported nonessential consumer items.

However, the situation changed drastically after the Gadhafi regime was toppled and the rebels killed the very man who made the river in October 2011 under still unknown circumstances and without trial.

The current water cut, however, is mainly in western Libya, including the capital Tripoli, for political reasons. The episode started on Oct. 10, when a group of armed men using four-wheel drive vehicles made their way from southern Libya to Warshefana, southwest of Tripoli, and positioned themselves in deserted army barracks.

They claimed to be Gadhafi loyalists trying to take over Tripoli. However, at the first confrontation with the Special Deterrence Force (SDF), a militia loyal to Libya’s Government of National Accord, they lost and were quickly forced to withdraw after two of their leaders were captured by the SDF, who posted their pictures on Facebook.

The two men, according to the militia, are a Libyan army officer named Al-Mabrouk Ehnish and a Sudanese national named Imam al-Fighi, who is said to be affiliated with the armed Justice and Equality Movement operating in Sudan’s northern region of Darfur, bordering southeastern Libya.

Ehnish hails from the Magharaha tribe in southern Libya, from where water is pumped to western Libya through the man-made river supplying Tripoli, home to over 1 million people.

Ehnish’s friends posted a video on YouTube threatening to cut the water unless he was released within a few days. Ehnish was not released, and the deadline passed. The water was indeed cut, driving Tripoli residents to buy water in mobile water tanks at high prices.

The problem was solved through the most unlikely of mediators: a man condemned to death by a Tripoli court in July 2015. Magharaha happens to be the tribe of Abdallah Senoussi, Gadhafi’s former intelligence chief for decades. Senoussi has been in prison since Mauritania handed him over to Libya’s new authorities in 2012. From his prison cell in Tripoli, he has played a key role in solving serious disputes in southern Libya, where he still commands respect and wields influence.

Well-informed sources within the Tripoli Revolutionary Brigade, in charge of Senoussi’s prison, told Al-Monitor on condition of anonymity that Senoussi was approached for help by the authorities in Tripoli. One week passed before Senoussi intervened with a simple phone call he made to his relatives. It is not clear if the deal he struck involved the release of the men captured by the SDF or not.

Lack of a strong and stable government will mean the country’s freshwater and oil production are at the mercy of criminals. Oil exports, the country’s main source of income, have been repeatedly cut by disgruntled militias over financial disputes, employment or regional gains. The National Oil Corporation’s most recent estimates put the losses at around $60 billion.

On Nov. 2, another armed group closed an oil field operated by a German company in southeastern Libya, demanding jobs and local development. The National Oil Corporation is still negotiating with them, trying to break the deadlock and reopen the field.

Be it the man-made river, oil fields or oil terminals, the livelihood of Libyans will always be hostage to different armed groups for whatever reason as long as the central government is almost absent across the country and as long as no effective security is implemented all over Libya.