Israeli ties with Egypt may be thawing, but no 'love and warmth' just yet

In an interview with Al-Monitor, Zionist Camp Knesset member Ksenia Svetlova claims that while progress is being made, Egyptian society is still influenced by anti-Israeli discourse and not yet ready for normalization. 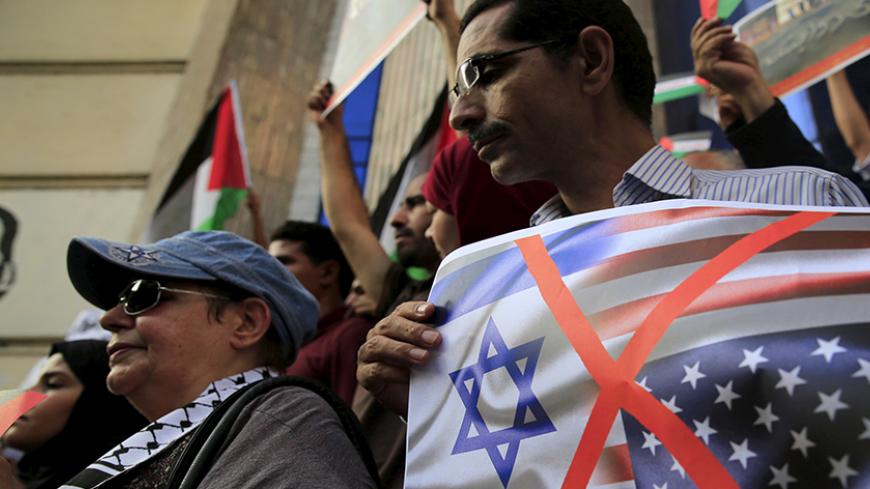 Activists shout slogans against Israel during a protest in front of the Syndicate of Journalists in Cairo, Aug. 2, 2015. - REUTERS/Amr Abdallah Dalsh

“We should not be looking for love and warmth from the Egyptians. We should be looking for quiet and helpful cooperation instead,” Knesset member Ksenia Svetlova of the Zionist Camp told Al-Monitor in response to the suspension of Tawfik Okasha from the Egyptian Parliament. The parliamentarian was punished for inviting Israel’s ambassador to Egypt, Haim Koren, to his home for dinner. Okasha also had a shoe thrown at him in parliament, an incident that received wide coverage in the Egyptian media. The Israeli media also made much of the incident, and there has been speculation that Okasha had actually been sent to meet with the ambassador by President Abdel Fattah al-Sisi. If so, he would have been a test balloon, sent to see if it was possible to tighten relations between Egypt and Israel. Today, those relations consist primarily of military cooperation.

Svetlova, who was born in Russia, is an expert in Middle East affairs and a former commentator on Arab affairs for Channel 9. While working as a journalist, she covered the Arab Spring in Cairo’s Tahrir Square. Today she is completing a doctorate, writing her dissertation on coverage of Israel in the Egyptian media from the dawn of peace in 1977 up until 2011.

Al-Monitor:  Do you see the incident involving Okasha and the Israeli ambassador as indicative of the normalization of Egypt’s ties with Israel?

Svetlova:  No. There is still a long way to go before that. The truth is that I was very surprised that anyone even expected normalization between Egyptian and Israeli society now, of all times. The Egyptians are willing to accept Okasha’s attacks on Hamas, but they are not willing to accept his support for Israel. The fact that he opposes Hamas does not mean that he can support Israel. A distinction must be drawn between military and agricultural cooperation, which always exists, and normalization between the two societies themselves. Egyptian intellectuals have not changed their position, which is a classic Nasserite position that advocates struggle until the ends are achieved — and that includes the goals of the Palestinians. The circles of hatred toward Israelis have not disappeared, and no one is trying to dismantle them. That is why I was so surprised by Israel’s optimism.

Nevertheless, I also want to note that there have been a lot of improvements in the relationship between the two countries. Security and intelligence cooperation are currently more significant, and there are even slightly fewer manifestations of open hatred and incitement in the Egyptian press. That is the impression I get from reading the daily papers. There are fewer expressions of anti-Semitic and anti-Israeli rhetoric compared to the 1990s. Obviously, that is a positive change. When I speak to my friends there, some of them business people, they tell me that personally, they would like to see a thawing of the relationship between the two countries, and that they could benefit from that economically. Nevertheless, they note, they are also realists, so they don’t think that such a change is possible right now.

Al-Monitor:  What are the reasons for that?

Svetlova:  It stems from the fact that ever since the revolution in Tahrir Square, the Egyptians have been much more focused on what is happening in their own country. They have plenty of problems with the Islamic State. Furthermore, the media is much freer. It is more independent and not managed by the regime itself. That is a significant change. Perhaps over time that will slowly bring about change, but it certainly won’t happen all at once, and definitely not when the education system hasn’t changed, when the entire media hasn’t changed. There is almost no pro-Israel coverage, or coverage of Israel’s intellectual and economic achievements. They still sell "Mein Kampf" and "The Protocols of the Elders of Zion" at Egyptian book fairs. The hatred toward us exists, and there are people in Egypt who make a point of feeding it, including both Islamists and radical leftists. Right now, no one has it on their agenda to change attitudes toward Israel; so yes, they cooperate with us when it is convenient, but they make a point of not appearing too close to Israel.

Al-Monitor:  Does it have to do with Israel’s policies in the territories and the occupation?

Svetlova:  I wouldn’t connect everything that is happening in Egypt to what is happening — or not happening — here. What we must remember is that even in the 1990s, when the PLO recognized Israel and peace accords were signed, it really had no impact on the way Israel was covered by the Egyptian media or the public in general. Reservations about us never really disappeared. There were cases of Israeli flags being burned and anti-Israel songs being performed. I can’t say that things would be different if we would only act differently. The situation is much more complicated than that. I sometimes see Egyptian bloggers writing that they have to contend with the Islamic State. They say that they have plenty of problems and that Israel isn’t their enemy. On an individual level, however, all that hasn’t clicked yet, and I don’t expect it to click soon. During the Arab Spring, there were conspiracy theories that Israel is behind the revolution and that it was intending to tear Egypt apart. In other words, the problem runs very deep.

Svetlova:  Only a small fraction of Egypt’s 90 million citizens are hooked up to the social networks. At the same time, exposure to new media actually often serves to reinforce prejudices against Israel. Nevertheless, I detect a glimmer of change. It is very slow, but it is still possible to point to the beginning of something. So, for example, the Egyptian TV series “The Jewish Quarter,” which aired during Ramadan, depicted the relationship between Jews and Egyptians before 1947 in a positive light. That is a ray of hope, as far as I am concerned. It was something about us that wasn’t negative. It showed Jews without horns and a tail. Nevertheless, it is still far from being part of the general consensus.

Al-Monitor:  Do you mean it won’t happen in our generation?

Svetlova:  I don’t get the impression that the change will happen in this generation. It will take time. In order to bring about such changes to the popular consciousness, it is first necessary to destroy the seeds of hatred through education and the media. That is nowhere near happening. This is true even if there is no fighting or even open hostility between Egypt and us, and in fact, we cooperate in certain areas.

At present, we are in a situation in which the Egyptian government is maintaining and preserving its relationship with us, but on the other hand, it doesn’t want to declare itself our friend. Former President Hosni Mubarak also went through all sorts of stages in his relationship with Israel. For example, when there was agricultural cooperation, there was an article in one of the Egyptian newspapers that Israel was poisoning Egyptian farmers. The editor of that paper was actually appointed by Mubarak. Incongruities like that have always existed.

Al-Monitor:  What is Sisi’s position? In an interview with The Washington Post, he said that he speaks frequently with Netanyahu.

Svetlova:  It is in Egypt’s interest to cooperate with Israel, because what is happening in Sinai — the infiltration of the Islamic State and other terrorist organizations — is important to Sisi, and he needs Israeli intelligence to counter it. It is all a matter of survival. Sisi is a very clever man. If Israel would take positive steps toward the Palestinians, it would certainly make it easier for him to take small but positive steps in our direction. Even then, however, these steps could not be dramatic. I do not believe that the public opinion in Egypt will change dramatically the moment we relaunch peace talks.

Al-Monitor:  Do you see any chance of Prime Minister Benjamin Netanyahu paying a historic visit to Cairo? There have been reports of that possibility recently.

Svetlova:  I would really love to see that, but I don’t think it will happen now. This is not the time for it, either. The relationship between the two states is good, but it is not a good idea to publicize that. Sisi has a lot on his plate, including Islamic State attacks, even in Cairo. This poses a big challenge to him, especially after he boasted that he restored security to the streets of Cairo. Politically, I think that we should stop looking for love and warmth, not from the Egyptians, and not from the Palestinians either. We need to focus on realpolitik, to consider what is best for our country and the advantages we stand to gain from partnerships, even quiet partnerships. Sometimes, the rush to announce something that doesn’t exist yet and isn’t even ready is actually detrimental to us. We have to accept things as they are. The Arab states, and Egypt in particular, are in the middle of an enormous struggle. They really aren’t that interested in us now, so we should let things calm down first.