MK Svetlova: Abbas not ideal partner, but best we have now

In an Al-Monitor interview, Zionist Camp Knesset member Ksenia Svetlova described Palestinian President Mahmoud Abbas as a "missed opportunity'' and laid most of the blame for the current diplomatic impasse on Israel. 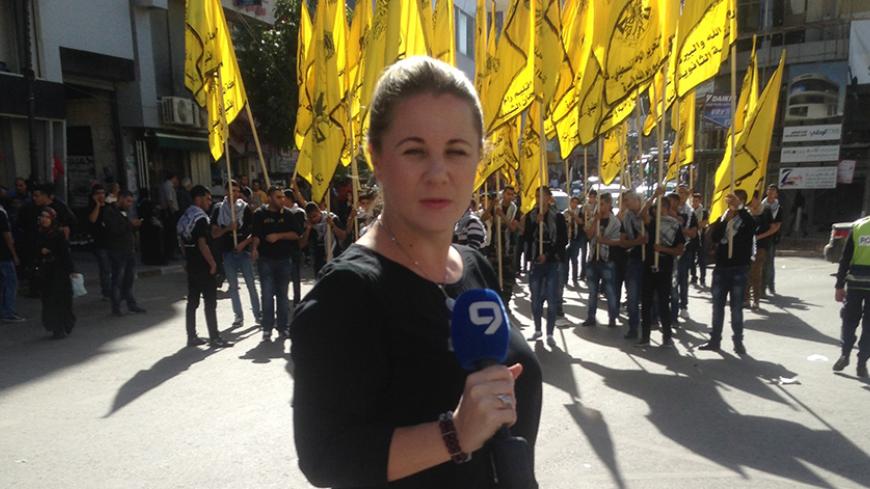 In late August, Knesset member Ksenia Svetlova of the Zionist Camp visited Ramallah, where she met with senior figures in the Palestinian Authority (PA). She has known them since her time as Arab Affairs correspondent for Channel 9, an Israeli Russian-language TV station.

Born in Moscow and fluent in Arabic, the 37-year-old parliamentarian thought it important to hear top-ranking Palestinian officials in an unmediated format. This, she thought, would provide her with an up-to-date picture of what is happening in the PA. It is hardly surprising that she came away from her visit with some disconcerting realizations: Hamas is resurgent and getting stronger; President Mahmoud Abbas has lost most of his legitimacy among the Palestinian public, which is disappointed with his performance; and the person who keeps popping up as a future leader is Marwan Barghouti, currently serving a life sentence in an Israeli prison.

“It is not a good sign, as far as Abbas is concerned. It is an expression of the enormous disappointment felt about his promise to resolve the conflict diplomatically, without resorting to violence,” Svetlova told Al-Monitor in an interview. “Barghouti is a terrorist who has become something of a mythical figure. That worries me a lot, because it reflects the disconnect from the pragmatic approach characteristic of the Palestinian leadership over the past decade. The Palestinian public is desperate, and desperation breeds bad things, like a return to violence by lone wolves.”

As someone who in the past used her Russian passport to cover the war in Iraq and the revolution in Tahrir Square, who reported from Lebanon and the Syrian border, and who interviewed the late Palestine Liberation Organization Chairman Yasser Arafat as well as Abbas, Svetlova has a hard time separating herself from her work in the field as a reporter. She still makes a point of staying in touch with her sources.

Al-Monitor:  What do you think of Abbas’ recent threat to resign?

Svetlova:  Abbas is well known for his dramatic announcements and threats to resign. I am not too impressed by this particular threat. I think he left a door open for people to beg him to stay by telling him that everything will fall apart if he leaves. On the other hand, it is not out of the question that he is acting like this because of foreign pressure. I know that such pressure exists, because I am also in touch with foreign ambassadors, who are trying to mediate between Gaza and Ramallah and advance a reconciliation between Fatah and Hamas. It is possible that he can no longer withstand the pressure. The demand for such a reconciliation is crucial, because it is impossible to rebuild Gaza without it. I know that there is a lot of criticism from Egypt over what is happening in Ramallah. It seems to me that the way the Muqata [PA headquarters in Ramallah] is reading the current map is unrealistic, but maybe something will change as a result of pressure emanating also from Arab capitals. Of course, it is not totally unfeasible either that Abbas will resign in favor of someone from his inner circle.

Al-Monitor:  Whose fault is it that there is no diplomatic process?

Svetlova:  Most of the fault lies with the Israeli side, because we hold the keys. I am not denying that Abbas and everything happening on the Palestinian side are also responsible. Abbas’ request to join the various international organizations right in the middle of negotiations and before the fourth release of [Palestinian] prisoners by the previous government [in 2014] was more than just problematic. What was he thinking? How was that supposed to bring an end to the conflict any closer?

In general, I think that Abbas is a missed opportunity and a lost promise. A lot of people are responsible on our side. [The late Prime Minister] Ariel Sharon did not take advantage of the opportunity that presented itself and decided to act unilaterally in the most miserable way possible. By the time [former Prime Minister] Ehud Olmert stepped in, it was already too late, while [current Prime Minister] Benjamin Netanyahu is doing everything he can to subvert the process.

Netanyahu has a problem with the whole idea of Abbas being a pragmatist that we can talk to and maybe even reach an agreement with. That is why Netanyahu does everything he can to avoid him. We just wasted 10 years. When Netanyahu now says that he is prepared to go to Ramallah, I ask myself, Exactly who is he planning to meet there? With an 80-year-old leader who has lost the vast legitimacy he had back in 2005? I remember how people were all dreamy eyed when they saw Abbas after the long intifada and hoped that the economy would flourish. That never happened, and it’s too bad it didn’t, because I don’t know when the next opportunity will be. The current [Israeli] political leadership demonized Abbas, just like they demonized the leadership of the left. Yes, it’s true that Abbas is not the ideal partner, but he’s the best partner we have right now.

Al-Monitor:  Is the two-state solution no longer relevant?

Svetlova:  With the expansion of the settlements, it is slipping through our fingers. Nevertheless, it is still on the table. The right’s claim that this means just handing over territories to the Palestinians is nonsense. It is actually about determining our own borders, without which we would be lost. Everyone can now see what happens in multinational states like Syria. We need to focus on shaping clear, defensible borders and achieving a complete split with the Palestinians. I don’t expect to see a Singapore or Hong Kong or Switzerland here, but we have to determine our borders. We are facing a clear and tangible threat of a binational state.

Al-Monitor:  Do you think that the center-left, with which you identify, has failed to convince the public that its way is the right way?

Svetlova:  It is in fact a huge failure since the left has allowed the right wing to dominate the public discourse. Being a leftist today is akin to bearing a mark of shame. The term is often accompanied by words like “naive” and “traitor.” I compare it to what my family experienced in the Soviet Union, and frankly, I am worried. People who tried to oppose the regime there were immediately branded as traitors. My paternal grandfather disappeared in a concentration camp because he criticized the regime.

We haven’t reached that point, but it reminds me of how easy it is to overgeneralize and brand an entire group as traitors, only because they see things differently. All sorts of overly simplistic slogans like “We gave them land and they gave us Qassam rockets” are dominating the conversation. There are members of the Knesset’s Foreign Affairs and Defense Committee who think it is legitimate to use a bulldozer to tear down the Supreme Court and who are silent when settlers attack soldiers.

Al-Monitor:  Unlike you, the Russian community in Israel tends to support the right. Do you have an explanation for that?

Svetlova:  The Russia public is a sector held captive by politicians who exploit it in a cynical manner and speak to it in an incendiary way, replete with all the requisite stereotypes. Furthermore, the Russian-language media is controlled by oligarchs, who are close to the right. This makes it impossible to hear other opinions. Differing opinions tend to be mocked as the views of the naive and dangerous left.

Personally, I don’t believe that concepts like right and left are relevant anymore, because Russians lean left on social issues. Nevertheless, it really worries me that people who are eager to learn about what is happening in the Middle East are not being given truthful information. For example, the issue of what will happen if we are forced to contend with 4 million Palestinians living among us and what the alternative to that is.

Al-Monitor:  What do you think about a regional [peace] initiative? Maybe the solution will come from this direction?

Svetlova:  It is very popular now. There are people in the Likud and other parties who like to talk about a regional arrangement and regional cooperation. Based on what I know about the region, however, I don’t think anyone will really rise to the challenge. Ultimately, the process must be between us and the Palestinians. The Arab League and Egypt can provide support, but I am convinced that they will not lift a finger to do anything more than that.

What is happening is that they [the people talking about a regional arrangement] are intentionally throwing sand in the public’s eyes and selling them the illusion of a regional initiative because they don’t actually want to do anything. I contend that we cannot replace our Palestinian partners with anyone else.

Al-Monitor:  You have created a lobby in the Knesset to preserve and promote the heritage of Jews from the Arab states. Why do you consider this issue so essential?

Svetlova:  I think it is very important. People say to me, “You’re not from there. What do you care?” and I answer that it is part of my culture. It is part of the culture of the Jewish people. It is the only way we can draw closer to one another.